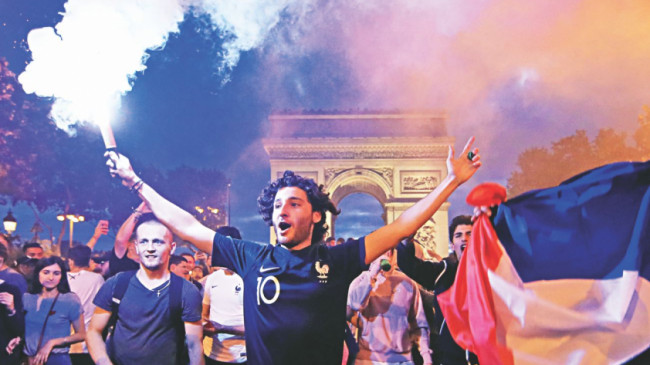 A French court gave two men suspended sentences Wednesday and fined a third for robbery and violence on the sidelines of France's World Cup victory celebrations.

One fan, wearing a shirt of the French football team, was given a six-month suspended sentence for breaking into a Piaggio scooter showroom near the Champs-Elysees boulevard where hundreds of thousands had gathered to welcome home the winning team.

A witness had photographed the suspect sitting on a scooter in the showroom.

The man, a 23-year-old fork lift driver, admitted to the robbery, but denied taking part in any violence, blaming his actions on excessive alcohol.

A 19-year-old student, who was caught stealing sunglasses from a Grand Optical store on the Champs Elysees, was ordered to pay a fine of 1,000 euros ($1,200).

“In the euphoria, everyone converged on the store. I followed. I was stupid,” he told the judge.

A third man was given a three-month suspended sentence for throwing bottles at police officers.

“I don’t know what went through my head. I’m sorry,” he said. He also claimed to have been drunk, even if breathalyser tests had been negative.

Nearly 300 people were arrested across the whole of France on the sidelines of the victory celebrations, with 57 arrests made in Paris, prosecutors said.