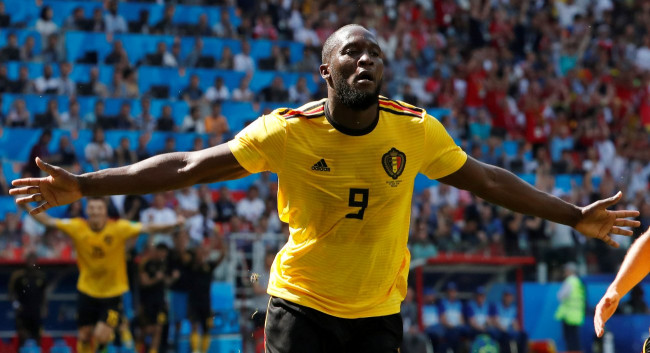 Roberto Martinez revealed that Romelu Lukaku is an injury doubt for Belgium's World Cup blockbuster tie against England after the in-form striker picked up an ankle injury on Saturday.

Lukaku and Eden Hazard both netted twice as the Red Devils routed Tunisia 5-2 to leave them top of Group G and on the verge of the last 16.

But the Manchester United forward came off in the second half at the Spartak Stadium in Moscow.

"We need to look at Lukaku's ankle. He took a knock and has to be assessed," said Martinez, who revealed man-of-the-match Eden Hazard also picked up an injury.

"Eden Hazard has a calf knock, Dries Mertens has an ankle problem. There will be major changes against England.

"If we could have seven days to prepare, I'd say we'd start with the same team, but the reality is that you are only as good as the 23 players."

Lukaku's absence would be a blow to Belgium's hopes against England, with top spot in the group likely to be at stake.

The United player already has four goals at Russia 2018 to leave him as joint top scorer alongside Portugal's Cristiano Ronaldo.

However, there was some good news for Belgium boss Martinez, with Chelsea midfielder Hazard expected to be fit to face England in Kaliningrad on Thursday.

"I felt something in my calf in the first half but nothing big and I think I will be OK tomorrow," he said.

Argentina and Nigeria will be battling it out for a last-16 spot of Group D in the World Cup at the Krestovsky Stadium in Saint Petersburg.

Argentina are currently enduring their longest winless run in a first-round World Cup group stage in history. Nigeria, on the other hand, has an advantage over Argentina in terms of points but has lacked consistently so far in the Group Stage. Nigeria are second in their group and could qualify should they beat Argentina. The South American side, however, still have a final shot at making it to the last 16 if they are to beat Nigeria, and if Croatia managed to avoid defeat to Iceland.

The match is scheduled to start at 12:00 am in Bangladesh time. Let’s look at some of the statistics ahead of the thrilling encounter.

England coach Gareth Southgate was keeping his feet firmly on the ground after England's 6-1 World Cup group-stage rout of Panama, declaring "I didn't particularly like the performance".

Southgate was speaking after a hat-trick from Harry Kane, a double from John Stones and another from Jesse Lingard saw off Panama and qualified England into the knockout stages.

As it stands England are level on goal difference with also-qualified Belgium but top the group by virtue of yellow cards -- two compared to the Belgians' three.

The countries meet in Kaliningrad on Thursday.

Asked about possible changes to his XI to face Belgium, Southgate commented: "I want to keep the momentum, we have to think about the team we want to put out, it's an opportunity for players who need a match who haven't played for a while but on the other hand we want to keep winning.

"It's a nice decision to have!"

Reflecting on a record World Cup win for England -- their previous best result was 3-0 -- he added: "I was a bit anxious at the start, they (Panama) had six at the back and three in middle, but once we worked that out I thought we played some really good stuff for 35 minutes.

"At half-time we talked about one more goal to be top of the group, that's why the goal at the end was disappointing," he said.

"We'd rather be in control of the group than not, and confidence wise it's important to score goals.

"It was a big moment for Lingard and great for the captain (Kane) to score a hat-trick, that way he didn't have the hump when I took him off!"

Russian police said early on Wednesday they had received multiple bomb threats in the World Cup host city of Rostov-on-Don, causing bars and restaurants to be evacuated across the city.

"On June 26, police received a series of phone calls about explosives planted at locations in Rostov-on-Don," local police said in a statement.

"Police forces made all the necessary checks and no dangerous objects were found," the statement said. "Currently, all the venues are operating normally."

Increasingly isolated on the global stage, Russia is keen to use the World Cup to project an image of stability and strength. Authorities have vowed to host a safe event and any security incidents involving fans could jeopardise Moscow's efforts.

A policeman at the Topos Congress-Hotel in Rostov-on-Don, which was evacuated at around 2000 GMT on Tuesday, said 16 venues had been evacuated across the city as part of a drill.

On the other side of the city, a manager at the Luciano Italian restaurant said staff had been told to evacuate the building for around two hours after receiving a bomb threat.

"There was a phone call, an anonymous phone call, they said there was a bomb in the building," said the manager, who declined to give their name because they were not authorised to speak to the media.

A spokesman for soccer's world governing body FIFA was not immediately available for comment.

The Russian city of Rostov-on-Don, some 955 km (593 miles) south of Moscow, has so far hosted four matches in the World Cup, including Croatia's 2-1 win over Iceland earlier on Tuesday. The next scheduled match at the venue is on Monday.

The city is just a short distance from Russia's border with eastern Ukraine, where rebels backed by Moscow have been fighting Ukrainian troops since 2014, and its close proximity to the conflict had caused security concerns ahead of the tournament.

The Topos Congress-Hotel is listed as an official World Cup hotel by FIFA, but none of the competing teams are staying there, according to official documents.

Police at the scene said the hotel had been evacuated due to a bomb threat and sniffer dogs were seen entering the building, a Reuters witness said.

Security services were seen questioning people on the street outside the hotel, next to emergency vehicles and a crowd of around 60 evacuated guests who had not yet been allowed back into the building.

Russia was subject to a wave of hoax bomb threats last summer, causing disruption at businesses and public buildings in towns and cities across the country.

The Russian Federal Security Service said in October it had identified four Russian citizens behind the hoax campaign, who were living abroad and using internet phone services to call in the threats anonymously.

Sweden's preparations for their World Cup clash against Germany have been hampered by a stomach bug that has prevented three players from travelling to Sochi, where Saturday's game will be played.

Coach Janne Andersson revealed that defenders Pontus Jansson and Filip Helander, along with midfielder Marcus Rohden, were left behind at the team's tournament base further up Russia's Black Sea coast in Gelendzhik to avoid any danger of the illness spreading.

However, the hope is that they will recover to come to Sochi in time for the match.

"We have split the squad. We didn't bring them on the flight because we didn't know what had made them feel a bit queasy, but they will travel tomorrow," Andersson said at a press conference at Sochi's Fisht Stadium on Friday.

Sweden's team doctor said in a statement on the official Swedish FA website that the trio were "on the mend".

Of the three, only Leeds United defender Jansson played in Sweden's opening 1-0 win over South Korea, and that was because Manchester United's Victor Lindelof was ill.

Lindelof has travelled to Sochi and could return against Germany but there is a doubt over striker Isaac Kiese Thelin, who has an ankle problem.

While Sweden, who qualified for the finals after ousting Italy in a play-off, come into the game in a strong position, Germany are on the brink of a full-blown crisis.

A defeat at the hands of Mexico in the first match of their trophy defence means they cannot afford another slip-up in Group F on Saturday.

"This is really what you spend your whole career and life working towards. It is an extraordinary opportunity to be involved in a World Cup match like this," said Andersson.

"Whether we knock out Germany is one thing, but we have a chance to qualify and that is extraordinary."

Belgian international striker Romelu Lukaku is set to join Manchester United for a reported £75million ($97m, 85.5m euros), a record fee between British clubs, after the buying club announced Saturday they had reached agreement with Everton.

The 24-year-old's signing represents a coup for United and their manager Jose Mourinho as the latter's former club champions Chelsea had earmarked him as their top striking target for the close season.

It brings Mourinho and Lukaku back together again as the Portuguese manager in his second spell as Chelsea manager had sold him to Everton in 2014 for £28million.

United confirmed on Twitter agreement had been reached and said it was "delighted to announce a fee has been agreed with Everton for the transfer of Romelu Lukaku, subject to a medical & personal terms".