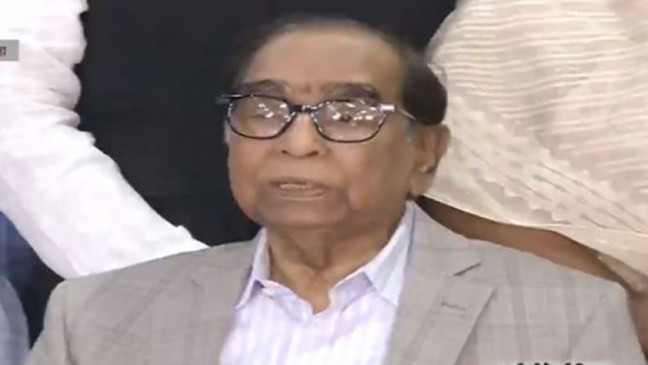 Prime Minister Sheikh Hasina today (August 14, 2022) said that she is fully aware of public suffering due to the record fuel price hike and load shedding, and completely empathises with them.

"We are aware of and fully understand the suffering of people," she said while speaking at the meeting with organising secretaries of Awami League from eight divisions at her official residence Gono Bhaban.

Hasina, also chief of Awami League, assured that her government will surely cut down the fuel prices when it will come down in the international market.

Referring to the ongoing countrywide load shedding, she said that people have to endure this pain for some more days.

"When the coal-fired power stations go into production, our energy problems will subside," she said.

"Our opposition is getting a scope to hold protests. Let them do that. I want that too," she said.

In this connection, she said that today she has directed relevant authorities to allow the opposition to continue their agitation and not to arrest anyone.

"If they want to besiege the Prime Minister's office, let them do that," she said.

She also said that people know very well that her government has tried with utmost sincerity to tackle the fuel price and electricity production.

"Opposition will try to utilise this, but if they do anything excessive, people will ultimately suffer more. They have to realise that," she said.

PM Hasina blamed Ukraine-Russia war, the subsequent sanctions and counter-sanctions for the current economic problems of the country that hit when it was turning around from the grip of pandemic's impact quite well.

"USA and Russia gain the most from the sanctions and counter-sanctions as the prices of US and Russian currencies have gone up," she said.

She also said that middle and lower-middle class people around the world are the worst suffers of the war, sanctions and counter-sanctions.

The premier came down heavily on a section of people who increased prices of essentials, taking advantage of war and fuel price hike.

She urged the people to increase production and produce whatever they can.

Recalling the August 15 bloodshed, she said she wonders why they killed her father, mother and brothers. "What were their faults?" – she asked.

She said that Father of the Nation Bangabandhu Sheikh Mujibur Rahman tried to establish a pro-people administration and decentralise the power to the grassroots of people.

"It seems that whoever wants to play a role in developing people's lives in this country have to face a cruel fate. This is the reality," she said.

She put emphasis on strengthening the party and its activities, and to stand by the people as it always did in the past.

She said that military rulers Ziaur Rahman, HM Ershad and ex-PM Khaleda Zia of BNP patronised and awarded the killers of Bangabandhu and granted them immunity from any court trial.

Prime Minister Sheikh Hasina has said the people voted her party to power after evaluating the fruit of development borne in her previous terms.

“The countrymen have gained benefit of the development work of my government, and thus they cast their votes for us,” She told foreign observers today.

She was speaking to observers from at least 30 different countries during a view-exchange meeting at her official residence Gono Bhaban this evening.

Hasina, also president of the ruling Awami League, said she fought for holding the election in a transparent manner so that people can exercise their voting rights.

She said BNP-Jamaat led alliance has plunged into a setback in the just concluded election as they have indulged in the acts of terrorism and corruption.

The premier also drew attention of the international observers so that they can play a role form their respective levels to accelerate the repatriation process of the Rohingyas from Bangladesh.

Imam, however, said the BNP's demand for a fresh election was unrealistic and urged it to accept the reality and help the new government, reports BSS.

Imam made the statements when the newly appointed five advisors to the PM yesterday placed wreaths at the portrait of the Father of The Nation Bangabandhu Sheikh Mujibur Rahman in front of Bangabandhu Memorial at Dhanmondi road 32 yesterday.

There has been confusion over the PM's talks with political parties as her second in command gave three different statements in this regard within three days.

On Saturday, Quader termed the opposition's demand for a dialogue “ridiculous” and said there was no need to hold talks. On the following day, Quader, also the road transport and bridges minister, said the PM would hold a dialogue with political parties. He said this after Hasina, at an AL central working committee meeting, hinted at holding such talks.

Quader again changed his position on Monday and said the PM would invite parties only to exchange post-election greetings with them, and not hold any dialogue.

Meanwhile, BNP Secretary General Mirza Fakhrul Islam Alamgir on Monday said the BNP-led Oikyafront would decide whether it would sit for a fresh round of talks with Sheikh Hasina, once the agenda is set.

Rejecting the December 30 election due to allegations of widespread irregularities and rigging, the main opposition alliance -- the Jatiya Oikyafront -- has been demanding that the government hold a national dialogue with all stakeholders for a fresh election in line with the constitution and laws.

Before the polls, Hasina held dialogues with 75 political parties at her Gono Bhaban residence over different major contentious issues, including the nature of the polls-time government and dissolution of parliament before the announcement of the election schedule, among others.

After the confusion created by Quader's statements, Imam yesterday said the PM would invite all political parties, who were earlier invited to the Gono Bhaban, to hold further talks.

He also said establishing good governance in all sectors was their major challenge, adding that corruption, militancy and drug abuse must be uprooted from society.

BNP candidate Abdus Sattar Bhuiyan has been elected in Brahmanbaria-2 following yesterday's re-polling in three centres of the constituency.

His closest rival Moyeen Uddin, an independent, bagged a total of 75,419.

Sattar had already been leading the polls with 82,723 votes, said Election Commission officials.

The number of constituents under the centres was 10,572. Only 4,300 voted yesterday, said Returning Officer Hayat-Ud-Dwollah Khan as he announced the unofficial result.

There were a total 132 polling centres in Brahmanbaria-2.

Including this, eight lawmakers have been elected from the BNP-led Jatiya Oikyafront. The Awami League-led alliance won 288 seats.