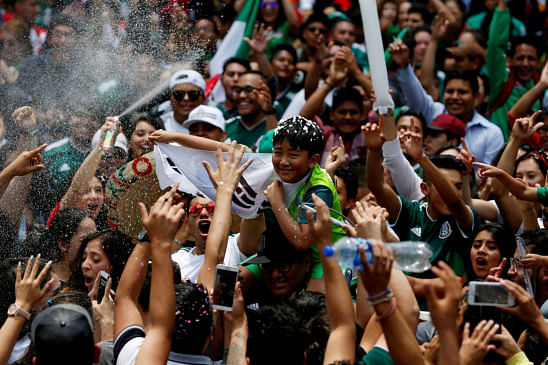 South Korea’s win knocked out defending champions Germany and helped Mexico to go through to the last 16. Hundreds of Mexican fans, delirious with delight, were seen flocking to the South Korean embassy in Mexico City.

In front of the South Korean embassy they were joined by South Korean consul general Han Bjoung-yin, who even appeared to have a shot of tequila with them in one video.

That’s the Korean consul general to Mexico, Byoung-Jin Han, celebrating with grateful Mexican fans outside the Korea embassy here. One fan said he took a shot of tequila with them earlier. pic.twitter.com/NGWEmRADUW James Wagner (@ByJamesWagner) June 27, 2018

South Korea needed to beat Germany and then have Mexico defeat Sweden to have a chance of advancing from the group stage.

But Sweden killed that hope with three unanswered goals that sealed the game midway into the second half in the other Group F finale. However, Mexico still advanced to the next round in second spot thanks to Germany's defeat.

President Donald Trump tweeted Sunday to congratulate the winning team, President Vladimir Putin, and Russia after the World Cup final, which he called "one of the best ever!"

"Congratulations to France, who played extraordinary soccer, on winning the 2018 World Cup. Additionally, congratulations to President Putin and Russia for putting on a truly great World Cup Tournament one of the best ever!," he wrote on his Twitter account on Sunday.

Earlier in the day, the national team of France defeated Croatia 4-2 in the 2018 FIFA World Cup final match in Moscow to snatch its second World Cup Trophy.

Congratulations to France, who played extraordinary soccer, on winning the 2018 World Cup. Additionally, congratulations to President Putin and Russia for putting on a truly great World Cup Tournament -- one of the best ever!

According to exit polls, the sharp-tongued, silver-haired politician known as "AMLO" won by a large margin over his two main rivals, who both conceded defeat shortly after the polls closed -- laying to rest concerns that a deeply divided country could face prolonged uncertainty over the winner.

Thousands of ecstatic supporters flooded central Mexico City's Zocalo square and Alameda park, celebrating to the sounds of mariachi music as Lopez Obrador slowly made his way there from his campaign headquarters in a motorcade, swarmed by huge crowds.

"The government was failing. We needed a real change," said one elated supporter, Jose Gutierrez, 44.

It is a major shift in Mexican politics: the PRI and PAN have governed for nearly a century, and Lopez Obrador will be the country's first leftist president in recent history when he takes office on December 1.

Three polling firms gave the former Mexico City mayor the win. Newspaper El Financiero's exit poll gave him 49 percent of the vote to 27 percent for Anaya and 18 percent for Meade.

Casting his ballot early Sunday at his polling station in Mexico City's Tlalpan district, he called the elections "historic."

"We represent the possibility of real change," he told hundreds of journalists crowded at the entrance, promising a "peaceful transformation" of the country.

Lopez Obrador's coalition -- led by the Morena party he launched in 2014 -- appeared to be on track for a strong showing in state and congressional races as well, winning six of the day's nine governor's races, according to exit polls.

That included Mexico City, where a woman was elected for the first time ever, the scientist and environmentalist Claudia Sheinbaum.

Two other states were too close to call, according to Mitofsky.

Lopez Obrador's coalition will have a majority in the lower house, and possibly in the Senate as well, according to the firm's exit polls -- a coup for a party contesting its first national elections.

After a campaign of lofty but vague promises, the new president will now face a big challenge to deliver, said political analyst Jose Antonio Crespo.

"He'll have Congress's support and a great deal of legitimacy, but things don't change magically," he told AFP.

"He's not going to be able to work miracles."

In a country awash in violence, the campaign has been the most blood-stained in Mexican history: 145 politicians have been murdered since September, according to consulting firm Etellekt.

Three political party members were shot dead on election day, according to local officials: a Workers' Party (PT) member in the western state of Michoacan, and two members of the ruling Institutional Revolutionary Party (PRI) in the central state of Puebla.

Most of the murders have been of local politicians, the most frequent targets for drug cartels seeking corrupt officials they can strike alliances with.

But Mexicans are deeply divided over Lopez Obrador, who was making his third presidential bid.

He has clashed with Mexico's business community, with some critics warning he would pursue Venezuela-style socialist policies that could wreck Latin America's second-largest economy.

Seeking to soothe, he has recruited a team of market-friendly advisers and backpedaled on his most controversial proposals, including reversing outgoing President Enrique Pena Nieto's landmark energy reform, which privatized the oil sector.

The country's Business Coordinating Council, one of its largest business groups, appeared ready to call a truce.

"We will work with the president-elect's team to build an agenda for stability, trust and development," its director, Juan Pablo Castanon, told a press conference.

The Mexican peso was stable on international currency markets.

Lopez Obrador will face a laundry list of challenges, including a lackluster economy and a thorny relationship with the United States under President Donald Trump, whose anti-trade, anti-immigration policies have turned diplomacy with Mexico's key trading partner into a minefield.

"AMLO" has vowed to put Trump "in his place."

But the US president appeared ready to start off on the right foot.

"I look very much forward to working with him," he tweeted. "There is much to be done that will benefit both the United States and Mexico!"

At least 15 people were killed and another seven wounded in a shooting at a nightclub early on Saturday in Mexico's violence-wracked Guanajuato state, according to the local prosecutor's office.

It was not immediately clear who committed the crime. Before sunrise, a group of armed men pulled up in three vans at the La Playa Men's Club in the city of Salamanca, burst into the premises and opened fire, local media reported.

A video taken after the shooting from the street near the nightclub showed a line of police vehicles. A woman wailed uncontrollably in the background as an ambulance drove into the area.

According to a statement from the Guanajuato state prosecutor's office, 13 men were found dead in the nightclub, and another two died after being taken to hospital. It added that its agents were investigating the crime.

Salamanca lies in Guanajuato state, part of the country's industrial heartland that was a magnet for carmakers such as Volkswagen AG, General Motors Co and Toyota Motor Corp, but it suffered a doubling of murders last year, making it one of Mexico's most violent regions, official data shows.

More than a decade after the launch of a militarized effort against drug cartels that has led to some of Mexico's bloodiest years on record, the latest effort will test the new government's ability to curtail the reach of organized crime.