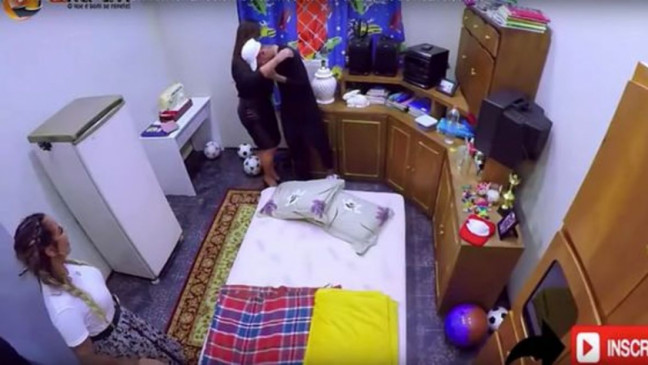 Neymar broke down in tears when he walked into a recreation of his tiny childhood bedroom on a TV program -- Caldeirão do Huck -- ahead of the World Cup. The Brazilian superstar’s parents and his sister made a surprise visit to that replica of Neymar’s first house  in San Vicente on the coast of Sao Paolo, and altogether they comforted him on that program.

As soon as he entered the room he broke into tears, walking around the room he picked up some items also. After a short time of reflection, Neymar's parents, his sister Rafaella and girlfriend Bruna Marquezine all eventually made their way into the room to share the experience with him. The replica house is the place where the PSG forward grew up, the bed room is full of footballs, football shorts and trophies.

His mother Nadine said: "He looked at me and asked me 'why mom?’ And I did not know how to answer him."

Neymar's parents and his sister helped the TV producers recreate the room, which also featured pictures from the family's past.

Brazil superstar Neymar has levelled with Romario for third position on Brazil’s all-time leading goal-scorer list as he scored his 55th for the country against Austria in an international friendly. Ronaldo and Pele are the two remaining targets for him as the 26-year-old needs just seven more goals to eclipse Ronaldo’s tally while he needs 22 more to conquer Pele’s and claim Brazil’s top scorer title.

Neymar achieved the feat on his first start since suffering a broken metatarsal in February, finding the net after 63 minutes of Brazil's final pre-World Cup friendly against Austria in Vienna on Sunday.

After coming on in the second half, he scored in the 63rd minute to help secure the 3-0 vicory.

"For me it is a great honour, great happiness to reach Romario and to be among the top scorers of the Brazilian team," the PSG star told reporters after the match.

"I wanted to pay homage to him in some way because he is an idol. Like I said last week, I do not want to be better than anyone, just myself.

"So it was a way to pay tribute, because he is an idol, not just to me, but all Brazilians."

Neymar's ultimate target will be to catch fellow Santos icon Pele, who remains well ahead at the top of the list on 77 goals.

Brazil Football Confederation officials were furious with Brazil star Neymar as he refused to meet with fans when they landed back after World Cup exit. Brazil lost their World Cup dream in a memorable quarter-final tie on Friday.

When the squad landed back in Rio de Janeiro's international airport on Sunday there was still a crowd of hundreds there to greet their heroes.  According to Spanish sports daily AS, Neymar opted to leave Tom Jobin Airport via the backdoor to avoid meeting supporters.

This incident caused outrage inside the corridors of power at the CBF, with the report claiming that officials are disappointed with the 26-year-old over his behaviour.

Even the media did not bother to cut Neymar any slack after the disappointing exit with Brazilian website UOL claiming that Neymar ‘destroyed his own image in Russia’. Criticism of the forward’s behaviour have come from many corners and while he always had people behind him due to his extravagant skill and youth, the World Cup exit has turned many against the Brazil star.

Members of Brazil’s national team were applauded by fans greeting their arrival at Rio. Supporters chanted and cheered the players on as they got off the airplane and appeared in the airport lounge.

Casemiro and Philippe Coutinho stopped to greet some of the supporters and also took pictures with them.

Paris Saint-Germain coach Thomas Tuchel pledged to keep his conversations with Neymar behind closed doors on Sunday as he weighs up how best to deal with the combustible star.

Neymar, the world's most expensive player, was widely lampooned for his play-acting at the World Cup, but Tuchel refused to reveal if he would raise it with the Brazilian.

"I'm young -- well, not so young -- but I know when I speak about Neymar there's a lot of potential to every word that I say," said the 44-year-old German.

"So the best thing when I speak to him about something that we do this in closed rooms."

Tuchel said he needed a close relationship with Neymar, whose difficult World Cup ended when Brazil were stunned by Belgium in the quarter-finals.

"It's always a big challenge to bounce back and I will help him with that. (But) what I talk about with him, when I talk with him, it's a secret that I keep."

Brazil are looking for their sixth world title and according to former Selecao legend Ronaldo, the country's hopes lie with Neymar.

A World Cup winner with Brazil in 2002, Ronaldo has faith in Neymar, he said,  "We hope that he (Neymar) can be our top scorer and can bring the World Cup to Brazil.”

"We hope so. I hope so. And we are ready, I think Brazil has a very good team for that (winning the trophy)." he added.

During the last World Cup, the PSG superstar Neymar got injured which affected Brazil's World Cup hopes as they were handed a humiliating defeat by the mighty Germans -- one that still haunt the Brazil supporters. Surely the Brazilians are looking forward to the 26-year old to retaliate this time and bring the glory home.

"But football is great because you always have another opportunity to change history." he added.

Now Neymar is ready and the forward he has the ability to achieve what Ronaldo had in 2002. The 26-year-old comes into the World Cup having come back from a metatarsal injury. Ronaldo himself is not unfamiliar with injuries and he recalled how long it took for him to prepare for 2002 World Cup. In the end, he felt that because of all the adversitites, the victory attained greater meaning.

"For sure the 2002 World Cup in Korea and Japan was my favorite," he recalled. "We won. Not just because we won but before the World Cup I got a very difficult injury and a long time for recovering.

"And after all that, after two years recovery we won the World Cup and that is my favorite World Cup ever."

Neymar may not have the all-star supporting cast that Ronaldo enjoyed 16 years ago, but this current Brazil squad's strength lies in their coach Tite and his ability to get them playing as a team.

"People are so excited in Brazil waiting for another win. It's been a long time," he says with a smile.

"For us it's a long time, believe me." he concluded.

Brazil superstar Neymar brushed off his critics after firing the five-time World Cup winners to victory over Mexico on Monday and into a quarter-final showdown with Belgium.

Neymar scored one goal and created another as his increasingly impressive Brazil side overpowered the Mexicans 2-0 in sweltering conditions.

But Neymar's sparkling performance was tarnished by yet another example of his tendency to overreact to seemingly innocuous challenges.

The latest chapter in a bulging catalogue of histrionic behaviour came in the second half, when Mexico midfielder Miguel Layun appeared to step on his ankle as he lay prone.

Neymar writhed around and convulsed as if he had received an electric shock.

"We wasted a lot of time because of one single player ... we lost our style in the second half, because of the referee.

"This is a very bad example for the world and the world of football."