Journos can use motorbikes on election day 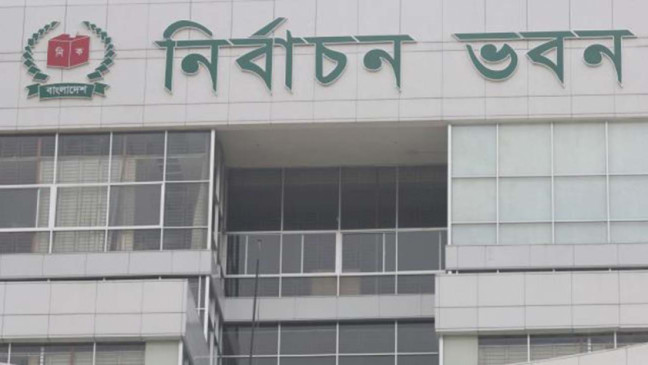 Election Commission today okayed the plying of motorcycles by journalists on election day December 30, provided that they display the approval sticker of the commission.

Asadul Haq, deputy director (public relations) of the commission, told The Daily Star that the previous ban is not valid for motorcycles with stickers provided by the EC.

The move comes a day after the Editors’ Council wrote to the commission to ensure mobility of journalists for election observation and media coverage.

However, the vehicles used to distribute newspapers do not need approval stickers for plying on the election day, the EC official said. Other vehicles with EC stickers can also ply that day.

“We are rejecting the election result as the opinion of the masses was not reflected in the polls. We strongly demand holding an immediate re-election under a non-partisan government,” said IAB Ameer Mufti Syed Muhammad Rezaul Karim.

Rezaul Karim raised the demand at a press conference held at the party's central office in the capital's Paltan area.

The Islami Andolon Bangladesh chief said they will launch a strong movement by creating national unity if the demand is not met.

The party might unite with Jatiya Oikyafront for a united movement to press home their demands, the IAB chief added.

Rezaul Karim said if the media was allowed to work freely on the polls day, they would have been able to gather information of vote rigging in thousands of polling stations.

“The nation did not experience such a farcical election in the last 47 years,” he added.

The Election Commission, police and the administration were also involved in the scheme to ensure victory of AL-led grand alliance across the country, he alleged.

The one and a half hours meeting that began at 10:00am was held at the US envoy's residence.

There was no briefing from either side about the meeting.

A BNP leader close to Fakhrul said the BNP delegation informed the US envoy about their party's observations over the election and various “irregularities”.

He said the BNP team also provided Miller with documents, including paper cuttings and video clips, on “election irregularities and vote fraud”.

The BNP and its alliance partners faced a serious debacle in Sunday's general election as they got only seven seats out of 298.

Noted citizens yesterday called upon the Election Commission to play a neutral and transparent role to make sure that the administration involved in the electoral process discharges its duties neutrally.

Casting doubt over the role of the EC and the government in holding credible polls, they said only spontaneous participation of people on the polls day can overcome uncertainty over the election.

The speakers were addressing a press conference arranged under the platform titled “Nagorikder Pokkhe Amra” at Dhaka Reporters Unity in the capital.

Reading out a written statement, Prof Gitiara Nasreen said various incidents ahead of the December 30 polls had created suspicion among people that the EC was biased towards the government instead of doing its constitutional duty.

On a number of occasions, the election commissioners did not discharge their duties independently and acted as if they were subordinate to the rulers, said Prof Nasreen, a teacher of the department of Mass Communication and Journalism at Dhaka University.

“In such a situation, it is normal that people will be doubtful about fair polls,” she added.

Placing a five-point demand that included ensuring EC's neutral role, she said space should be created for local and foreign observers and journalists so that they can perform their duties independently.

She urged the authorities concerned to ensure security of religious and ethnic minority groups along with the marginalised people during the election.

Noted economist Prof Anu Muhammad said the EC's role, which is necessary for holding a democratic election, is so far absent.

The EC severely lacked authority over the civil administration and the police. Besides, the roles of law enforcement agencies and administration over recent violence were also not sufficient for holding fair polls, he said.

“Amid this, people are the only hope,” he said, adding that the country can only overcome the present situation through their active participation in the election.

As the election will be held under a partisan government, it will be a challenge for them to hold it in a free and credible manner, he also said.

Criticising violation of the electoral code of conduct by the ministers and the lawmakers during electioneering, Supreme Court lawyer Dr Shahdeen Malik said they were doing so as they have no respect for the rule of law and any morality.

“Such an act is not possible without utter disrespect for the rule of law and morality,” he said.

The electoral code of conduct has been formulated to create level-playing field, said Dr Malik, a noted jurist of the country.

If the next government is not formed through a transparent process then the country's image will be tainted in the outer world while foreign investment will also be hampered, said eminent historian Prof Ahmed Kamal.

Criticising the restriction on journalists over covering the election, photographer Shahidul Alam said such a restriction was imposed as the government was scared.