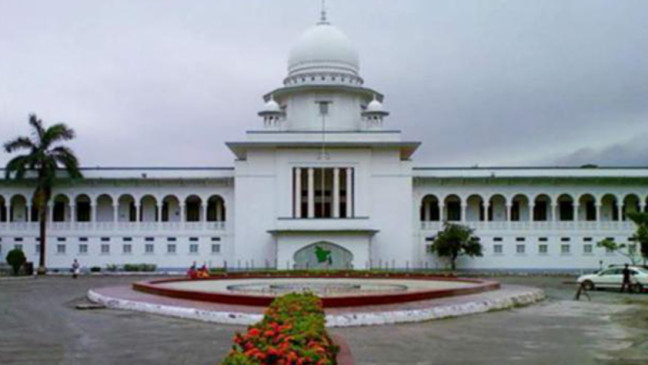 The High Court today directed the Election Commission to accept the nomination papers of six BNP candidates -- an upazila chairman and five municipal mayors -- so that they can contest the upcoming general election.

Earlier, both the EC and returning officers rejected their nomination papers respectively during appeal hearing and scrutiny as they did not resign from the post of upazila chairman and municipal mayor.

The EC cancelled his nomination as he did not mention his wealth statement in the nomination paper.

The same bench of the HC also directed the EC to accept the nomination paper of Gonojagoron Mancha spokesperson Imran H Sarker and to allow him to contest the 11th parliamentary polls.

The court stayed the Election Commission’s decision of cancelling his nomination paper after hearing a writ petition filed by Imran challenging the EC’s decision.

Imran’s lawyer Barrister Tania Amir said that the returning officer rejected Imran’s nomination paper on the ground that there was a mistake in the serial number of signatures of the voters in the nomination paper.

Imran has collected the signatures of more than one percent voters of the Kurigram-4 constituency, she said.

The 11th general election will be held on December 30.

As per the polls schedule, the deadline for filing the nomination papers was November 28.

The authorities have fixed December 2 for scrutiny and December 9 the last date for nomination withdrawal.

"It has been evident from the confessional statements given by other accused that he [Mohtesam] used to run a syndicate. His activities have tarnished the image of the government and country as he had given shelter to other accused and he was their consultant.

"He [Mohtesam] is a ringleader. He used to collect commissions from tenders floated by the offices of LGRD ministry. Why should we grant him bail in the case," the HC bench of Justice Md Nazrul Islam Talukder and Justice Kazi Md Ejarul Haque Akondo said during the hearing on a rule issued earlier following his bail petition.

The HC also rejected the bail petition, saying that Mohtesam cannot be granted bail because of the gravity of his offence mentioned in the case.

The bench passed the rejection order considering that the petition was not presented properly before it as his lawyer Syed Mizanur Rahman said at a stage of hearing that his client would not appeal for bail.

After being on the run for a year, Khandaker Mosharraf's brother held

Deputy Attorney General AKM Amin Uddin Manik represented the state during the hearing of the petition.

The Criminal Investigation Department (CID) of police filed the case with Kafrul Police Station in 2020 on charges of laundering Tk2,000 crore.

During the hearing of the same bail petition, the HC bench on May 17 this year refused to grant him bail, but issued a rule asking the state to explain why he should not be granted bail in this case.

The EC has been asked to register the two political parties in 30 days after receiving the copies of the HC verdicts.

Delivering verdicts on two separate writ petitions, the HC observed that the EC’s decisions to reject the applications for registering Ganasamhati Andolon and Insaniyat Biplob Bangladesh as the political parties were illegal and malafide, petitioners’ lawyers told The Daily Star.

Following the writ petitions, the HC earlier issued separate rules questioning the EC’s decisions to reject the parties’ applications for registration should not be declared illegal and why the commission should not be directed to register them as political party.

On April 8, 2018, the EC issued a notice to the party saying that its application was not prepared in line with the Representation of the People Order (RPO).

Saki later submitted another application that included necessary info and data in line with the RPO to the EC on April 22 last year.

However, the EC on June 19 last year again rejected the application saying that it was not prepared properly, he added.

Advocate Eunus Ali Akond said Insaniyat Biplob Bangladesh has properly fulfilled the provisions of representation of people order for registration, but the EC has illegally rejected the application for registration.

Former chief election commissioners KM Nurul Huda and ATM Shamsul Huda today said participation of all political parties is a must for an "acceptable" election.

They were speaking at a discussion organised by Election Commission where former CECs and election commissioners expressed their views over the upcoming parliamentary election, based on their experience.

They also discussed the next course of action ahead of the national election.

Former CEC Nurul Huda said, "I believe that participation of all parties is required in the elections.  I'll win, I must win – we have to shed this mentality."

He added: "There is no need to deploy army for the elections."

Former CEC Shamsul Huda said, "If all parties don't participate, election will not be acceptable. How to bring all the parties to the polls depends on your (EC) ability to convince them."

"A political party cannot stay out of elections for long in a democratic country. We have to create that environment," he said.

"Let there be a truly-elected government through fair elections in our country. Let's cancel use of muscle power," he added.

Another former CEC, Justice Abdur Rauf, said, "If you keep things as is and do not dare to make any change, then set up one polling station for every 500 people. This will reduce the voting hours and voting will end between 8am and 12pm. You can complete counting of votes in the day time. The worst thing is that the counting of votes starts in the evening. And then we 'see jinns and ghosts' and everything else."

Election Commission does not have any scope to express helpessness but they have an inherent power to take action against those who "dishonour" directives, said Shushashoner Jonno Nagorik (Shujan).

Replying to a question today, Shushashoner Jonno Nagorik (Shujan) Secretary Badiul Alam Majumdar said at a press conference that the EC has the inherent power to do anything which was not mentioned in the regulations to make an election fair and neutral.

Badiul made these remarks in reaction to the comment of Chief Election Commissioner Kazi Habibul Awal who said yesterday (June 12, 2022) that "the Election Commission cannot do anything against a lawmaker if he 'dishonours' the commission's directives".

The CEC issued a letter to the Cumilla's Awami League lawmaker AKM Bahauddin to leave his constituency ahead of the Cumilla City Corporation polls scheduled for June 15 as the lawmaker attended an election campaign violating the laws.

Badiul said, all are written in the code of conduct, which was issued in 2016 for the city corporation elections.

"If anyone violates the code of conduct, the EC has the power to take action against him. They can even cancel the candidacy of a candidate. The commission should have to implement the power," Badiul said.

"All the administration, government party and opposition party leaders will be under the election commission in the upcoming national election. If they decide not to follow the commission's directives, then what will happen?" he asked.

Shujan at the conference today published their analysis about the Cumilla city election candidates' income, educational background, and the cases filed against them.

The HC also ordered Samrat to surrender before the lower court concerned in seven days in connection with the case.

The bench of Justice Md Nazrul Islam Talukder and Justice Kazi Md Ejarul Haque Akondo passed the order following a petition filed by the Anti-Corruption Commission (ACC) on Monday (May 16), seeking cancellation of the bail granted to Samrat.

In the petition, the commission challenged the lower court order that granted bail to Samrat, one of the "casino kingpins" in Dhaka.

Casino ‘kingpin’ Samrat out on bail

Citing the petition, ACC's lawyer Khurshid Alam Khan told The Daily Star that the lower court concerned has granted bail to Samrat on medical grounds though he has been receiving treatment at Bangabandhu Sheikh Mujib Medical University (BSMMU).

Samrat cannot be granted bail because of the gravity of his offence, he said.

Samrat was released on bail on May 11 spending over two and a half years in jail in four cases after Judge Al Asad Md Asifuzzaman of Dhaka Special Judge Court-6 granted him bail to Samrat in the corruption case.