240 for AL aspirants, rest for partners 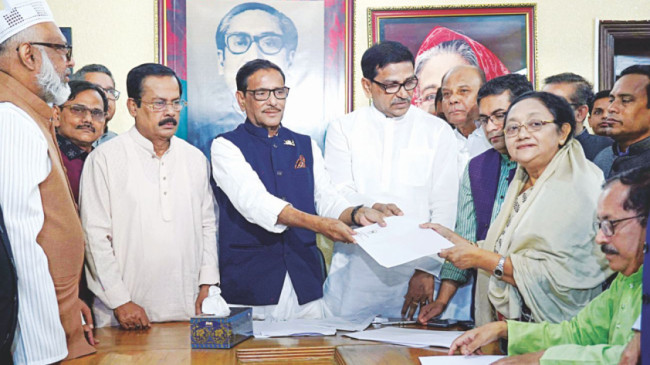 The ruling Awami League yesterday unveiled the list of its final candidates in 240 constituencies for the December 30 election with its chief Sheikh Hasina contesting the polls from only one seat for the first time in her political career.

Hasina will run only from Gopalganj-3, a constituency in her home district, leaving Rangpur-6 for Speaker Shirin Sharmin Chaudhury. The AL chief had filed nomination papers for the two constituencies.

In the parliamentary polls since 1986, Hasina had contested from more than one seat.

This time, no one in her party is contesting from more than one constituency.

The AL will leave 40 seats for the Jatiya Party, a key component of the AL-led grand electoral alliance, according to AL insiders.

The ruling party also finalised the list of 16 candidates from its six partners in the alliance for taking part in the election with the AL's electoral symbol “boat”.

It, however, has not left any seats for more than 100 parties, including 66 Islamic parties, which are also in the grand alliance.

The AL issued letters signed by Hasina to its candidates for submission to the returning officers (ROs) in their constituencies by tomorrow, the last day for finalising candidature.

The ROs will then allocate them the AL's electoral symbol "Boat" on December 10 for starting formal electioneering the same day.

An AL delegation will submit the list of its final candidates to the Election Commission today, AL General Secretary Obaidul Quader said at a press briefing at the party's Dhanmondi office.

"We have completed nominating our final candidates. Most of them got letters [from the party]," he said.

Those nominated contenders, who did not get letters, can collect those from party Joint General Secretary Jahangir Kabir Nanak.

The AL had primarily fielded 281 candidates in 264 constituencies. The nomination papers of three of them were rejected during scrutiny.

There were multiple AL aspirants in 17 constituencies.

Yesterday, the party picked final candidates in the seats, leaving out a number of sitting lawmakers.

It chose not to give nominations to as many as 46 incumbent MPs, and instead picked new faces in their constituencies.

Besides, it gave the party ticket to eight candidates who were elected in the 2014 election as independent candidates.

The AL also fielded candidates in eight constituencies where the incumbent lawmakers are from the JP, the Workers Party and the Bangladesh Nationalist Front.

Moreover, the party picked 20 women candidates and 18 leaders from minority communities for contesting the election.

The ruling party, however, left no seat for over 100 parties that joined the AL-led grand alliance, seeking to contest the polls under the alliance's banner. More than half of those are also in the JP-led 57-party electoral alliance.

For example, the AL did not leave any constituency for the Bangladesh National Alliance (BNA) led by former BNP minister Nazmul Huda. The BNA, a combine of 31 parties, joined the grand alliance about a year ago.

The AL left only three seats for the Bikolpodhara Bangladesh, which is leading an eight-party alliance.

About seat-sharing, Quader said, "Everyone expects more. We cannot give more than what we have given."

Candidature in two to four seats remains unresolved though it was supposed to be settled last night, mentioned the AL general secretary.

He also pointed out that his party would leave 40 to 42 seats for the JP.

The JP, which is leading the 57-party electoral alliance, has fielded 233 candidates for contesting the polls with its electoral symbol "plough".

The party, however, has not left any seat for its partners.

JP sources told this newspaper that there are seven constituencies where both the AL and the JP have fielded candidates. The JP is now asking the AL to leave the seats for its candidates.

"The names of the party candidates will be finalised in a day or two," he said at the party's Banani office.

He mentioned that his party will roll out its electoral manifesto in a couple of days.

Around two weeks ago when the AL primarily picked its candidates, it nominated around four dozen new faces to run for the election.

The selection came as a shock to many as more than 30 incumbent lawmakers, including AL joint general secretaries Nanak and Abdur Rahman, and organising secretaries AFM Bahauddin Nasim and BM Mozammel Haque, were left out apparently due to controversy and internal feuds.

Two senior party leaders -- ex-deputy speaker Col (retd) Shawkat Ali and former state minister Rahmat Ali -- are also not in the electoral race this time. Both of them are sitting lawmakers. Their sons looked to replace them in their constituencies in Gazipur and Shariatpur but to no avail.

Finance Minister AMA Muhith, who was elected from Sylhet-1 in the last two parliamentary elections, is not running this time, creating opportunity for his brother AK Abdul Momen to contest from the constituency.

Veteran Awami League leader and former health minister Mohammed Nasim was laid to rest at Dhaka's Banani graveyard this morning, after receiving a guard of honour.

The AL presidium member's first namaz-e-janaza was held around 9:40am at Sobhanbagh Jam-e-Mosque in Dhanmondi, where several hundred people, mostly from his constituency-- Sirajganj-1 -- took part.

Nasim was buried around 11:00am after his second namaz-e-janaza at Banani Jam-e-Mosque at 10:30am.

Several hundred leaders and activists of AL took part in the second janaza maintaining physical distance, amid the threat of coronavirus infection.

Nasim, son of Shaheed Captain M Mansur Ali, one of the organisers of the Liberation War of Bangladesh and a close associate of Father of the Nation Bangabandhu Sheikh Mujibur Rahman, passed away on June 13 at the Bangladesh Specialised Hospital in the capital at the age of 72.

At least four people were killed and 15 others injured this evening (May 2, 2022) in a clash between two Awami League factions in the Jhaudia union of Kushtia's Sadar upazila, over establishing dominance.

"For a long time, a local Awami League leader Fazlu Mondal was at odds with Keramat Ali Biswas -- Jhaudia Union Awami League's president and former chairman. Supporters of Keramat got into an argument with Fazlu's supporters in a local market today, ahead of iftar," the OC said.

"At one point, Keramat's supporters attacked Fazlu's supporters and both parties engaged in a fight armed with local weapons. Four people were killed on the spot during the half-hour-long brawl," added the OC said.

At least 15 people were injured and are admitted at Kushtia Sadar Hospital. According to hospital sources, eight of them are in critical condition.

Additional police have now been deployed in the area, the OC also said.

Former Awami League lawmaker AKMA Awal today alleged that Pirojpur district and sessions judge, who was stand-released yesterday, rejected his bail after being "influenced by a minister".

"Being influenced by Pirojpur-1 lawmaker and Fisheries and Livestock Minister SM Rezaul Karim, the judge illegally cancelled our bail prayers [including his wife's petition] though we had the legal right to get bail," he said.

Awal, also president of the district unit Awami League, was addressing a press conference at the party office this noon.

He also alleged that the Anti-Corruption Commission (ACC) filed three cases against him and his wife after being "influenced" by Rezaul Karim.

Yesterday, Pirojpur District and Sessions Judge Abdul Mannan was stand-released over corruption allegations and attached to the law ministry hours after he rejected bail petitions of Awal and his wife.

The court had also ordered the authorities concerned to send Awal and his wife Laila Parvin to jail.

After the order was passed, supporters of Awal started demonstrations on the court premises. Later, Awal and his wife got bail from another court in the district.

A local leader of Awami League was hacked to death in Kalia upazila of Narail last night.

The deceased, Kaium Shikder, was general secretary of Kalabaria union unit of AL and a member of the same union parishad, said Roksana Khatun, officer-in-charge of Naragati Police Station in Kalia upazila.

The OC said Kaium was attack by miscreants in Kalinagar-Boaliarchar area around 9:00pm when he along with Naragati thana unit Krishak League President Hasnat Mollah was returning to Kalabaria from Kalia upazila headquarters on a motorcycle.

Kaium died on the way to hospital. Hasnat was taken to Khulna Medical College Hospital, said the police official.

No case was filed or none arrested in this connection till this morning, our Bagerhat correspondent reports quoting the OC.

Ramesh Chandra Sen, a presidium member of ruling Awami League and lawmaker of Thakurgaon-1 constituency, has tested positive for coronavirus.

His sample was collected on Monday and the result came back last night, said Civil Surgeon Mahfuzur Rahman Sarker.

He is in a stable condition and is receiving treatment from his home, the civil surgeon added.

Nine others also tested positive yesterday in the area, taking the total number of infected in Thakurgaon to 437, reports our local correspondent.

Of them, eight patients died and 272 were released from hospitals after recovery.