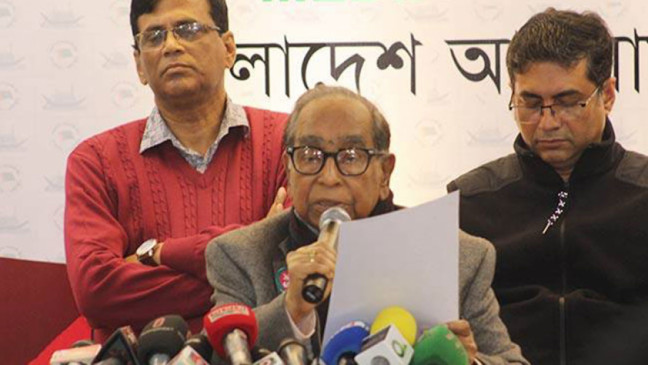 “Every moment we are getting information about attacks on our leaders, activists, and supporters by the BNP-Jamaat men. Hundreds of campaign offices have been vandalised,” he said at a press conference at the media centre of the AL central office.

Imam demanded that the Election Commission withdraw permission given to nine local election observer organisations. He said the organisations were set to send around 6,585 observers in 140 constituencies and most of the observers were activists of the BNP and Jamaat-e-Islami.

Talking to The Daily Star, Rezaul Karim Chowdhury, executive director, Coast Trust, said, “HT Imam is a gentle man. But he misunderstood us.

He also said BNP-Jamaat in 2008 and recently had complained against them “for favouring the AL”.

“As questions have been raised against us, we are considering not getting involved in election observation activities,” he added.

A delegation of ruling AL yesterday urged the EC to allow journalists to use motorcycles during the election so that they could cover the polls better.

After the meeting, they told reporters that they also urged the commission to stay alert about criminals cloning phone numbers of EC and admin officials to misdirect field-level officers.

The BNP and Jamaat men were attacking AL activists and police and were using black money in their campaigns, the delegation claimed. They said

“We're demanding immediate arrest of all BNP-Jamaat cadres involved in terror attacks and violence … bring them to book … ,” Akteruzzaman added.

Veteran Awami League leader and former health minister Mohammed Nasim was laid to rest at Dhaka's Banani graveyard this morning, after receiving a guard of honour.

The AL presidium member's first namaz-e-janaza was held around 9:40am at Sobhanbagh Jam-e-Mosque in Dhanmondi, where several hundred people, mostly from his constituency-- Sirajganj-1 -- took part.

Nasim was buried around 11:00am after his second namaz-e-janaza at Banani Jam-e-Mosque at 10:30am.

Several hundred leaders and activists of AL took part in the second janaza maintaining physical distance, amid the threat of coronavirus infection.

Nasim, son of Shaheed Captain M Mansur Ali, one of the organisers of the Liberation War of Bangladesh and a close associate of Father of the Nation Bangabandhu Sheikh Mujibur Rahman, passed away on June 13 at the Bangladesh Specialised Hospital in the capital at the age of 72.

A Pirojpur court today extended the bail of former Awami League lawmaker from Pirojpur AKMA Awal and his wife Laila Parvin, for a month in three cases filed by the Anti-Corruption Commission (ACC).

Judge of Special Judge Court Mohammad Mohiduzzaman passed the order, according to our Pirojpur correspondent.

The ex-MP of Pirojpur-1, also president of the district Awami League, was accused in all the three cases which were filed over the misappropriation of khas (government) land, while his wife was accused in one of the cases.

The then Pirojpur district and sessions Judge Abdul Mannan on March 3 had ordered the authorities concerned to send Awal and his wife to jail, rejecting their bail prayers in the cases.

Hours after sending Awal and his wife to jail, Judge Mannan was stand-released over corruption allegations and attached to the law ministry on approval from the Supreme Court on March 3.

Later, on the same day, Joint District and Sessions JudgeNahidNasrin, who had been given the responsibility of acting district and sessions judge of Pirojpur, granted them bail after they moved a review petition before her.

BNP leaders and activists are still getting obstructed, Khan, chairman of the party’s election management committee, said at a press conference.

The court has cancelled the candidacy of 16 BNP contestants after the election commission gave them validity, he said. The declaration came at the last moment.

“There was no time to give replacement candidates. The EC has conspired to gift those 16 constituencies to Awami League,” he alleged.

Prime Minister Sheikh Hasina today said the biggest achievement of Awami League through its sacrifices and endurance is the liberation of Bangladesh.

"The achievement that came through sacrifices and endurance of Awami League is the liberation of Bangladesh...Today, we have a country of our own, we have our dignity as a nation...This is the biggest achievement," she said in the parliament during an unscheduled discussion on the 71st founding anniversary of Awami League.

The PM, however, regretted that when Father of the Nation Bangabandhu Sheikh Mujibur Rahman was leading the war-torn country forward, "Mirjafar" (betrayer) group of Mushtaque and Zia (Ziaur Rahman) assassinated him brutally.

"As a result, the country's progress was blocked," Hasina added.

Hasina, also leader of the House, said since formation of the political party, the organisation has always served the humanity and people, it always speaks for the deprived and struggles to establish their rights.

The AL president said there was a time when frantic efforts were on to eradicate the name of Bangabandhu Sheikh Mujibur Rahman from history, but it was not possible.

The premier added: "Truth cannot be erased. Father of the Nation is not with us physically, but his existence remains in the hearts of Bengalis. We have to realise his dreams. We will ensure a hunger-free, poverty-free golden Bengal."