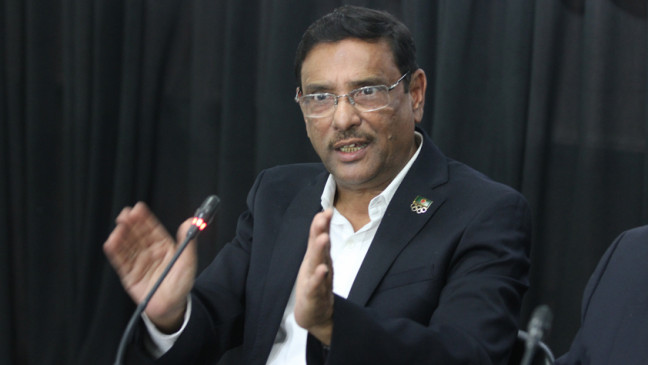 Quader made the remarks while talking to reporters after a meeting with Indian High Commissioner in Dhaka Harsh Vardhan Shringla at the secretariat.

Responding to a question about the size of the new cabinet, he said, “We have no idea at the moment. The prime minister will decide.”

In response to a question on how Awami League secured win in all the constituencies in Noakhali though it is a BNP stronghold, Quader said once there was organisational weakness of his party in the region and after he took charge as the general secretary of AL, the party successfully overcame the limitation.

As the recent BNP rallies drew huge crowds in different cities, the Awami League is now preparing to hold rallies and other programmes across the country from next month apparently to show its strength.

In November, the ruling party will hold councils in eight districts followed by rallies in the towns, said AL insiders.

Apart from this, the government is likely to open 100 new bridges to traffic in the first two weeks of November. Prime Minister Sheikh Hasina may remotely inaugurate three of those bridges in rural areas and address rallies there.

Currently, the party is holding councils at district, upazila and union levels. Rallies are also being held in those places.

The AL's youth front Jubo League on Saturday announced it will hold a grand rally at Suhrawardy Udyan in the capital on November 11 to mark its 50th anniversary.

The AL also plans to organise a rally at Suhrawardy Udyan in mid-December with a "gathering that will astonish all", sources said.

In the third week of December, the party's triennial national council will be held at the same venue to pick the next leadership.

"Through our national council, we will begin our election campaign, and the organisational activities will continue until the polls," AL presidium member Kazi Zafarullah told The Daily Star.

The specifics of the event and campaign will be decided by the AL Central Working Committee on November 28 at the Gono Bhaban.

About BNP's divisional rallies, AL Joint General Secretary Bahauddin Nasim said, "The BNP is trying to create a confrontational situation and the Awami League will not step into that trap. We will hold rallies across the country with participation of leaders, activists and supporters to show that the Awami League is still popular."

In recent weeks, the BNP held huge rallies in Chattogram, Mymensingh and Khulna and is scheduled to organise similar events in seven other cities to protest the power crisis, soaring prices of essentials and the killing of its leaders and activists.

Despite transport strikes and fear of attacks by AL activists, the rallies in Chattogram, Mymensingh and Khulna saw the presence of thousands of supporters.

The enthusiasm in BNP supporters has worried the AL a little, said insiders, adding that they believed the BNP rallies might have shown the general public BNP's popularity, which in itself is a sign of the ruling AL's weakness.

Besides, BNP leaders repeatedly said the country would be run under the leadership of Khaleda Zia after December 10 when they would hold a rally in the capital.

These remarks have already made the AL leaders uncomfortable, because they do not know the specific plans of the opposition party regarding the rally.

However, the government is now contemplating either not to give permission for the rally or to take measures to prevent the BNP from gathering the expected number of participants.

Addressing the council of Narayanganj AL, Obaidul Quader, AL general secretary, yesterday said they would face the BNP on the streets and the final face-off will take place in December.

AL presidium member Mofazzal Hossain Chowdhury Maya on Friday said the BNP would not be allowed to hold political programmes anywhere in the country in December.

The BNP high command has directed the party candidates of Sunday's polls to collect centre-wise results and information on “election anomalies” by today.

The party will compile all the data and submit them to the Election Commission soon, its Secretary General Mirza Fakhrul Islam Alamgir told The Daily Star yesterday.

On Monday night, the Jatiya Oikyafront leaders decided to submit a memorandum to the EC on December 3 compiling information on all “polls irregularities”.

A letter was sent to each of the candidates yesterday asking them to provide eight types of information, including on election anomalies, arrests and killings of BNP men, to the party, he said.

The ruling Awami League secured a landslide victory in Sunday's polls. The Oikyafront, led by the BNP and several other parties, rejected the result and demand a reelection.

Chief Election Commissioner KM Nurul Huda ruled out the demand saying there was no scope for holding any fresh election.

The BNP high command would prepare a summary report and brief foreign diplomats stationed in Dhaka following the compilation of data on the centre-wise results and alleged polls anomalies, said a party source.

The high command was observing the overall situation and the reaction of the international community over the election.

Asked about the party's next course of action, a senior leader said they would not do anything hurriedly.

“We will take some time as the party leaders and activists are devastated by government repression. We will certainly devise our next course of action once we turn around,” BNP Standing Committee member Moudud Ahmed said.

The BNP high-ups have already decided that MPs elected from the party would not take oath as they have rejected the results alleging various polls irregularities, including ballot-stuffing and driving away of their polling agents.

A senior leader from the Oikyafront wishing anonymity said the main challenge for the BNP was to keep the unity within the combine and the 20-party alliance intact.

The Oikyafront nominated candidates in 299 constituencies, only seven of them won.

Soon after the DMP gave permission to BNP to hold its December 10 rally at Suhrawardy Udyan, the party said it will stage the programme in front of the Nayapaltan office.

Earlier today, the DMP has given permission to the BNP to hold its December 10 rally at the capital's Suhrawardy Udyan on 26 conditions.