JP wants to be part of new govt 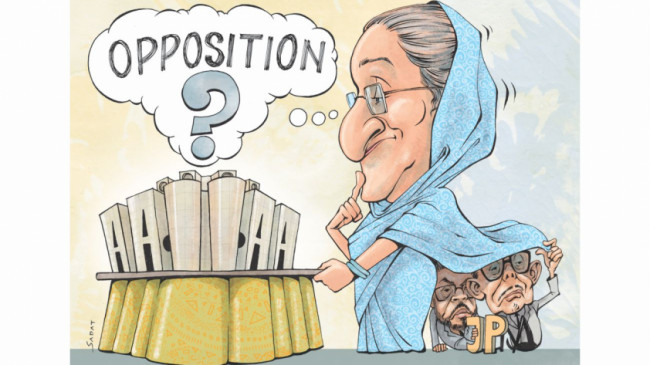 The Jatiya Party does not want to sit on the opposition bench in parliament.

Its MPs, in a parliamentary party meeting yesterday, unanimously decided to be a part of the Awami League-led new government.

“Since we participated in the election under the banner of the Awami League-led grand alliance, we want to join the government. Who will sit on the opposition bench is not our concern," JP Co-chairman GM Quader told journalists after the meeting at the Jatiya Sangsad Bhaban.

They sat for the meeting immediately after taking oath as members of the 11th parliament.

"We doubt if people will accept us as the opposition if we quit the grand alliance now to play the role of the opposition," Quader said, adding, "We don't want to sit on the opposition bench … This is a practical problem for us.”

During the election, the leaders and activists of the JP worked with AL men and they now want to work together with the ruling party for the country's development, he said.

"A delegation of the party [JP] will meet Awami League chief Sheikh Hasina to convey our decision to her. If she has any suggestions for us, we will discuss them in our party forum," Quader said.

At the meeting, he said, his party's lawmakers opined that they want to work with the leader of the grand alliance to take the country  forward.

The way people voted indicated that they did not want to see the opposition in parliament, Quader claimed.

After the meeting, JP Secretary General Mashiur Rahman Ranga told reporters that people were happy with the government and they did not want a major opposition in parliament.

"We want to stay with the new government. However, grand alliance chief Sheikh Hasina will make the final decision in this regard. We will abide by her decision," Ranga said.

Election in Gaibandha-3 was rescheduled for January 27 following the death of a candidate and re-polling will take place in three centres in Brahmanbaria-2 on January 9.

The Jatiya Oikyafront has announced that its MPs-elect will not take  oath as the alliance rejected the polls results alleging that the election was rigged by the ruling party.

Against this backdrop, it was assumed that the JP may sit on the opposition bench, like in the current parliament.

The JP became the main opposition in the current parliament formed after the 2014 election, which the BNP-led alliance had boycotted. The JP won 34 seats and its senior leader Raushan Ershad was recognised as the leader of the opposition with the status of a minister. Three JP MPs were also made ministers.

Meanwhile, JP Chairman HM Ershad could not take his oath as MP yesterday due to his illness, said GM Quader, Ershad's younger brother.

He was then scheduled to take the oath separately at 3:00pm yesterday. But later, he informed Quader that he was feeling ill and would not be able to do so.

A Pirojpur court today extended the bail of former Awami League lawmaker from Pirojpur AKMA Awal and his wife Laila Parvin, for a month in three cases filed by the Anti-Corruption Commission (ACC).

Judge of Special Judge Court Mohammad Mohiduzzaman passed the order, according to our Pirojpur correspondent.

The ex-MP of Pirojpur-1, also president of the district Awami League, was accused in all the three cases which were filed over the misappropriation of khas (government) land, while his wife was accused in one of the cases.

The then Pirojpur district and sessions Judge Abdul Mannan on March 3 had ordered the authorities concerned to send Awal and his wife to jail, rejecting their bail prayers in the cases.

Hours after sending Awal and his wife to jail, Judge Mannan was stand-released over corruption allegations and attached to the law ministry on approval from the Supreme Court on March 3.

Later, on the same day, Joint District and Sessions JudgeNahidNasrin, who had been given the responsibility of acting district and sessions judge of Pirojpur, granted them bail after they moved a review petition before her.

The trustee board was formed around 4:15pm today, SM Faisal Chisti, a presidium member of Jatiya Party, who was present during registration of the trustee board, told The Daily Star.

The 90-year-old former military ruler has left out his wife Raushan Ersahd, now deputy leader of opposition at parliament, and brother GM Quader, co-chairman of Jatiya Party, from the trustee board.

Due to his health condition, Ershad also didn't take part in his election campaign for the December 30 polls, even for a single day.

In the maiden session of the new parliament, Ershad joined only one sitting out of total 26.

Ershad in his 2018 wealth statement submitted to the Election Commission before December 30 national election mentioned that his yearly income was Tk 1.08 crore.

According to Ershad's wealth statements, his main sources of income are shares and salaries from various companies, unspecified businesses and honorariums, according to the statement.

Apart from these, Ershad's latest acquisitions are two flats in Gulshan and Banani, worth of Tk 6.2 crore and Tk 4.9 crore.

He took of Tk 56 lakh as loans from Union Bank Ltd of which he is a director and draws a yearly salary of Tk 74 lakh.

The Public Administration Ministry issued a gazette in this regard on Tuesday.

According to the gazette, the personal secretaries will hold their positions as long as the cabinet members hold their posts and they want them to continue.

Take a look at the list below to know the names of the new personal secretaries:

Ending weeklong series of drama and tension in the main opposition party in parliament, Jatiya Party senior co-chairman Raushan Ershad has been made Leader of the Opposition while its chairman GM Quader as deputy leader of the opposition.

As per the understanding between Raushan and Quader faction on Saturday night, the JP chairman on Sunday sent a letter to the Speaker requesting her to make him deputy opposition leader and Raushan, the opposition leader.

Earlier on Sunday, the Jatiya Party Parliamentary Party in its meeting formally selected Raushan as the Leader of the Opposition in Parliament.

The weeklong drama and tension in post-Ershad JP intensified on September 3, the day, GM Quader sent a letter to the Speaker, requesting her to make him the Leader of the Opposition.

He claimed that 15 JP lawmakers backed him for the post. The JP has 25 lawmakers.

The following day, Raushan, also deputy leader of the opposition, sent another letter to the Speaker, urging her not to accept Quader’s request.

On September 5, Raushan was declared JP chairperson as the rift between her and GM Quader over the party leadership and post of Leader of the Opposition in the Jatiya Sangsad deepens.

Flanked by a section of JP leaders and MPs, senior presidium member Anisul Islam Mahmud, also a lawmaker, made the announcement at a press conference in Raushan’s Gulshan residence.

Raushan, who was present there, said JP leaders were worried about the party. “They also fear that the party is going to split up like it did in the past. But I want to run the party together, with all.”

The announcement exposes the turmoil in JP sans HM Ershad, who died on July 14 after prolonged bouts of illness.

Hours after the Raushan faction’s press conference, Quader held a briefing at the party’s Banani office and said action would be taken against those who declared Raushan the JP chief.

He said that according to the party charter, he is still the chairman.

Four days later, Raushan in a statement said Quader could not be declared the chairman without any decision made at party forums. She said she did not accept Quader as the chairman.

On September 7, the two feuding factions of Jatiya Party patched things up and decided that party Chairman GM Quader would remain in his post and Raushan Ershad would become the Leader of the Opposition in parliament.

Representatives of the two factions met at a city hotel to reach an understanding.

Meanwhile, Quader yesterday at a press conference at his Banani office said there is no division in JP at present as the JP leaders and activists are working united to strengthen the party to go to power.