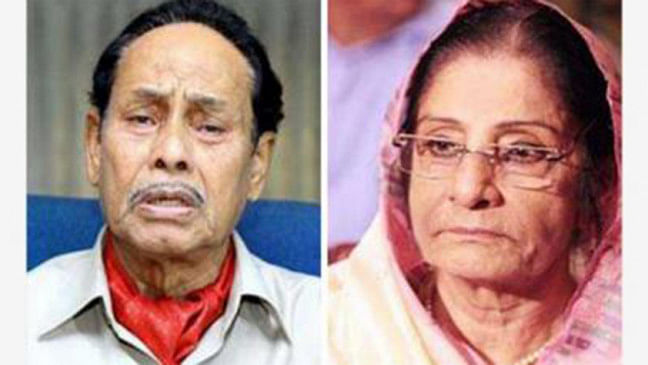 Jatiya Party chairman HM Ershad and leader of the opposition of the 10th parliament Raushan Ershad were not present at the swearing-in ceremony of the new cabinet members at Bangabhaban today.

Jatiya Party Co-chairman GM Quader, who has been appointed deputy opposition leader in the 11th parliament, also did not attend the programme citing that he did not get the invitation card.

GM Quader said Ershad could not join the function at Bangabhaban as he is sick. “But I don't know why madam (Raushan) didn't go to the programme,” he added.

In a statement on January 4, Ershad announced that his party will be the main opposition in the 11th parliament while he will act as the Leader of the Opposition.

Jatiya Party which joined the election as the key partner of the Grand Alliance bagged 22 seats in the December 30 elections.

Awami League President Sheikh Hasina is heading towards a fresh start forming her third consecutive government with 31 new faces of the 47-member cabinet.

The new cabinet will be comprised of 24 ministers, 19 state ministers and 3 deputy ministers.

Cabinet Secretary Mohammad Shafiul Alam announced the names of the lawmakers to be picked in the new cabinet.

The new members of cabinet members will take oath at the Bangabhaban around 3.30pm on Monday, he said at a press conference at the secretariat this afternoon.

THOSE WHO ARE GOING TO BE IN THE CABINET

-- Not out of danger considering age, health issues

-- Condition not suitable for shifting abroad

-- Urges not to spread rumour

-- Opened eyes when AL leader Quader, he visited him

“His lungs Infections have eased but the kidney is in serious condition. His overall condition remains unchanged,” GM Quader told The Daily Star.

Asked whether he will be put on life support, GM Quader said Ershad is not in such a bad condition for which he needs life support.

Ershad, now 89, was given oxygen support as his health condition deteriorated again on Sunday.

Yesterday evening, Quader, also the party acting chairman, said his brother was given oxygen support due to respiratory problem as his lung infection worsened.

On June 27, Ershad was admitted to Combined Military Hospital (CMH) in Dhaka. He was being treated there for several infections.

Over the last nine months, the former military ruler has been suffering from various health-related issues.

Awami League President Sheikh Hasina has chosen only her party colleagues in the new cabinet breaking the tradition of forming government with likeminded political parties.

Following a landslide victory in the national elections held last Sunday, the AL is going to form the government for the third consecutive terms with Sheikh Hasina assuming the office for the fourth term, a record touched by none in the country’s history.

In her new cabinet, Hasina has not picked any lawmakers from her alliance partners.

The Awami League formed the government for the first time under Hasina's leadership in 1996. In that cabinet, Jatiya Party leader Anwar Hossain Manju and JSD leader ASM Abdur Rob were made ministers.

In 2008, when the AL secured absolute majority, the Jatiya Party leaders including GM Quader were given place in the cabinet in addition with Bangladesher Samyabadi Dal General Secretary Dilip Barua.

In the end of the ninth parliament, JSD Chief Hasanul Haq Inu was also included in the cabinet.

In 2014, Sheikh Hasina formed the government for the second consecutive term and she made Workers' Party President Rashed Khan Menon minister along with Inu. Apart from this, 14-party grand alliance partner Jatiya Party leaders were also made ministers and state ministers in the 10th parliament.

However, this is for the first time ever when Sheikh Hasina is going to form the government with her party colleagues only.

Cabinet Secretary Mohammad Shafiul Alam announced the names of the lawmakers to be inducted in the new cabinet. The new cabinet will be comprised of 24 ministers, 19 state ministers and 3 deputy ministers.

There have been changes in 18 ministries out of 25. Three ministers of the immediate past cabinet including Information Minister Hasanul Haq Inu, Social Welfare Minister Rashed Khan Menon and Water Resources Minister Anwar Hossain Manju were dropped.

As HM Ershad-led Jatiya Party lawmakers will play the role of opposition in the parliament, they will also not be in the cabinet.

A few tests have been run on HM Ershad and his treatment is going accordingly, GM Quader said expressing his satisfaction over Ershad’s treatment at Combined Military Hospital (CMH).

The JP chairman was admitted to the CMH on June 27 with old age complications.

Since formation of the current parliament following the December 30 national election, Ershad, who is the leader of the opposition as president of Jatiya Party, could attend the maiden session only once due to illness.

The five-time MP flew to Singapore’s National University Hospital for medical treatment on January 20 and returned to the country on February 4. Since then he had been visiting the CMH regularly for health check-ups, said Shunil.

He was last seen at a public gathering in May when he attended an iftar mahfil arranged by his brother GM Quader at The Westin in Dhaka.

"Infections in his lungs have eased but infections in kidneys have increased. His overall condition remains unchanged," he said.

Asked whether he will be put on life support, GM Quader said Ershad is not in such a bad condition for which he needs life support.

Ershad was given oxygen support as his health condition deteriorated again on Sunday.