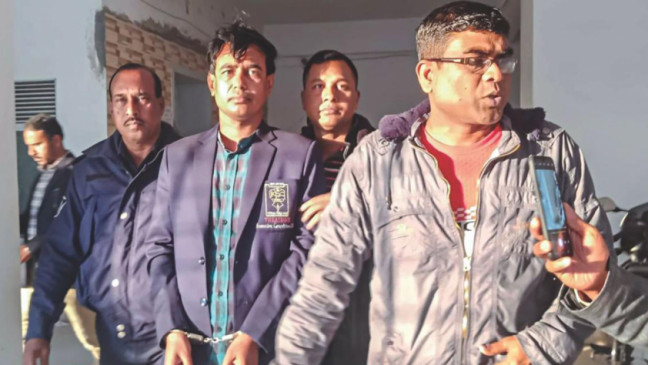 A Khulna court yesterday placed Hedayet Hossain Mollah, local correspondent of the Dhaka Tribune, on a three-day remand in a case filed under the Digital Security Act.

“I prayed for my client's bail as he is a cardiac patient. But the court put him on remand,” Hedayet's lawyer Tarik Mahamud told The Daily Star.

Hedayet, also the city editor of local daily “Probaha” and the immediate-past treasurer of Khulna Press Club, was arrested on Tuesday noon in the case filed for publishing “false” information on the number of votes cast in a constituency in the district during Sunday's polls.

The case statement said the accused published false, fabricated and provocative information on the voting with the use of electronic devices, including laptops, which might confuse people and create chaos.

Such activities made the “fair election” questionable, the statement said.

According to the initial announcement of the election results, the number of votes cast in Khulna-1 was higher than the total number of voters in the constituency.

As the matter was brought to the returning officer's attention, he said it was a mistake and later came up with a correction, said local journalists.

By the time the correction could be made, the two media outlets ran reports saying the number of votes cast was around 22,000 higher than the actual number of voters, they said.

Documents provided by the returning officer's office showed 45,000 of the 2,59,420 voters did not cast their ballots.

Meanwhile, Ain o Salish Kendra (ASK) in a statement yesterday demanded the immediate release of the arrested journalist and expressed concern over the “use of the Digital Security Act”.

The statement said the law would squeeze the scope for independent journalism and urged the authorities to withdraw the case.

Mohammad Shah Alam, secretary of Khulna Union of Journalists told The Daily Star that they would follow the legal procedures to deal with the matter. They would also hold a human chain in front of the Returning Officer's office in the district to “ensure justice for the two journalists”, he added.

The Supreme Court yesterday upheld a High Court order that stayed the investigation of the case filed under the Information and Communication Technology (ICT) Act against renowned photographer Shahidul Alam.

The apex court also asked the HC bench, led by Justice Moyeenul Islam Chowdhury, to hear and dispose of the HC rule by December 18.

A four-member bench of the SC's Appellate Division, led by Chief Justice Syed Mahmud Hossain, passed the order after hearing a leave-to-appeal petition filed by the state challenging the HC order.

Earlier on March 14, a HC bench stayed the investigation into the case.

The HC bench also issued a rule asking the government why the continuation of probing into the case should not be declared illegal and contradictory to the Digital Security Act-2018 in the constitution.

On March 3, Shahidul filed a writ petition challenging the legality of the case in which he was imprisoned for 107 days.

On August 5 last year, Shahidul, also founder of Drik Gallery and Pathshala South Asian Media Institute, was picked up from his Dhanmondi home during a widespread demonstration for safe roads.

Police lodged the case against the 63-year-old under Section 57 of the ICT Act and produced him before a Dhaka court the following day.

On November 15 last year, the HC granted bail to Shahidul and he was released from Dhaka jail on November 20.

Rapid Action Battalion (Rab-10) today claimed to have detained a man on charge of spreading rumours on social media.

Two mobile phone sets and a SIM card were also recovered from his possession, the Rab official said.

His intention was to create anarchy in the state by spreading false information, Ashraful said.

A case was filed against him under the Digital Security Act with Sutrapur Police Station in this regard.

Foreign Minister AK Abdul Momen has said there might have been excesses while enforcing the Digital Security Act, "but the government is now very careful to make sure the law is not abused".

"You cannot put up anything that incites violence. Some individuals put false stories. But, there may be some excesses. There are concerns and we agree," Momen said.

He was speaking at a panel discussion organised by the Washington-based Centre for Strategic and International Studies yesterday (April 6, 2022), marking the 50 years of the US-Bangladesh diplomatic relationship.

"Our law ministry has taken a strong position so that there will not be any excess," the foreign minister said.

USAID Deputy Administrator for Policy and Programming Isobel Coleman was a co-panellist at the discussion.

Momen is now visiting the US where he held bilateral meetings with his US counterpart Antony Blinken, USAID Administrator Samantha Power, attended a reception at the Bangladesh Embassy and joined discussions organised by the Washington-based think tanks.

At the discussion, he said people in Bangladesh have been freely using social media, but sometimes they spread hatred and incite violence. That was the basis why the government framed the DSA so that one cannot spread hatred or attack other groups.

He claimed that the media in Bangladesh is free and that there are 34 independent private television channels and 555 dailies and a few thousand online media outlets and Youtube channels.

Momen also said Bangladesh has a thriving civil society. "In Bangladesh, there are so many NGOs that none is found anywhere in the world. However, there are surely scopes for taking corrective actions, if there are any issues."

USAID Deputy Administrator for Policy and Programming Isobel Coleman said civil society space for democracy is a critically important issue and USAID has shared the concerns over it.

She said underpinning strong partnership and commitment to democracy, the USAID has increased its programme in democracy portfolio to ensure freedom of media and civil society.

The private companies also have to have social compliance policies and so are very sensitive about these issues, she added.

"We want to make sure that Bangladesh remains on a strong trajectory," Coleman said, appreciating Bangladesh's progress over the last 50 years and saying that USAID is proud to be a partner in Bangladesh's development journey.

In simple terms, democracy means the rule of the people. If there is a massive disparity with regards to ownership and power structure, and if class, gender, ethnic and religious discrimination dominate social relations, then the idea of the rule of the people cannot be realised. The struggle to achieve that goal is the essence of democracy.

However, the primary condition of democracy is that it should at least operate on the basis of the consent of the people – consent that is expressed through elections. Let us look at where Bangladesh is at in this regard, after 50 years of existence. The movement for democracy in Bangladesh has been going on for decades. Under Pakistani rule, the Liberation War was a result of this desire for democracy. Even after the war, the struggle continued. The fight against martial law in the late 70s and 80s was also a fight to establish democracy. In the 90s and even now, this fight has endured.

It is a matter of great misfortune, as well as of disappointment and uncertainty, that democracy in Bangladesh is practically absent now. A system of governance must depend on the people to remain accountable, transparent, and responsible. Even if the process of being accountable to the people is erroneous, it should be corrected through people's participation and elections. There is effectively no such thing in Bangladesh right now. If we look at any number of institutions, be that the administration, law enforcing agencies, universities or the judiciary, they are all suffering from a lack of transparency and public scrutiny. Corruption has become the rule of the day. All the commissions, including the Human Rights Commission and the Election Commission, have made themselves ornamental.

Public universities have now also become an extension of party rule. We have seen government appointed vice-chancellors (VCs) of different universities being accused of corruption, irregular appointments of teachers, destroying the educational environment by patronising criminals, and nurturing ruling party student organisations as hired goons to suppress dissenting voices. As a result, universities, places that are supposed to be centres of free thinking, that are supposed to harbour democratic sentiments, are now unable to establish themselves as proper institutions.

Even in society, because of the absence of democratic processes, all sorts of crimes – murder, rape, grabbing of land, waterbodies and forests, corruption – are going unchecked. It's as if anyone has a free pass as long as they are connected with the powers that be. When criminals get patronage from higher up the chain, the judiciary too becomes non-effective. On the other hand, any sort of outcry or protest against misrule and corruption is being met with force, and activists are being attacked by the police as well as ruling party goons. They are also being harassed with the use of the Digital Security Act. Enforced disappearances, torture in custody and false cases have become instruments to run the show unopposed.

Starting from the centre and going all the way to remote areas, we see a tendency of zero accountability. Corruption, robbery, defaulting on bank loans, bad deals with high commissions by powerful people, price hikes, rape and sexual harassment, grabbing properties of the poor and the marginalised people, money laundering – all of these are allowed to happen because of the absence of a democratic process.

The absence of the democratic process is also allowing the government to undertake megaprojects such as the ones in Rampal, Matarbari, Banshkhali and Rooppur, which are tremendously harmful to Bangladesh not only from an environmental standpoint but also from a financial one. From the very beginning, these projects have suffered from gross irregularities, and a lack of accountability and transparency. The consent and the participation of the people should have been the principal requirement before large projects such as these are undertaken. People should have been informed about the risks and potential issues. None of these things were done, and any voices that were raised on this issue were quickly stifled. A culture of fear was created to implement mega projects to give profits to certain local and foreign groups at the cost of the people and the environment.

Column by Mahfuz Anam: No govt has ever fallen for being self-critical

If even a shred of democracy existed, the level of opposition that Rampal received from the public and the experts would have seen the project scrapped. If a shred of democracy existed, the universities would not have been in this condition where knowledge is held hostage to partisan politics. If the democratic process existed even in the slightest, the justice system would have a minimal basis to stand on. If the democratic process existed, we would have seen the people's representatives contribute in some meaningful way to society.

The condition of the youth in our country, the plight of women, and the fact that people of different ethnicities and religious identities are now even more at risk – that they are being dispossessed of their lands and attacked at a greater frequency – all comes down to the absence of a democratic process.

This is why, for people of all ethnicities, religions, classes, and ages, the struggle for a democratic process, in a personal and collective sense, has turned into a struggle for existence.

Transcribed and translated by Azmin Azran.

Anu Muhammad is a professor of economics at Jahangirnagar University.

A court in Barishal today granted bail to poet and journalist Henry Sawpon in a case filed under the Digital Security Act.

Barishal Chief Metropolitan Magistrate Shamim Ahmed granted the bail after hearing a petition filed by him.

Police arrested Sawpon from his residence in the city on Tuesday for hurting religious sentiments.

The father of a catholic church in the city filed the case over Sawpon's Facebook post about Sri Lanka bombings.