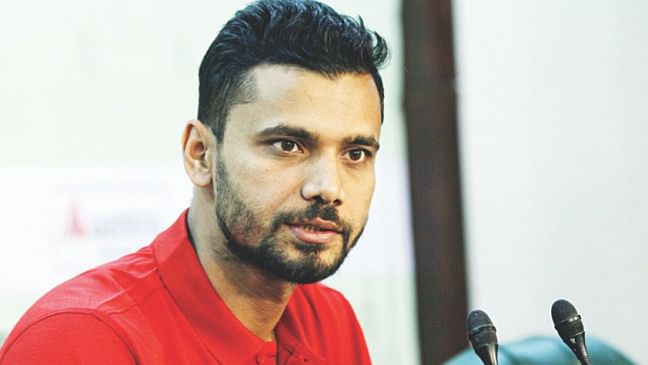 Bangladesh captain Mashrafe Bin Mortaza admitted to being confused during their 136-run thrashing at the hands of Afghanistan in Abu Dhabi on Thursday in their last Asia Cup Group B match. After the match he said was caught between trying to preserve energy for Friday's Super Four match against India and trying to win against Afghanistan.

What added to the confusion was that Bangladesh were without three of their first-choice players for the match. Talismanic opener Tamim Iqbal had gone home after sustaining a fracture to his left hand during the tournament opener against Sri Lanka on September 15. Mushfiqur Rahim, who is nursing a rib injury, was rested so that he could be fresh for Friday's crucial encounter. Ace pacer Mustafizur Rahman was also given a break. In their places, two debutants – opener Nazmul Hossain Shanto and pacer Abu Hider – and a player returning to the ODI fold after three years in Mominul Haque took the field.

"As far as confusion goes, it stemmed from the fact that we would have to play today and tomorrow. But that is not an excuse you can give after losing," Mashrafe said after Bangladesh were bundled out for 119 in chase of Afghanistan's 255 for seven. "And the second thing is it's very hard to overcome Tamim's absence. And the state Mushfiqur is in it was a must to give him a rest. We also rested Mustafizur. But still, the position we were in we could have played better. We played bad cricket after the 40th over."

Bangladesh had held Afghanistan to 163 for seven after 40.5 overs before leg-spinner Rashid Khan showed his all-round credentials with an unbeaten 32-ball 57 in an unbroken eighth-wicket partnership of 95 with Gulbadin Naib.

It was a slow wicket, and while Mashrafe was smart to bowl eight bowlers – five of them spinners – to keep the specialists fresh for the next day, he erred in bowling the pacers in the last 10, giving Rashid the pace to work with to launch his strikes. Mashrafe himself had a rare off day, conceding 67 runs from eight overs, including 18 to Rashid in the last over.

"Maybe I could have [bowled spin in the last 10]. But as I said I was very confused at that stage, thinking about tomorrow's match and who to bowl. [Mehedi Hasan] Miraz had two overs left so I could have used him," Mashrafe said. "At the same time, I was thinking of Rubel, at another time I was thinking of [bowling] myself. A lot of these things were swirling around in my mind as I was trying to ensure that undue pressure does not fall upon the bowlers lest it cause problems tomorrow. These things confused me. Yes, maybe I could have used Miraz, but as I said, confusion played a part."

Part of the confusion and frustration may have come from the fact that the organisers, Asian Cricket Council, made a last minute change to the Super Four fixtures on Wednesday morning, determining the group champions and runners up before they were decided on the field. It is widely believed that it was to accommodate financial powerhouses India, who demanded to play all their matches in Dubai before the tournament.

However, while that was disheartening, it did not change the fact that Bangladesh had to play two matches in two days, which was the case in the original schedule. It was the same case for Afghanistan, and they would have been disheartened to. But they showed far more clarity of thought than their higher-ranked opponents on Thursday.