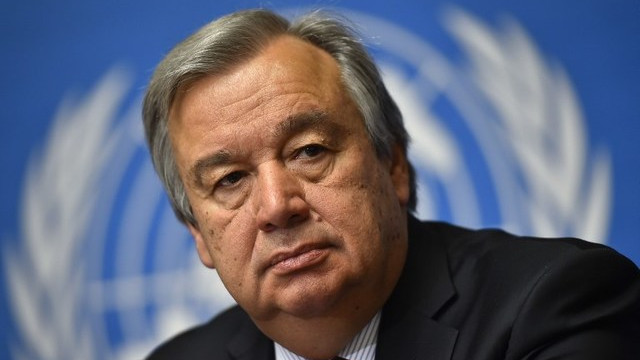 UN Secretary-General António Guterres has called on all stakeholders to ensure an environment free of violence, intimidation and coercion before, during and after Sunday's general election in Bangladesh.

In the run-up to the polls, he said an environment free from violence would help enable a peaceful, credible and inclusive election.

In a statement yesterday, Stephane Dujarric, the spokesman for UN secretary-general, said, “All Bangladeshi citizens, including minorities and women, must feel safe and confident in exercising their right to vote. Civil society and electoral observers should be fully supported to play their role in the process.”

Ahead of the upcoming elections in Bangladesh, @antonioguterres calls for an environment free of violence, intimidation and coercion. All Bangladeshis, including minorities & women, must feel safe and confident in exercising their right to vote. full text: https://t.co/bMQIDBtozh

Guterres also reiterates the continued commitment of the United Nations to support a peaceful and democratic Bangladesh, it added.

The call for a peaceful and free, fair and inclusive election comes at a time when violence continues across the country before the 11th parliamentary election.

Last week, the UN said it is closely following the situation ahead of the polls in Bangladesh.

On December 10, Dujarric said, “We believe, as a matter of principles, that elections should be held in a positive climate, free from any sort of intimidation.”

In another development, the US yesterday expressed concern by the high level of campaign violence over the last two weeks.

Talking to reporters after a meeting with Chief Election Commissioner KM Nurul Huda at the Election Commission Secretariat, US Ambassador Earl Miller said he asked for this meeting because the US is concerned by the high level of campaign violence over the last two weeks, says an embassy statement.

All parties have been victims of violence, including minorities and female candidates. However, it appears opposition party candidates have borne the brunt of most violence, he said.

Miller added, “I appreciated the opportunity to consult with the Election Commission to see what plans it has to create a conducive atmosphere, so all Bangladeshis, no matter their political affiliation, feel safe to go to the polls on Sunday and cast their votes for the candidates of their choice.

“Bangladesh is rightfully proud of its democratic traditions, including elections where upwards of 70 percent of the electorate turns out to vote. In any democratic election there must be space for peaceful expression and assembly; for independent media to do its job covering electoral developments; for participants to have access to information; and for all individuals to be able to partake in the electoral process without harassment, intimidation, or violence.”

The US wishes all Bangladeshis a free, fair, tolerant and peaceful election day on Sunday, the envoy added.

“Army is deployed as per the demands of BNP and Jatiya Oikyafront. Now they are trying to make the army questionable,” 14-party alliance leader Dilip Barua told reporters after handing over a letter to the EC secretary Helal Uddin Ahmed.

Dilip Barua led a delegation that protested attack on Awami League activists and sought EC's steps on stopping the conspiracy of BNP and Oikyafront.

“They [BNP and Jatiya Oikyafront] are trying to make December 30 election dubious by raising one after another false allegations” Dilip also said.

Main opposition BNP today claimed that over 9,200 of its activists were arrested since the declaration of election schedule on November 8.

“Our activists were sued in 806 ghost cases since then,” Ruhul Kabir Rizvi, senior joint secretary of the party, said at a press conference at Nayapaltan.

He claimed, 12,588 activists of BNP and its alliance Jatiya Oikyafront were injured in 2,716 incidents of attacks throughout the country in the last 22 days.

So far, eight opposition activists have been killed in election violence, he added.

“The government is applying all its power to oust BNP and Jatiya Oikyafront from the election,” Rizvi claimed. “Our activists are targeted from rally footages.”

Director General (DG) of Rapid Action Battalion (Rab) Benazir Ahmed revealed it at a press conference regarding the elite force's preparation for the 11th parliamentary election at its media center in Dhaka's Karwan Bazar today.

If anyone becomes confused about any news, he/she will have to share it on the Facebook page and the Rab team will instantly reply it after verifying the truth, said the Rab DG.

Rab officials will work round the clock, he added.

He also said the Facebook page will remain open to counter all lies, rumours and false news centering the election slated for December 30.

A total of 10,000 Rab members have been deployed across the country ahead of the election, said the Rab DG.

"If anyone dares to carry out violence in any place, we will obstruct them and the force is ready to resist them," he added.

Two army helicopters will remain standby on the election day, he said adding, "A special force will be kept standby for travelling to any part of the country if needed."

Benazir also requested all to inform them any kind of violent incidents so that they can take instant action.

The communities or countries providing safe refuge to people fleeing war or persecution shouldn't be alone and unsupported, the UN Secretary-General Antonio Guterres said on the occasion of World Refugee Day.

"We stand together or we fail," Guterres said in a video message adding "On World Refugee Day I ask you to remember them."

He also urged the citizens of the world to remember those who were displaced as a result of conflict or persecution.

"As long as there are wars and persecution, there will be refugees" Guterres said.

He also expressed his concern over the refugees, "not receiving the protection they need and to which they are entitled".

For everyone to do more to help the refugees, whose number has mounted to 68 million at present, solidarity and unity are key, Guterres reflected.

He also announced in his message that a Global Compact on refugees will be presented to the UN General Assembly this year which "offers a way forward and recognizes the contributions" of refugees to the society hosting them.

Meanwhile, the UN chief along with the high commissioner of the UN refugee agency (UNHCR), the president of International Committee for Red Cross (ICRC) and World Bank Group President will visit Rohingya refugee camps in Bangladesh on June 30.