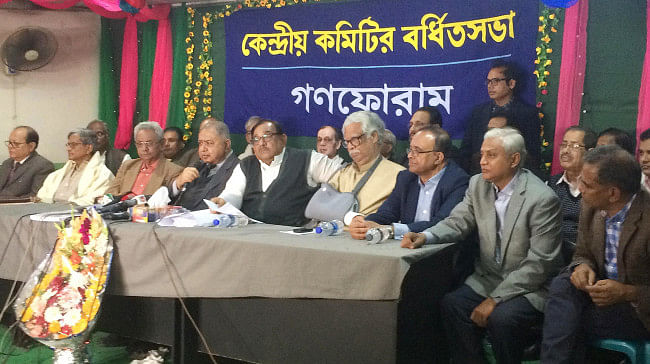 "We've rejected the election, but the way our two candidates came out successful in such an election through competition is their big achievement. So, we're thinking positively about sending them to parliament," said the Gonoforum chief.

He was addressing a press briefing at Bangladesh Shishu Kalyan Parishad after an extended meeting of the party.

Later, Gonoforum leader Sultan Mohammad Munsur, who was elected from Moulvibazar-2, told this correspondent that he and his party colleague Mukabbir Khan, elected from Sylhet-2, will take oath as lawmakers of 11th parliament.

Gonoforum is a key component of the Jatiya Oikyafront, which earlier had termed the parliamentary polls a farce and demanded the Election Commission immediately hold a fresh election under a nonpartisan interim government.

“We reject this so-called result. At the same time, we demand fresh polls under a nonpartisan government,” Dr Kamal, also convener of the Oikyafront, told the press hours after the polling was over at 4:00pm on December 30.

The BNP, another major component of the Oikyafront, said the next day that its leaders elected in the 11th parliamentary polls will not take oath as they have already rejected the results.

The party took the decision at a meeting of its standing committee alleging various irregularities and violations, including ballot stuffing and ouster of opposition polling agents, from voting centres.

“I am in Noakhali and I am not aware of any such decision. That's why I don't want to make any comment on this,” Fakhrul told this correspondent.

Another Oikyafront leader Mahmudur Rahman Manna, who is also coordinator of Nagorik Oikya, told The Daily Star that the alliance leaders will sit at 11:00am today to decide whether its MPs-elect will take oath.

This is the first time any Gonoforum leader won in the national election since formation of the party in 1999.

At yesterday's briefing, Dr Kamal said the two leaders of the party can play a positive and meaningful role in parliament after taking oath.

“If others think it won't be possible for them to play a good role in parliament, they may take a decision in line with that thinking.”

In reply to a query, Dr Kamal said he thinks it will not create any problem with the BNP if the two MPs-elect take oath.

“I think the Jatiya Oikyafront will remain intact to create pressure on the government,” he said.

“We've formed the Oikyafront so that we can realise our demand for a free and fair election. We believe that if Oikyafront functions effectively, we'll be able to mount pressure on the government over the election and force it to discharge its duties obeying laws.”

The Gonoforum chief said that in principle, the party is in favour of keeping the unity and will take a positive decision in this regard after discussions.

He added that the Oikyafront has kept its movement on and it may be intensified further in the days to come.

Replying to a question, he said they may move the court over the election if they get the evidence of serious Electoral fraud.

In the December 30 polls, 280 candidates of Oikyafront and BNP-led 20-party alliance ran with BNP's electoral symbol “sheaf of paddy”.

The Oikyafront managed to win only seven seats and two of those were bagged by Gonoforum candidates.

The election in Gaibandha-3 constituency was rescheduled for January 27 following the death of a candidate, and re-polling will take place in three centres in Brahmanbaria-2 on January 9.

Gonoforum leader Mukabbir Khan had initially quit the race as he was denied nomination from the Oikyafront.

It then called back Mukabbir to contest in the election as BNP candidate. He contested the polls with Gonoforum's electoral symbol “rising sun”.

Munsur won from Moulvibazar-2 with BNP's symbol “sheaf of paddy”.

On October 13, BNP and three other political parties formally launched an alliance called Jatiya Oikyafront, around two months before the national election.

The alliance unveiled an 11-point goal and promised to bring sweeping reforms in governance system if voted to power.

Rob and Kader could not be reached for comments.

At yesterday's briefing, Gonoforum General Secretary Mostafa Mohsin Montu in a written statement described the way the December 30 election was manipulated and rigged.

So, he said, those declared winner by the Election Commission were not actually “elected”.

Terming hike of the gas price illogical, Gonoforum today called upon the government to immediately repeal the decision of hiking gas tariff for the greater interest of people.

“The gas tariff hike will put extra burden to the people and thus the government should repeal it,” Reza Kibria, general secretary of the party, said this in a press statement this afternoon.

He said that the way the price of gas has been hiked is completely illogical.

The fare in public transport will increase and industrial production rate will also soar following the government’s move for increasing the price of gas, he said.

By raising the gas price, the government has proven that it is not running the state preserving the interest of the people.

The energy regulator yesterday raised tariff for all users, saying the move would help the government bear the expenses of importing liquefied natural gas.

With this, gas tariff for households has more than doubled in the last decade. Gas price was last hiked in June 2017.

"I would like to thank Dr Kamal Hossain for realising their political mistake," Minister Hasan said while talking to reporters at the Secretariat.

Oikyafront Convener Dr Kamal yesterday said it was a mistake on the part of his party Gonoforum to have joined the December 30 polls with Jamaat leaders contesting under the alliance banner.

Taking Jamaat men along to polls a mistake

Hasan Mahmud further said that the JOF will make another mistake if their elected candidates do not take the oath to join the 11th Parliament.

"I hope they will realise it and join the parliament by taking the oath of office," said the minister.

"A party is trying to drag the country backwards. I think no conspiracy against the country will work," he said.

Responding to a question about the recently enacted Digital Security Act, he said that the government will work on it so that no panic remains among the journalists about the act.

"I always welcome all types of criticism. When I was the Environment Minister, English daily The Daily Star published several reports criticising the ministry, even they published cartoons. But, we gave them an environment award. Bangladesh Paribesh Andolon (BAPA) was also awarded although they had criticised the ministry," said the minister.

Mentioning that criticism speeds up anyone's journey, the minister said, "But, blind and one-sided criticism is not useful. Prime Minister Sheikh Hasina has introduced the culture of welcoming any criticism."

"This time, Awami League has pledged that the country's villages will be turned into cities. Coordinated efforts are required to move the country forward. Mass media also play a vital role in this effort," said Hasan Mahmud.

He also said that a huge revolution has been made not only in the country's online media but also in print, electronic and social media.

"Around 8 crore people are using social media," he mentioned.

Gonoforum's another MP-elect Mokabbir Khan (Sylhet-2) is going to be sworn in tomorrow, following the footstep of party MP Sultan Mohammad Mansur.

In response to a letter sent by Mokabbir to Speaker Dr Shirin Sharmin Chaudhury today, an arrangement has been made to administrate oath to him at 12:00pm on Tuesday at the Jatiya Sangsad Bhaban.

In the letter sent in a letterhead of Gono Forum, the MP-elect said, "Me and my party has decided to take oath either on April 2 or 3."

Talking to UNB, Mokabbir said he sent the letter as per the decision of their party's presidium members. "The party leaders and its president Dr Kamal Hossain are aware of it."

Replying to a question, he also said Dr Kamal gave him the green signal to take oath. "Besides, the people of my constituency also requested me to be sworn in."

On March 7, Sultan Mohammad Mansur (Moulvibazar-2) took oath as a member of the 11th Parliament.

Earlier on March 3, two Gonoforum MPs-elect sent separate letters to the Speaker requesting her to arrange their oath-taking ceremony on historic March 7.

However, Mokabbir Khan did not take oath on that day.

BNP along with Gonoforum and some other parties joined the December-30 election in alliance under the banner of Jatiya Oikyafront. BNP bagged six seats while Gonoforum two in the election.

The alliance turned down the election results bringing the allegation of 'massive vote robbery' and decided not to join parliament.

Gonoforum expelled Sultan Mansur hours after he had joined parliament.

“There is still time for those MPs who did not to take oath yet,” Dr Shirin said after paying homage to the martyrs of the Liberation War by placing wreaths at the National Memorial in Savar.

Shirin Sharmin was elected as speaker of the parliament for the third consecutive term during the first session of the 11th parliament yesterday.

"As the speaker, I want to make the Jatiya Sangsad functional by giving equal opportunity to all treasury bench, opposition and independent lawmakers,” she said.

A total of eight leaders of the Jatiya Oikyafront including six of its key component BNP were elected in the December 30 national election but did not take oath as lawmakers of the parliament yet.

The Oikyafront and the BNP rejected the election result bringing the allegation of vote rigging and ballot stuffing and demanded a fresh election under a nonpartisan caretaker government.

All contenders of the Jatiya Oikyafront in the 11th parliamentary polls will submit memorandum to the Election Commission on January 3 demanding re-election under a nonpartisan administration immediately.

Jatiya Oikyafront Convener Dr Kamal Hossain made the announcement after a meeting of top brass of the opposition alliance this evening.

“And, they will announce the next course of programme to press home their demand,” Kamal also Gono Forum president said.

The contenders from other opposition parties will also submit their memoranda to the EC office in Agargaon area of Dhaka on the Day, Kamal also said.

The photo shows that Jatiya Oikyafront top leaders attend a meeting at the chamber of alliance convener Dr Kamal Hossain in Dhaka on Monday, December 31, 2018. Photo:Collected

“A drama in the name of national election was staged yesterday and the countrymen perceived from their hearts that how the election process of a sovereign and independent country was destroyed,” Kamal said.

Apart from the countrymen, the people across the globe have also saw the role of the prime minister (Sheikh Hasina) and her loyal chief election commissioner (Nurul Huda) in the election, Kamal said.

“Though the ruling Awami League sees its victory in the election it has failed the 17 crore people. A grave of our desired democracy was dug through their (AL) victory,” he said.

Earlier, the Oikyafront leaders held a meeting to decide their next strategy as the combine, which includes major opposition BNP, experienced an unprecedented defeat in the 11th parliamentary election yesterday.

The top brass of the alliance held the meeting at Dr Kamal Hossain's chamber in Purana Paltan area of Dhaka, Latiful Bari Hamim, a staff of the Oikyafront's media wing, told The Daily Star.

Oikyafront and BNP-led 20-Party Alliance bagged only seven seats and others three seats while the Awami League-led grand alliance won 288 seats in the 11th parliamentary elections.

Also, the election saw opposition candidates boycotting elections in at least 43 constituencies; 42 of who were JatiyaOikyafront runners.