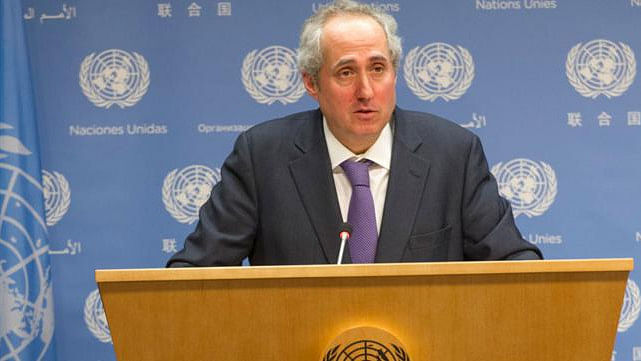 The United Nations has said it is closely following the situation   ahead of the upcoming general election in Bangladesh scheduled for December 30.

“We are following the situation closely and it is very important as a matter of principle that anywhere there are elections, that they be conducted freely and fairly and that the space be given for people to express themselves,” said Stéphane Dujarric, spokesman for the UN secretary-general.

He made the comment on Thursday during the daily press briefing at UN headquarters in New York while responding to a question on free, fair and credible polls in Bangladesh in the context of crackdown on opposition candidates and supporters ahead of the polls.

“We believe, as a matter of principles, that elections should be held in a positive climate, free from any sort of intimidation.”

Foreign Minister Dr AK Abdul Momen has sought strong partnership with the United Nations as he feared that Covid-19 may impede the progresses in the area of SDG achievements and the country's graduation trajectory from LDC status.

He emphasised the need to have a coordinated partnership with the UN so that the ongoing endeavours of Bangladesh government for the country's development remain on track.

The foreign minister also stressed close collaboration and strong partnership between Bangladesh and the UN to manage the Covid-19 impact.

He discussed the issues during his meeting with a five-member UN team led by Mia Seppo, UN Resident Coordinator in Bangladesh, at the State Guest House Jamuna on Wednesday.

During the meeting, Dr Momen highlighted the impressive economic growth of Bangladesh including spectacular progress in the areas of poverty reduction, improvement in life expectancy, reduction of maternal and child mortality, women empowerment and other socio-economic sectors.

He also informed that despite the onslaught of Covid-19, Bangladesh successfully submitted its second Voluntary National Response of SDG implementation on time.

The foreign minister, however, said he feared negative impact of the pandemic on RMG and expatriate employment -- two of the mainstays of the country's economy.

He also expressed concern about the returnee migrant workers and sought UN's assistance for re-skilling, re-employment and re-integration.

Dr Momen expressed hope that considering the large population size, Bangladesh would receive a substantial allocation from the UN's response and recovery fund.

The minister highlighted the climate vulnerability of Bangladesh and reminded about the responsibility of the developed countries in mitigation of climate change impact in light of the Paris Agreement.

"Bangladesh as the current chair of the Climate Vulnerable Forum will work with all concerned to ensure climate justice," Dr Momen said.

He also sought support from the UN bodies for the establishment of the global climate adaptation centre as well as an innovation and knowledge centre to promote South-South Cooperation.

The world has a lot to learn from Bangladesh on climate adaptation, he added.

While Dr Momen thanked the UN agencies for their continued support on the Rohingya issue, he expressed deep concern that there was no progress in repatriation of Rohingyas to Myanmar.

The ongoing violence and continued military offensive and resultant instability in the Rakhine province are forcing Myanmar nationals to flee and take perilous journeys by the land and sea in search for safety and security, said the Ministry of Foreign Affairs today.

This has broader ramifications on the overall repatriation as Myanmar is failing to create conditions conducive for safe and sustainable return of the Rohingyas, it said.

In this regard, the foreign minister yesterday called upon the UN to work with Myanmar more constructively under the framework of the existing tripartite mechanism.

The UN team thanked the foreign minister for highlighting issues of importance to Bangladesh and providing guidance on how the UN agencies in Bangladesh can effectively partner with Bangladesh in its journey towards economic prosperity.

The UN team mentioned that since Bangladesh joined the UN in 1974, the UN agencies are constructively engaged with Bangladesh in its pursuit of socio-economic development.

Mia Seppo, the UN resident coordinator in Bangladesh, assured of the organisation's full support for the country to recover from the socio-economic shocks of the pandemic.

The UN team also reiterated the organisation's commitment to remain involved with the issue of Rohingya repatriation through engaging more constructively with Myanmar.

The world's population is expected to reach eight billion on Nov 15, the UN forecast on Monday (July 11) in a report that said India will surpass China as the most populous country on earth in 2023.

That overall population milestone "is a reminder of our shared responsibility to care for our planet and a moment to reflect on where we still fall short of our commitments to one another," Secretary General Antonio Guterres said, without citing specifics.

"This is an occasion to celebrate our diversity, recognise our common humanity, and marvel at advancements in health that have extended lifespans and dramatically reduced maternal and child mortality rates," he added.

The forecast by the UN Department of Economic and Social Affairs said the world's population is growing at its slowest pace since 1950.

While a net drop in birth rates is observed in several developing countries, more than half of the rise forecast in the world's population in the coming decades will be concentrated in eight countries, the report said.

It said they are the Democratic Republic of Congo, Egypt, Ethiopia, India, Nigeria, Pakistan, the Philippines and Tanzania.

With the Election Commission not being able to give the number of press passes it has issued for today's election, there are allegations that many ruling party men managed the cards.

On the other hand, journalists of some mainstream media houses in Cumilla and Lalmonirhat alleged that they did not receive their press passes. Cumilla correspondents of television channels Maasranga and Ntv did not get those either, they claimed.

EC secretariat and returning officers in every districts issue cards to media personnel before election and, by using the cards, journalists can enter the polling centers to collect information.

While visiting the EC secretariat around 4:00pm yesterday, a correspondent of The Daily Star found many people were still waiting there to get their “press pass” and “vehicle stickers”.

Regarding the number of cards the EC issued yesterday, SM Asaduzzaman, director (public relations) of the commission said, “It is not possible to give the number now. It could be told tomorrow [today].”

Wishing anonymity, a number of Bangladesh Chhatra League (BCL) activists of Dhaka University told this newspaper that they had gotten blank press passes for the polls day.

“I have received around 200 press passes from a senior leader [of my organisation] who instructed me to fill the card with names of activists of different associate bodies of the ruling party.

I filled them up and, in the organisation category [of the card], I put names of different media houses at my will.”

Our correspondents from several districts also said they have heard such allegations. They said local ruling party men and even relatives of local top leaders allegedly obtained press cards using the names of so-called newspapers.

Meanwhile, several journalists from Cumilla said they did not get their pass cards until 8:00pm yesterday.

Masud Alam, local correspondent of Dhaka Tribune and Bangla Tribune, said, “Although, I am an active journalist, I did not get a press card but many post holders of local political parties obtained them.”

Imtiaz Ahmed, editor of local newspaper Ajker Cumilla, also did not get a pass.

“I am still trying to get a press card,” Imtiaz, also the local correspondent of Banglanews24.com, told our Cumilla Correspondent around 8:00pm yesterday.

In Lalmonirhat, local correspondents of Alokito Bangladesh, Naya Diganta, Sangram, and Jagonews were not given press cards until 8:30pm, reports our district correspondent.

Asked about the allegations, Asaduzzaman said the EC has already issued directives for press cards and, after proper verification, the cards were issued.

However, there are journalists who are also involved with politics and such allegations may arise in such cases, he added.

The female peacekeepers of Bangladesh Police have been given the responsibility to ensure security at Congo's Monusco Airport run by the United Nations (UN) Peacekeeping Mission.

The peacekeepers, members of BANFPU-1 (Rotation 14), are very proud to have the responsibility as it is a UN-run important facility, says a press release sent by Sohel Rana, assistant inspector general of Police Headquarters.

Merina Akter, commander of the rotation, said "We are carrying out duties not only in our country but also in foreign lands with dignity and pride under the flag of the United Nations."

Terming the task of ensuring security at the airport a big challenge, she wished to be successful this time as well.

"We are working tirelessly to maintain peace in Congo in line with the UN mandate," the press release quoted Merina as saying.

On September 11, a contingent of female police unit of Bangladesh left Dhaka for Congo to join the UN peacekeeping mission.