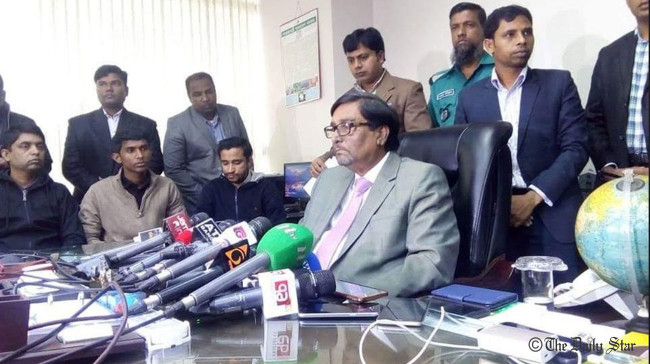 A day after CEC KM Nurul Huda's comment that his colleague Mahbub Talukdar did not speak the truth about level playing field, Mahbub yesterday hit back, and said the CEC "struck at the core of the existence” of an election commissioner by making such remarks.

"Earlier, the chief election commissioner made some negative comments about me in public. I never protested his comments. But I can't help protesting after his remark that I have lied by saying there is no level playing field," he said in a written statement.

"I strongly protest the [CEC's] statement," he said. "On December 17, I told reporters that they will get an answer as to whether there is a level playing field for the polls if they ask the question to their conscience.

"I'm still telling everyone concerned that you consider the situation yourselves and ask yourselves whether a level playing field exists or not."

Mahbub, however, did not take any question from reporters.

The next day, the CEC told reporters in Rangamati, "He [Mahbub] did not speak the truth. The overall election atmosphere is good."

The face-off between the two comes amid civil society's concerns about the absence of level playing field and continued attacks on the opposition camps in different parts of the country.

The BNP and other opposition parties have long alleged that a congenial polls environment is totally absent, although the ruling Awami League insists that is not the case and that the election field is very much level.

On the ground, however, at least 13 BNP and Jatiya Oikyafront candidates and 900 of their supporters have been injured in attacks allegedly by ruling party men since December 10, the day the campaign began.

AL men allegedly attacked campaigns and motorcades of at least 28 BNP and Oikyafront candidates. Police detained around 255 BNP men during the time, according to media reports.

Following days of violence, the authorities deployed 1,016 platoons of Border Guard members across the country on Tuesday (one platoon has 20-30 members).

The BNP also alleges that its leaders and activists are being harassed and arrested throughout the country even during the campaign.

At least 15 opposition candidates, arrested before and after the campaign began, remain behind bars although election is just 10 days away, according to BNP sources.

On Tuesday, eminent citizens alleged that the EC was not performing its duty in line with the constitution, and that it created scope for tainting the election.

At a seminar organised by the Centre for Governance Studies (CGS), they pointed at the EC's inadequate steps to deal with pre-election violence and said this could lead to a questionable election and post-election crisis.

The latest discord in the EC has raised concerns among experts, who stressed resolving the differences immediately.

There might be differences of opinion between them, but that has to be resolved in the commission meeting, he said.

Instead of doing so, they are speaking against each other publicly which is not a good sign, he noted.

"As a result, people will get confused and the electoral activities may be hampered. This division should be resolved as soon as possible," he said.

Former election commissioner Brig Gen (retd) M Sakhawat Hussain said the election was taking place in such a situation that it was difficult to create a level playing field for all political parties.

"But it is the responsibility of the Election Commission to reduce the gap. However, it is not that much visible that the commission has taken any steps to create level playing field," he said.

"The Election Commission is formed with five members. The commission makes decisions on the basis of majority's opinion. So the chief election commissioner has said the right thing,” he told a programme at Kabirhat in his Noakhali constituency.

In another development, the CEC yesterday instructed polls officials to announce accurate results.

"We are overwhelmed by the interest people have shown about the elections. So we have to be cautious …. Announce results correctly and convey it to the authorised person. A minor flaw in results may lead to a major anarchy. So you have to be very cautious,” he told EC officials involved in the result management system.

He also called on election officials not to let down the people since they put trust in the commission.

The ruling party leader and contesting for Noakhali-5 constituency said this during an electioneering programme at Bashurhat HSC Govt High School ground in Companiganj upazila this noon.

“Sheikh Hasina is being praised by the entire world today. The mass public support generated in favour of ‘boat’ symbol from Sunamganj to the Sundarbans and from Tentulia to Kutubdia, it is apparent that the Grand Alliance, led by Sheikh Hasina, will defeat the evil, communal forces and win the December 30 polls with a two-third majority,” Quader said.

Expressing concern that the “evil, communal forces” may launch attacks at the polling centres, he said they would have to be resisted from the beginning of voting till the end of vote counting on the polls day.

“Oikyafront will try different tricks and instigations to thwart the polls. Beware of their trap and work on for the next three days for holding the election with patience,” Quader called upon the leaders and activists of his party.

Mentioning that Sheikh Hasina has given respect to the women, he said “Women have risen in support of Awami League. Youths have raised their voice in digital Bangladesh.”

“Women and youth will be the driving force for the victory of Awami League,” Quader added.

Election Commissioner Mahbub Talukder has termed the prevailing electoral atmosphere as an ominous sign for the democracy and underscored the need for reform to the overall electoral process.

“Reform to the electoral process is needed for holding a meaningful election and continuation of the democracy,” Mahbub made the observation in a written statement centering the second phase of the upazila parishad election held amid a low turnout of voters.

“But it is not the Election Commission’s job to reform the electoral process, rather it is the matter of political decision,” the election commissioner said.

Claiming that the government devises plan on how to hold the local body election, Mahbub said, “I hope all political parties would participate in the election in future if it is held in a free, fair and credible manner and equal opportunities are created for all.”

The people will not have to lament if the electoral process is reformed and the responsibility is vested upon the Election Commission, he said. “The matter is needed to be considered.”

Mahbul also described this year’s upazila parishad election as an exceptional one as most of the political parties did not participate in the election.

“And due to this, the upazila parishad election has lost its glory,” he said adding that voters disinterested to go to the polling centres for holding the uniliteral election.

He said there is an apprehension that such inertia of people to the election process might turn into aversion to the democracy. “It is an ominous sign for the democracy.”

Claiming that the trend of elected unopposed has been introduced this time, Mahbub said, “In my option, election means competition among many people. If it is not held that way, how is it called election?”

“Can we call the people, who were elected unopposed, selected or elected?” the Election Commissioner said.

“The trend to be elected as people’s representatives unopposed is not good news for the democracy,” Mahbub expressed his concern.

Election Commissioner Mahbub Talukder again walked out of an election preparatory meeting of the commission placning a note of dissent this afternoon.

He left the meeting room around ten minutes after start of the meeting chaired by the Chief Election Commission KM Nurul Huda at Nirbachan Bhaban. Later, Mahbub Talukder explained before the media why he boycotted the meeting.

“I wanted to present some proposals during the meeting to make the next general election free, fair, impartial and acceptable to all, but I was not allowed,” Talukdar told reporters at his Election Commission office.

Mahbub said he boycotted the meeting for disagreement on various issues and not being allowed to give his opinion.

“Election Commission Secretariat through an unofficial note (UO) on October 8, asked me to present my proposals during today’s meeting but I was denied the permission. I felt humiliated,” he said.

Claiming that the freedom of speech and expression is fundamental right guaranteed by the constitution, Talukdar said, “The Election Commission cannot curb the rights in any way.”

“Under this circumstance, I boycotted the meeting, submitting the note of dissent in protest against such decision of the Election Commission,” the EC said.

On August 30 last, he boycotted another meeting of the Commission issuing a 'note of dissent'.

In his first proposal, Talukdar said the commission will have to take decision on how to deploy army in the next general election evaluating performance of the army in the previous ones.

In the third proposal, he said neutrality in the election depends upon the level playing field. To ensure inaction of the lawmakers during the polls does not depend upon the commission solely.  And thus, the government assistance is needed in this regard.

In the last proposal, the election commissioner said the government is the major stakeholder of the Election Commission in the national election and some issues depend upon the government wills. And thus, talks with the government over the issues are needed, he added.