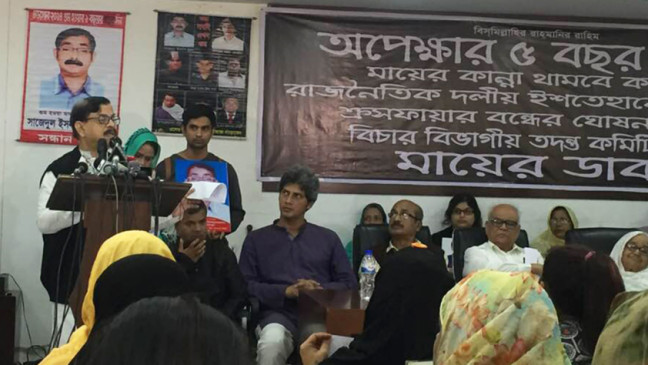 Manna said this while talking at a programme arranged by the family members of the victims of forced disappearance at the Jatiya Press Club this morning.

Addressing the issue of forced disappearance, he alleged that the current government is devouring people like a monster which could only be stopped by voting against it as the government is not paying any heed to public demands.

Election Commission has revised polls schedule, deferring the 11th general election by a week to December 30 – a decision taken on November 12.

The authorities have fixed November 28 as the deadline for filing nomination papers, December 2 for scrutiny and December 9 last date of withdrawal.

Chief Election Commissioner has said that there is a congenial atmosphere in the country – echoing the words of the ruling party.

However, major opposition alliances like the Jatiya Oikyafront, which includes BNP, and the Bikalpa Dhara-led Juktafront have sought for delaying the schedule.

Until thus far, it seems that the coming parliamentary election will not be the “non-participatory election” that was its predecessor.

All the major political parties are gearing up to contest in the election and there has been no threats of a boycott or withdrawal unlike the last time.

BNP Chairperson Khaleda Zia yesterday said she would not say anything about Sunday's national election.

She said this when reporters asked her about the election after a hearing of the Niko graft case at a makeshift court inside the Old Dhaka Central Jail.

As she was being taken back to her cell in a wheelchair, she said, “My legs ache too much.”

During the hearing, she told the court, “I won't come to the court if it sits at a place like this. The court can't run here. Our people can't come here. Give me sentence if you want….I won't come to this court.”

Judge Sheikh Hafizur Rahman of the Special Judge Court-9 of Dhaka said, “Start the charge hearing afresh as I am new in this case. I will hear everyone's speech.”

After that, Public Prosecutor of the Anti-Corruption Commission Mosharraf Hossain Kajol read out the charges against Khaleda and 10 others.

BNP standing committee member Barrister Moudud Ahmed, an accused in the case, told the court, “We are yet to get the documents stating the allegations against us although we have applied for them before. We need to read those documents to be able to fight the legal battle.”

He also said the setting of the court was not appropriate for holding a trial as there was no proper seating arrangement for lawyer and others.

Prosecutor Mosharraf Hossain Kajol argued that the defense was trying to delay the charge framing by saying those things.

The court fixed January 13 for the next hearing.

The judge also kept a petition in the case file submitted by Attorney General Mahbubey Alam on November 22 last year seeking permission to produce an FBI agent and two Canadian police as witnesses before the court to testify.

On December 9, 2007, the ACC filed the case with Tejgaon Police Station accusing Khaleda and 10 others of abusing power to award a gas exploration and extraction deal to Canadian company Niko.

While attending a discussion at Jatiya Press Club, he urged everyone to team up to resist fraudulence during the elections.

He also called up all to grow unity to fight against corruption.

The newly elected parliament members will be sworn in tomorrow and the new cabinet may take oath on Sunday.

A number of ministers informed this to journalists yesterday.

Talking to reporters during a dialogue with Bangladesh Secretariat Reporters Forum, Information Minister Hasanul Haq Inu said the newly elected MPs would be sworn in tomorrow.

The government would formally announce the date, he said at the media centre of his secretariat office.

The gazette on the MPs-elect was published yesterday.

The minister also said the Jatiya Party would be the main opposition in parliament. “The party can also take part in the new government if the prime minister offers them and they accept it.”

Inu said the Awami League-led Grand Alliance is the people's alliance and it has won the national election by a huge margin as it has tried to work for the people.

About the rejection of polls results by the BNP, Inu said the party did so as “part of its conspiracy”.

Seeking anonymity, a senior AL minister told The Daily Star that the new cabinet would be sworn in on Sunday.

However, AL General Secretary Obaidul Qauder yesterday said the process to form the new government was likely to be completed by January 10.

Quader, also the road transport and bridges minister, was talking to reporters after placing wreaths at the portrait of Bangabandhu in front of Bangabandhu Memorial Museum in the city's Dhanmondi.

“After the oath-taking of the new MPs, Prime Minister Sheikh Hasina will meet the president. The president will then request the prime minister to form the government.”

Asked about the Jatiya Oikyafront's decision not to take oath, Quader said, “The Election Commission will deal with the issue. Everything will be done according to the constitution. If any candidate fails to take oath, the Election Commission will take necessary steps in line with the constitution. A new schedule will be announced for holding a by-election in that constituency.”

The minister said he still believed the Oikyafront, led by the BNP, would not “disobey the people's verdict”.

“Earlier, they had made a mistake by boycotting the 2014 general election. Whether they are satisfied or dissatisfied [with the polls results], it is their party's matter. But I hope those who have been elected MPs this time will not show disrespect to the people's verdict by not taking oath.”

The minister said many democratic countries have started congratulating Prime Minister Sheikh Hasina. “If they [BNP] do not participate in the democratic process, it will not remain halted.”

Quader urged AL leaders, activists and supporters not to be revengeful to the opposition men and behave with them carefully.

In the December 30 parliamentary, the AL-led Grand Alliance won 288 seats against the BNP-led Oikyafront's seven.

Awami League General Secretary Obaidul Quader today said the process to form the new government is likely to be completed by January 10.

Obaidul Quader came up with the information while talking to reporters after placing wreaths at the portrait of Bangabandhu in front of Bangabandhu Memorial Museum at Dhanmondi in the city, marking Awami League's landslide victory in the 11th national elections.

He also said the gazette notification will be published within one to two days and then the newly elected members of parliament will be sworn in.

Quader said, "I still believe they (Oikyafront) will not disobey the verdict of the country's people. Earlier, they made a mistake by boycotting the 2014 election. Whether they are satisfied or dissatisfied, it's their party matter. But those who have been elected this time will not show disrespect to the people's verdict by not taking oath."

"Many democratic countries have started congratulating Prime Minister Sheikh Hasina. If they do not participate in the democratic process, democracy will not be halted for them," he added.

Meanwhile, the senior Awami League urged the party's leaders, activists and supporters not to be revengeful to the opposition and behave carefully.