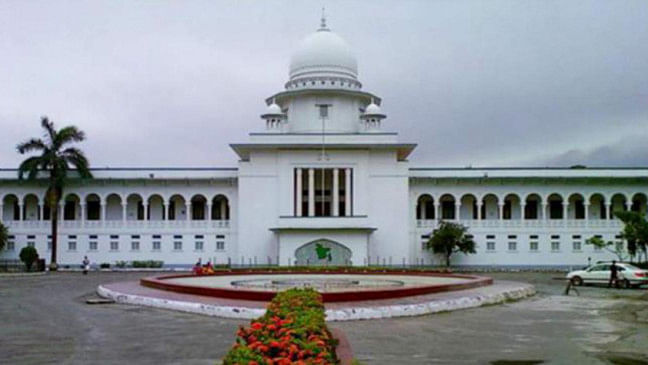 The High Court (HC) today questioned the legality of the Election Commission’s decision to appoint deputy commissioners and divisional commissioners as returning officers for the upcoming general election slated for December 30.

The court also issued a rule asking the authorities concerned of the government and the EC to explain in three weeks why the decision should not be declared illegal.

The HC bench of Justice Syed Refaat Ahmed and Justice Md Iqbal Kabir Liton came up with the rule after hearing a writ petition filed by Supreme Court lawyer Advocate Abdur Rahmanchallenging the legality of the EC’s decision.

Petitioner’s lawyer Barrister Saqeb Mahbub told The Daily Star that the EC cannot appoint DCs as the returning officers throughout the country as per the article 4 of the Representation of People Order (RPO). Rather it only can appoint returning officers from its689 election officers, he said.

The lawyer added that the appointment of the deputy commissioners and divisional commissioners as the ROs for holding the election is a violation of the RPO.

Meanwhile, Attorney General Mahbubey Alamsaid there is no legal bar for the DCs and divisional officers to discharge election duties as ROs following the HC rule as it did not pass any stay order today.

Jatiya Oikyafront Convener Dr Kamal Hossain has urged people to bring about a "vote revolution" by exercising franchise, and said December 30 will be another victory day for the nation with the Oikyafront coming out victorious.

"We won in the past, and we will win this time too. December 30 will be another victory day. You will bring about a vote revolution on that day," he said at a press conference yesterday.

The eminent jurist made the call after attending an emergency meeting of the steering committee of the opposition alliance at his chamber in the capital's Purana Paltan.

Calling upon the voters to cast ballots for “sheaf of paddy”, he said, “The symbol does not belong to any party. It stands as a symbol of unity. Cast your votes for this symbol to free the nation.”

He further said the Oikyafront's win in the polls will be a victory for the people, not for any component of the alliance.

"People's ownership of the country will be restored through the vote revolution.”

The people of this country never bowed down to arms, money and power, he said.

"There is nothing to fear. We fought autocrats throughout our life, and we won, not the autocrats. Had the autocrats won, there would have been no '71 and no Bangladesh," observed Dr Kamal, also president of the Gonoforum.

Urging the voters to go to polling centres in groups early in the morning, he said, "You will be able to enjoy freedom if you cast ballots for sheaf of paddy."

If the Oikyafront is voted to power, the administration would work for the people, instead of protecting the interests of any party, he pledged.

Speaking at the press conference, BNP Secretary General Mirza Fakhrul Islam Alamgir said, “The government has already suffered a moral defeat as it is trying to ensure victory by using the state machinery.”

Earlier in a written statement to the media, the Oikyafront convener said the election was just two days away, but the level playing field was still absent.

The people expected that the situation would change following deployment of the army, Dr Kamal mentioned.

"But the army's role in the election is totally controlled by the Election Commission," he said, adding that it is difficult to expect an effective role of the army in a "controlled election".

"Yet, we hope the people, who are the owner of the country, will be able to exercise the right to vote in a peaceful environment. The Election Commission has to ensure that."

Otherwise, the EC will have to take full responsibility for all its failures and will be held accountable to the people, warned Dr Kamal.

He further said it seems that the public and the police administration as well as the state machinery unilaterally got engaged in destroying effective democracy in the country by taking the chance of "the EC's bias".

"We should not forget that destroying democracy is tantamount to denying Bangladesh's existence and the constitution."

The Oikyafront convener said there is a “tide of the masses” in favour of “sheaf of paddy” despite numerous obstructions, arrests, attacks, filing of cases, arson, bombing, biased behaviour of the administration, inactiveness of the EC, ghost cases and intimidation.

The people consider voting as a festival, but they were deprived of it after the ninth parliamentary polls, he said.

"We hope that the people, who are now united, will thwart any anti-people blueprint of the government and the Election Commission."

He urged the people to vote for their preferred candidates to ensure their ownership of the country and restore democracy.

"The country achieved independence in 1971 because the people were united. If the people remain united, effective democracy and the rule of law will soon be ensured," he remarked.

The High Court today set January 11 next year for rehearing an appeal filed by independent lawmaker and Awami League leader Haji Mohammad Salim, challenging a lower court verdict that sentenced him to 13 years' imprisonment in a corruption case.

The HC bench of Justice Md Moinul Islam Chowdhury and Justice AKM Zahirul Huq set the date for rehearing of the appeal after lawyers for Haji Salim and the Anti-Corruption Commission (ACC) prayed fora date for its rehearing.

On November 11, the HC bench ordered the special judge's court-7 of Dhaka to send all relevant documents of the corruption case against Haji Mohammad Salim to it by December 7.

The ACC filed the corruption case against Haji Salim with Lalbagh Police Station on October 24, 2007 on charge of amassing illegal assets.

The Election Commission’s activities will determine whether BNP and its alliance will stay in the election race till the end, BNP Secretary General Mirza Fakhrul Islam Alamgir said today.

“The activities of the EC have been biased so far. If the commission wants, it can still create the atmosphere of a fair polls,” he told reporters in front of his Uttara residence this morning. The BNP leader was heading to Bogura and Rangpur for electioneering.

The BNP secretary general said, “The election has become questionable. The role of the EC and law enforcing agencies is not satisfactory at all.”

“BNP and its alliance partners had hoped that after army deployment the overall atmosphere would be improved and the election atmosphere would return but that has not happened,” Fakhrul said.

“The way violence is being carried out, opposition campaigns are being barred, which is not at all congenial for a fair election,” he alleged.

The High Court today (June 2, 2022) directed the government to conduct an inquiry into the allegations of harassing Muslim female students for wearing burqa at eight academic institutions.

The court also directed the government to inform the court about steps taken against the persons responsible for the incidents.

The secretaries at the ministries of education and home affairs have been directed to conduct the enquiry and to submit a report in 60 days.

The bench also fixed August 11 for hearing and passing further order on this issue.

Allama Mahbub recently submitted the petition as a supplementary one annexing some newspaper reports on harassment of female students for wearing burqa at the eight academic institutions.

Earlier in July 2019, the HC had issued a rule asking the officials concerned of the government to explain why harassment of female students for wearing burqa at the academic institutions should not be declared illegal and unconstitutional.