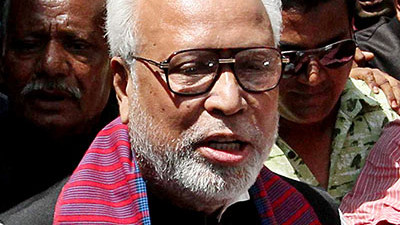 The Election Commission (EC) has withheld the hearing on appeal filed by Krishak Sramik Janata League President Kader Siddiqui against rejection of his nomination papers for Tangail-4 and Tangail-8 constituencies.

The EC started hearing on the appeal in the morning but after listening few words from Kader Siddiqui the commission halted the hearing.

“People want to vote and it’s the Election Commission’s duty to take measures so that the voters can vote safely,” Kader Siddique said.

The EC today started hearing of the remaining 233 petitions, filed against the decisions of returning officers over the rejection and acceptance of nomination papers.

Later, he filed an appeal with the Election Commission challenging the RO’s decision.

Bangladeshi voters can very easily find the polling centres at which they are going to cast their vote tomorrow, December 30.

The Election Commission (EC) has introduced an online platform for voters to know their polling centres.

However, following the publication of this news around 2:09pm, many of The Daily Star’s readers have complained they cannot access the website and are unable to find their polling centres through the official website.

The information will be available on the web portal of the commission from 2:00pm today, said Asaduzzaman Arzu, director of EC’s Public Relations division.

Follow these simple steps to find your polling centre:

- Enter your National ID card number or Voter Form number, date of birth, and capcha code in the window for voter’s personal information. It should be noted that those voters who have 13-digit NID number would have to add their year of birth before the NID number.

- After entering the required information, click on the button for ‘See Voter Information’

- Voila! You will have all the information regarding your constituency, voter number, serial number, polling centre and NID card number displayed on the screen.

A police OC in Satkhira has been withdrawn for allegedly seeking vote for Awami League.

The SP withdrew Maruf Ahmed, officer-in-charge of Kalaroa Police Station, yesterday following an order by the Election Commission. He was attached to the district police lines, said Merina Akhter, additional superintendent of police (sadar circle) in the district.

The development came two days after Maruf allegedly violated the electoral code of conduct by seeking vote for “boat” – the AL's electoral symbol. A video clip of his speech at a programme went viral.

However, Maruf denied the allegation.

Talking to The Daily Star, he said he attended the programme to ensure security and gave a welcome speech. He claimed the footage of the speech was manipulated.

The video clip shows Maruf asking the audience to vote for the AL for continuation of the ongoing development projects.

Meanwhile, Oikyafront leaders in Tangail yesterday demanded withdrawal of Amir Hossain, OC of Sakhipur police, for his “controversial role” ahead of the December 30 election.

They placed the demand at a press conference at Sakhipur Press Club where Dulal Hossain, joint secretary of Sakhipur upazila Krishak Shramik Janata League, read out a written statement on behalf of the Oikyafront, reports our district correspondent.

He alleged that the OC was harassing and torturing activists and supporters of Jatiya Oikyafront candidate Kuri Siddiqui in Tangail-8 (Sakhipur-Basail).

Dulal further complained that police were arresting their leaders and activists in “false cases”. Even those who came out of jail on bail have been picked up again and implicated in other cases by the OC, he added.

Despite repeated attempts, The Daily Star could not reach the OC over phone for comments.

“We are overwhelmed by the interest people have shown over the elections. So, we have to be cautious that their trust and the interest of the people are not affected by any such mistake,” he said while briefing a batch of EC officials involved in result management system.

“Announce results correctly and convey it to the authorised person. A minor flaw in results’ announcement may lead to major anarchy. So, you have to be very cautious,” he said.

Claiming that a spontaneous and festive atmosphere is prevailing across the country, the CEC urged the officials not to let down people’s trust on the commission.

Election Commission revised polls schedule, deferring the 11th general election by a week to December 30 – a decision taken on November 12.

The authorities fixed November 28 as the deadline for filing nomination papers, December 2 for scrutiny and December 9 last date of withdrawal.

Chief Election Commissioner has said that there is a congenial atmosphere in the country – echoing the words of the ruling party.

However, major opposition alliances like the JatiyaOikyafront, which includes BNP, and the BikalpaDhara-led Juktafront sought for delaying the schedule.

Until thus far, it seems that the coming parliamentary election will not be the “non-participatory election” that was its predecessor.

All the major political parties are gearing up to contest in the election and there have been no threats of a boycott or withdrawal unlike the last time.

The Supreme Court today stayed the by-polls of Tangail-4 constituency that was scheduled to be held on March 20.

Meanwhile, the court also granted a leave to appeal petition filed by Krishak Sramik Janata League President Abdul Kader Siddiqui, who wants to be a contender in the by-polls.

A five-member bench of the Appellate Division headed by Chief Justice Surendra Kumar Sinha fixed May 3 for hearing the appeal of Kader Siddiqui challenging the HC verdict that upheld the cancellation of his candidacy for the by-polls.

Kader Siddiqui’s lawyer Raghib Rauf Chowdhury told The Daily Star that the SC may decide about the election of Tangail-4 on May 3 during the hearing of his client’s appeal.

On February 4, the High Court upheld the Election Commission’s decision that had cancelled the candidacy of Kader Siddiqui and directed the EC to proceed with the by-polls.

On February 29, the EC fixed March 20 for holding by-election to Tagail-4 constituency.

The EC on September 16 last year issued a notification fixing November 10 for the by-polls to the constituency that fell vacant following the resignation Awami League lawmaker Abdul Latif Siddique from parliament, and asked aspirants to submit nomination papers by October 11.

As the returning officer on October 13 cancelled Kader Siddiqui's nomination on loan default charges, he filed separate appeals, first with the EC and then with the HC.

Rejected by both EC and HC, Kader Siddiqui on February 25 filed a leave-to-appeal petition with the SC challenging the HC verdict.