'Atmosphere not favourable yet'

Speakers at discussion point out obstacles to free election 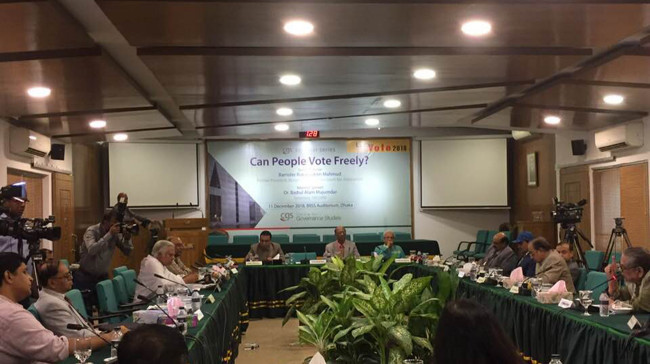 The lack of a congenial election atmosphere was casting doubt over the credibility of the upcoming parliamentary polls, speakers said at a discussion yesterday.

The Election Commission (EC) was not functioning properly yet while the “biased attitudes” of the administration and the police force appeared to be big challenges for holding fair polls, they said.

They made the observations during a discussion titled “Can People Vote Freely?” which was organised by the Centre for Governance Studies (CGS), a body working for good governance, at the auditorium of Bangladesh Institute of International and Strategic Studies in the capital.

Security expert and former election commissioner Brig Gen (Rtd) M Sakhawat Hussain said the EC's limits were apparent during the process of the scrutiny of the election aspirants' nomination papers.

Some papers were rejected due to lack of knowledge among field-level officials while others were not accepted because of them hurrying to finish the task. Some were also rejected “consciously”, he said.

Crediting the EC for accepting a number of nomination papers during the appeal period, he said as a neutral body it should investigate the rejections, he said.

On voting, Sakhawat said it could be free with participation of large number of voters on election day with the presence of women voters being a determinant in gauging the polls atmosphere.

Yet, the election could be riddled with questions if the vote counts did not take place in a fair manner, he added.

Sakhawat also suggested the opposition alliance not to boycott the polls under any circumstance.

“If you boycott [the election] then you lose all the rights; the right to protest, to go to court, and to do anything,” he said.

Addressing the discussion, the keynote speaker Shushashoner Jonno Nagorik Secretary Badiul Alam Majumdar said a favourable atmosphere was absent mainly because the election would be held under a partisan government with continuation of the parliament.

Neutral and bold steps from the EC could have played a vital role in ensuring a congenial atmosphere, said Badiul, an eminent good governance campaigner.

However, the EC was yet to regain “its trustworthiness” due to its questionable role in the recent city corporation elections, he said.

If the EC could not regain the trust through a neutral and bold attitude then “another controversial election may take place on December 30”, he said.

Badiul lauded the participation of all major political parties in the polls and hoped that the EC and the government would prove the people's fear unwarranted by “setting an example of holding a fair, neutral, peaceful and credible election.”

He also said opposition parties had been silenced while foreign countries had also lost their hopes over Bangladesh's democracy. However, the countrymen should not lose their hope to this end, he added.

Gonoshasthya Kendra founder Dr Zafrullah Chowdhury alleged the ruling party was trying to foil the election while it was also provoking the opposition to boycott the polls.

Zafrullah -- who was involved in the formation of Jatiya Oikyafront, a new alliance of BNP and some other parties -- urged political parties to make clear pledges in their election manifestoes over shunning the politics of vengeance so that people were encouraged to vote.

Awami League Advisory Committee Member Yusuf Hussain Humayun said willingness was essential to participate in polls. Those who had the people's mandate would win the election, he said.

Jatiya Party (JP-Manju) Secretary General Sheikh Shahidul Islam said holding a credible election was a big challenge for the government, adding that democracy and development were prerequisites for a country's prosperity.

BNP Joint Secretary General Syed Moazzem Hossain Alal said his party had decided to contest the polls despite facing obstacles and that the government continued to oppress his party men.

Whether the election would be fair and people would be able to cast their votes depended on those responsible for arranging the election, said Mir Nasir Hossain, former president of the Federation of Bangladesh Chambers of Commerce and Industries.

He said although the EC was constitutionally empowered for holding a credible election, it was important to see whether it had the willingness to carry out their constitutional duties and also how far it could go even if was willing to.

Both the ruling and opposition parties were responsible for holding a credible election, said Nasir, adding the ruling party had more responsibility to this end.

Referring to the much-debated polls of 2014, News Today Founding Editor Reazuddin Ahmed said a repeat of that would be unacceptable as the nation was still paying for it.

Referring to the movements over job quota reform and road safety, former ambassador M Shafiullah said young voters had shown that they were capable of making a difference.

Young voters were willing to cast their votes as they had vowed to “repair the state”, said Prof Rashed Al Mahmud Titumir, chairperson of development organisation Unnayan Onneshan.

Manjur Ahmed, vice chairman of CGS, said the issue of holding fair and credible election would remain on the table unless the EC's dependency on the administration and police was reduced.

Election Commission has postponed Chattogram City Corporation election and by-polls to two constituencies due to the outbreak of coronavirus.

"Election to Chattogram City Corporation and the by-polls of Bogura-1 and Jashore-6 have been postponed for indefinite period," Election Commission Senior Secretary Md Alamgir said after a meeting of the commission this afternoon.

"Commission made the decisions taking health risk of people into consideration," he said at a press briefing at the EC Media Centre in Sher-e-Banglanagar area of Dhaka.

The commission will set the new dates when the health department announces the country is free from the risk of the novel coronavirus, he added.

The Chattogram City Corporation election and the by-polls of Bogura-1 and Jashore-6 were scheduled for March 29.