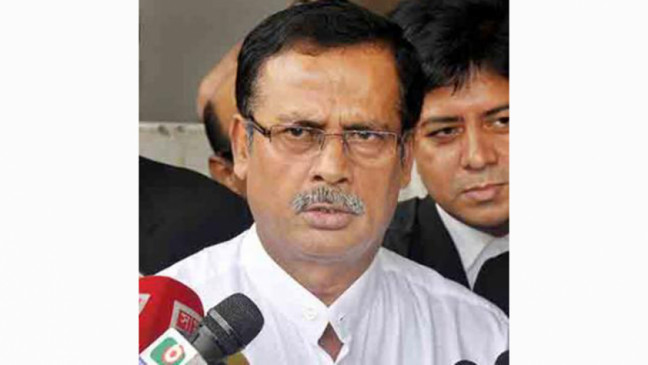 Ruling Awami League today alleged that the BNP-Jamaat-Oikyafront clique is not only spreading false allegation and propaganda to make the election controversial, but also distributing illegal money and trying to destroy the congenial election environment.

Mentioning the arrest of three people in the city on Tuesday for allegedly distributing money among voters to influence the national election, the AL leader said, "Rab men arrested them, including a businessman and a former employee of Hawa Bhaban with Tk 8 crore in cash and cheques of Tk 10 crore, a poster of BNP-nominated candidate with Tarique Rahman’s photograph and a full voter list of a constituency."

"The primary investigation says this huge money was distributed to disrupt and influence the upcoming national election alongside creating a law-and-order situation through violence," he added.

Nanak also alleged that as many as Tk 150 crore was distributed across the country in the last two months.

The AL leader said the incident hinted a big conspiracy against the country, the upcoming election, and involvement of Pakistani intelligence ISI.

Pointing at Dr Kamal's Tuesday’s conversation in a meeting with the Election Commissioners, Nanak said the nation does not expect such “arrogant attitude” from any democratic party.

"We want to say clearly that every party will have to behave in a democratic and legal way to hold a fair and participatory election.”

He claimed that the BNP-Oikyafront alliance is always trying to blame the Awami league for the violence caused by their intraparty conflicts.

Prime Minister Sheikh Hasina today said the biggest achievement of Awami League through its sacrifices and endurance is the liberation of Bangladesh.

"The achievement that came through sacrifices and endurance of Awami League is the liberation of Bangladesh...Today, we have a country of our own, we have our dignity as a nation...This is the biggest achievement," she said in the parliament during an unscheduled discussion on the 71st founding anniversary of Awami League.

The PM, however, regretted that when Father of the Nation Bangabandhu Sheikh Mujibur Rahman was leading the war-torn country forward, "Mirjafar" (betrayer) group of Mushtaque and Zia (Ziaur Rahman) assassinated him brutally.

"As a result, the country's progress was blocked," Hasina added.

Hasina, also leader of the House, said since formation of the political party, the organisation has always served the humanity and people, it always speaks for the deprived and struggles to establish their rights.

The AL president said there was a time when frantic efforts were on to eradicate the name of Bangabandhu Sheikh Mujibur Rahman from history, but it was not possible.

The premier added: "Truth cannot be erased. Father of the Nation is not with us physically, but his existence remains in the hearts of Bengalis. We have to realise his dreams. We will ensure a hunger-free, poverty-free golden Bengal."

“EVM is a scientific voting system where there is no need of polling agents of any party as the machine itself works as the guard. If the fingerprint doesn’t match, you can’t vote,” he told reporters during a briefing at the AL party chief's Dhanmondi office this afternoon.

“The EVM is such a sturdy system that it works as polling agents of all parties,” he insisted, while replying to a query on allegations of driving out agents of rival candidates from the polling booths.

Responding to a question, Nanak said, BNP Mayor candidate Ishraque Hossain brought allegations that his agents are being driven out, but BNP senior leader Mirza Abbas cast his vote peacefully and he saw BNP agents there.

He alleged that BNP could not place agents at the polling centres due to their organisational weakness but now they are blaming Awami League. “So, their allegations are not acceptable.”

The AL leader alleged that BNP is trying to create chaos but people have rejected the party.

Jatiya Oikyafront will launch its road march from Tongi tomorrow, to garner public support ahead of the election on December 30.

The march will begin from a rally at Sharifuddin Government Academy ground, Syrul Kabir Khan, a staff of BNP chairperson’s press wing, said.

The rally will end in Sherpur and make stops across several points on the road through Gazipur and Mymensingh, he told The Daily Star this evening.

Dr Kamal Hossain and other key leaders are supposed to attend the programme.

The announcement of the road march came from yesterday’s meeting of the alliance.

WHAT IS JATIYA OIKYAFRONT?

The Oikyafront was formed on October 13 with the demands of a national election under a neutral government after dissolution of parliament and release of BNP chairperson Khaleda Zia from jail.

Currently, they are campaigning with a seven-point charter including freedom for BNP Chairperson Khaleda Zia and election under a nonpartisan government.

The 11-point goal announced by the alliance includes ensuring checks and balances in the state power, decentralisation of administration, freeing MPs from the stringent restrictions imposed on them under article 70 of the constitution, formation of a constitutional commission to make appointments to all constitutional and other important posts and full independence of the judiciary.

The alliance also announced a seven-point demand, including the one for holding the next parliamentary election under a nonpartisan government, dissolution of parliament before the polls and reconstitution of the Election Commission.

Seven MPs-elect of Jatiya Oikyafront yesterday refrained from taking oath and the alliance claimed that ruling party men had stuffed the boxes with “30 to 60” percent of the ballots the night before the polls.

In the memorandum, the alliance also alleged that the administration was blatantly used against the people. It was a "breach of trust and the voters were deceived”, the Oikyafront said.

"This election is a cruel mockery of the people,” Fakhrul, also the BNP secretary general, told reporters afterwards.

"There is no question of taking oath as we have rejected the results,” he said replying to a query about whether the seven lawmakers-elect would take oath.

The alliance yesterday submitted some “evidence of election-related anomalies and undue influence since the announcement of election schedule”.

"We've submitted evidence to the commission. We hope they [commission] will review those,” Fakhrul said. "The nation was pushed into darkness through this cruel drama in the name of election.”

The AL rowdies with the help of law enforcers forced all shops to close across the country before 9:00pm the night before the election to create a ghostly atmosphere, the memorandum said.

After stuffing the ballot boxes at night, they cast false votes during election day and voters were forced to vote for boat, it said.

It said ballot papers in almost all polling centres ran out by noon and in many cases polling officials took lunch breaks.

The night before the polls, AL men terrorised voters and threatened them with dire consequences if they went to vote, the Oikyafront claimed, adding that the AL men showed off their muscle power at intersections to intimidate voters.

“Law enforcers did not take any steps when help was sought.”

Counting of votes began before 4:00pm at many places, the Oikyafront said, adding that the EC's role was mysterious.

It said the EC and the courts cancelled candidature of 18 Oikyafront candidates and at least 16 other candidates were arrested.

There was no change in the civil and police administration. Judicial and executive magistrates were made inactive, it claimed.

“The media and the social media were controlled and the army was made inactive,” it said.

The EC must take the responsibilities of depriving the people of the country from exercising their right to vote, it said.

Four BNP lawmakers-elect in the December 30 national election took oath as members of the 11th parliament this afternoon.

Speaker Dr Shirin Sharmin Chaudhury administered the swearing-in at the Jatiya Sangsad Bhaban, our correspondent report from the spot.

They took the oath just four days after another BNP-lawmaker elect, Zahidur Rahman, took oath as MP in a surprise move on April 25 against the party’s decision of not joining parliament.

BNP took part in the December 30 national election and secured victory in only six seats out of 300 parliamentary constituencies. Besides, Gono Forum bagged two seats in the election.

Seven out of the eight MPs-elect have already taken the oath. BNP Secretary General Mirza Fakhrul Islam Alamgir, who was elected from Bogura-6 constituency, he did not take the oath.

With today’s four lawmakers’ oath, 299 MPs-elect out of 300 in the 11th parliamentary polls have so far been sworn in.

BNP along with Gono Forum and some other parties joined the election under the banner of Jatiya Oikyafront.

After the December 30 national election, BNP and Gono Forum equivocally rejected results of the polls and brought allegations of vote rigging, ballot stuffing and widespread violence.