Cause for heartburn for both govt and EC: Rizvi 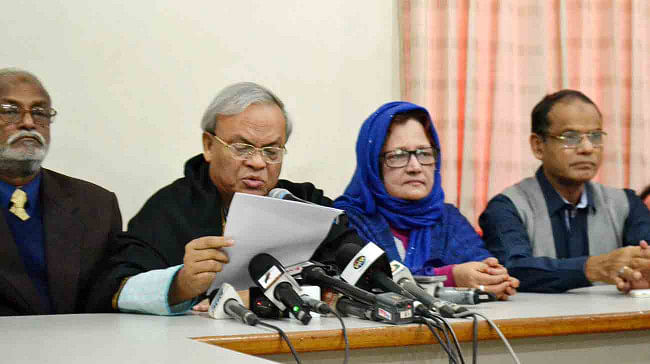 The one and a half hours meeting that began at 10:00am was held at the US envoy's residence.

There was no briefing from either side about the meeting.

A BNP leader close to Fakhrul said the BNP delegation informed the US envoy about their party's observations over the election and various “irregularities”.

He said the BNP team also provided Miller with documents, including paper cuttings and video clips, on “election irregularities and vote fraud”.

The BNP and its alliance partners faced a serious debacle in Sunday's general election as they got only seven seats out of 298.

President Abdul Hamid has invited Awami League President Sheikh Hasina to form government as she has gained the confidence of the majority of the members of the Parliament.

The invitation came after the current Premier Sheikh Hasina went to meet him at the Bangabhaban this afternoon, said Press Secretary to the president Joynal Abedin.

Earlier, Sheikh Hasina was unanimously elected chief of the Awami League Parliamentary Party (ALPP) for the 11th Jatiya Sangsad during the first session of ALPP this afternoon.

The government is often seen to boast of its zero tolerance to corruption. But as the latest Transparency International Bangladesh (TIB) survey on corruption in service sectors shows, an extremely high level of tolerance is being shown to corruption by state officials. Out of the 15,454 homes surveyed by the TIB, about 71 percent said they had to endure corruption while trying to get public services last year. Corruption means bribery, extortion, embezzlement, deception, negligence of duty, nepotism, etc – for which, according to the TIB, they had to pay an estimated Tk 10,830 crore in bribes, which is 5.9 percent of the revised budget of FY 2020-2021. These practices were found rampant in 22 service sectors that are considered to be "riddled with petty corruption."

In other words, the TIB report put a number on the suffering of citizens who have to cross a lot of invisible hurdles before they can get a service from public officials, whose salaries are paid from their taxes. At least 70.5 percent of households reported having to deal with graft when getting passport-related services, while 68.3 percent had to face the same when getting the services of BRTA. Ironically, 74.4 percent of respondents had to face corruption when seeking the services of law enforcement agencies. If such lawlessness is demonstrated by those tasked with enforcing the law of the land, it proves how embedded corruption has become in our system. And the authorities are clearly in no rush to hold these corrupt officials to account, either.

From the look of things, there seems to be a lot of institutional tolerance for corruption, as there is a lot of barriers to preventing it or punishing corrupt officers. For example, section 41(1) of the Public Service Act 2018 requires law enforcers to get prior approval from the government or relevant agencies to detain government officials in criminal cases. The High Court recently declared this provision illegal, but the verdict has been stayed by the Supreme Court till October 23, meaning that the legal barrier to prosecuting state officials for crimes, including corruption, will continue to be in a place for some more time.

The politicisation of police

As for the TIB report, it has been found that citizens were less likely to face demands for bribes when seeking digitalised public services. While it is recommended that all public sectors utilise digitalisation wherever possible to make things easier and faster for citizens, this is no answer to corruption. Corrupt officials have shown considerable ingenuity in finding new methods of continuing their practice. Therefore, the Anti-Corruption Commission must be allowed to play a leading role in finding and prosecuting them. We urge the higher authorities to match their zero-tolerance commitment with stern action to combat corruption and establish accountability in all service sectors.

Coming a year before the general election, and nearly a year after the formation of the incumbent Election Commission, it is natural that the six by-polls held Wednesday would be viewed against the wider political backdrop. It was, therefore, frustrating to know how little things have changed, despite the relative lack of violence, which would have been something to look out for under different circumstances. It's quite evident now that any changes, or promises of changes, made over the past year or so only cemented the status quo, which doesn't bode well for our electoral future.

Calling the by-polls 'free and fair' dims hope for 2024

If we're to pick a word to summarise the by-polls, it would be "absence" – absence of voters, absence of interest from the wider society, absence of strong safeguards against irregularities, absence of main opposition BNP, whose lawmakers' resignation from parliament had led to the by-polls. Voter turnout was poor in all the six constituencies. As per an estimate, only about 28 percent of voters showed up, in a trend that has been persistent throughout all local elections and by-polls held over the last few years. The predictable nature of election outcomes, and the lack of trust about the neutrality of responsible state departments, seem to have caused ennui and despair among the people.

It seems almost futile to ask why the Election Commission is failing to address voter apathy despite repeated appeals from election observers. The EC, after the latest by-polls, again stuck to its "peaceful and well-organised" narrative, even though we have received reports of various election-related irregularities from a number of constituencies. The EC's failure to recognise that the mere appearance of elections is not enough is really alarming. We need fair and participatory elections. And we need the EC to restore the trust of all voters and opposition parties alike.

Another major concern about the by-polls is the "disappearance" of the main rival of the eventual winner in the Brahmanbaria-2 by-poll. This by-poll – which saw a voter turnout of less than 16 percent, the lowest of all constituencies – has been in the news ever since the winner, expelled BNP leader Abdus Sattar Bhuiyan, was backed by the ruling Awami League, which didn't field a candidate there. Abu Asif Ahmed, an independent candidate, has been missing for about a week now. Which makes us wonder: why is nothing being done to find him? What message does it send to the political opponents of the ruling party? And how long will the EC refuse to address the concerns of the opposition parties?

Is the EC fighting an unwinnable war?

The culture of fear, distrust and criminality that still plagues our electoral system must be removed, and the ruling party must play a leading role in this. Lack of violence in one election means nothing given how political violence and repression continue to occur in every other sphere. If anything, the recent by-polls have shown that we have remained stuck in the same spot for too long, and the authorities must allow genuine reforms to break this status quo. They must help create a level playing field for all parties, and restore public trust in the function of the electoral system.

Ambassador of Switzerland to Bangladesh René Holenstein today said Switzerland commended all parties for their participation in 11th Parliamentary Elections in Bangladesh.

“Switzerland took note of the results of the 11th Parliamentary Elections and commended all parties for their participation in the process,” said Holenstein during a meeting with Bangladesh Foreign Secretary M Shahidul Haque today.

The Swiss ambassador deplored the violence that occurred before and during the elections causing unnecessary suffering and pain, according to a statement.

Referring to reported accounts of intimidation, irregularities and further obstacles to a level playing field throughout the process, which have tainted the electoral campaign and the vote, Ambassador Holenstein underlined the need to address these reports in full transparency and according to the rule of law.

“Switzerland trusts that the new Government of Bangladesh will uphold the democratic values it was elected upon and that it will support the people’s will to move towards democracy in full respect of human rights and fundamental freedoms,” he said.

He assured the foreign secretary that Switzerland looked forward to its continued partnership with Bangladesh.