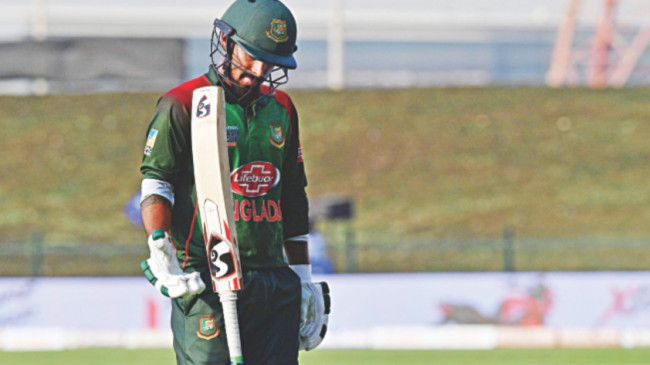 However many runs he has scored in ODI cricket, the scale of Liton Das's ambition is staggering. Wiley Afghanistan leg-spinner Rashid Khan is the biggest bogeyman around for Bangladesh cricket. He bowled nine overs for 13 runs and picked up two wickets in the first Bangladesh-Afghanistan match in the ongoing Asia Cup on Thursday. So even when, after the customary loss of two early wickets with 18 runs on the board, Mushfiqur Rahim and Liton stitched together a 63-run partnership all eyes were on how they would fare when the bogeyman came onto bowl.

Liton hit the third ball of Rashid's first over inside-out over cover for four -- a sparkling example of the talent he possesses. What followed, however, was a slog sweep off the very next ball and, predictably, it went straight up and was caught at first slip. The shot reflected a mindlessness that has not only defined his career so far, but also infected the batsmen around him yesterday. At least his ambition cannot be faulted -- in the very first over, he tried to hit a bowler out of the attack against whom his teammates could barely buy a run three days ago.

Bangladesh's fear of Rashid Khan is on another level -- beyond perhaps even that held by Daryll Cullinan when Shane Warne took the ball in years gone by. Liton's insolence in hitting the 20-year-old for four in his first over must have made Shakib Al Hasan, the batsman coming in after Liton's brain explosion, nervous. Off his second ball the left-hander tapped Rashid to short midwicket -- straight to short midwicket -- and hared down the pitch towards a horrified Mushfiqur. The run out was as straightforward as it gets.

Which is more than can be said of the next run out, but the circumstances were similar. In the 21st over, Imrul nudged Rashid towards short fine leg, where the fielder misfielded and allowed a boundary. That apparently meant that you have to get down to the other end as soon as possible, regardless of where you play the ball. Imrul bunted a googly towards short midwicket, took two steps down the track and stopped. But it was too late for Mushfiqur who was halfway down the track and although there was doubt over whether the stump was broken with the hand holding the ball as Rashid fell backward onto the wickets, the third umpire probably did not want to interfere in Bangladesh's hara kiri strategy.