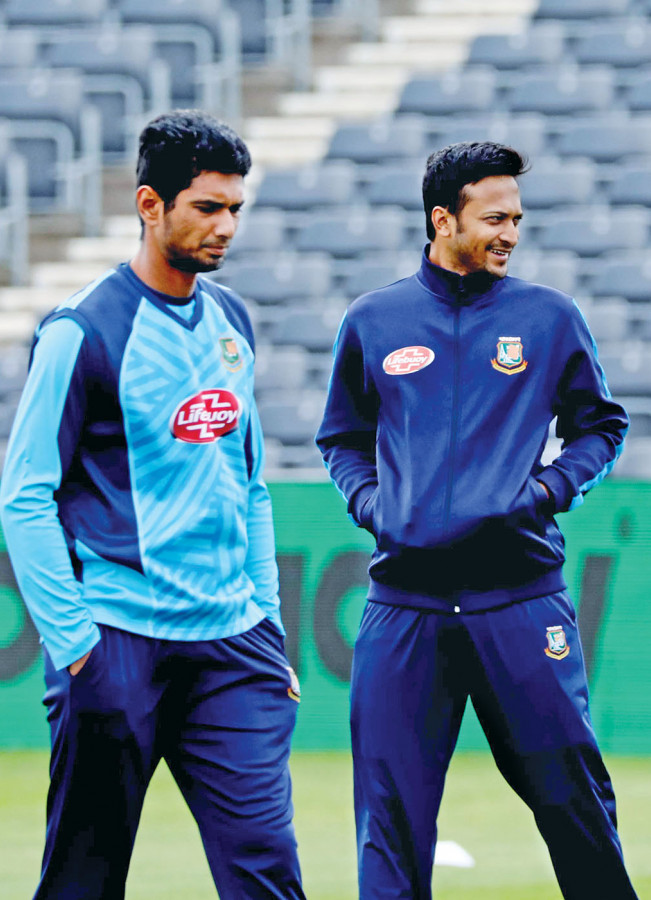 When Shakib Al Hasan scored his maiden World Cup century in Cardiff against hosts England on Saturday, he did not embark on a celebratory run. The champion Bangladesh all-rounder just raised his bat to acknowledge the crowd's applause.

It might give you the impression that he is a kind of player who does not like emotional override. His 121 off 119 balls might not have quite matched England opener Jason Roy's 153 off 123 balls, but the southpaw's innings was yet another statement of the positive intent he has been demonstrating over a course of 13 long years since his ODI debut in 2006.

You are allowed to criticise him for his off-the-field attitude -- the latest being mysteriously missing the team photo session prior to the team's departure for the World Cup.

But on the field, the 33-year-old athlete is a top professional who has only learnt how to give his best day in and day out. His aggression might at times backfire, but this is how he approaches his game, be it with the ball or bat. He is also one of those few Bangladeshi fielders who attacks the ball.

Prior to the World Cup, Shakib set a lofty personal goal of becoming the player-of-the-tournament and he is already on his way towards that target by scoring 260 runs, the highest in the World Cup so far, and scalping three wickets in as many games.

Shakib is a different breed in the Bangladesh ranks. After the heavy defeat against England, the Tigers travelled to Bristol from Cardiff to play their next game against Sri Lanka. It has been reported that the players were still reeling from that punishing defeat.

But those who have closely followed Shakib over the years will tell you that a defeat never depresses Shakib. He is a kind of player who will go out the next day with an intent to cut the ball hard if that was on the fourth stump irrespective of the situation or even if he was coming with a couple of ducks behind him.

In a cutthroat profession, he loathes the idea of different roles for seniors and juniors. To him the role is defined for every member of the team and it is up to each individual to live up to their role irrespective of being a senior or junior.

During the 2017 ICC Champions Trophy, Shakib was having a chat with this reporter while his daughter was dawdling at the team hotel lobby in London. His daughter suddenly tumbled onto the floor. I promptly tried to volunteer to pull his lovely little kid up, but Shakib refrained me and said: "Let her get on her feet by herself." He was not pretending. It was perhaps something natural that goes with his character.

He is also not the kind of player who cherishes his personal success most. He has always been most engrossed and animated when he sniffs the chance of his team's success. He has demonstrated that emotional override before.

It was logical from Shakib's perspective that he did not celebrate his century against England because he knew it may not still win the game for his team.

Bangladesh will take on Sri Lanka in Bristol today. A win will put the Tigers' World Cup ambitions back on track. Going into the game and beyond, the Tigers need Shakib's steely resolve to put behind the England disappointment.

Bangladesh's Shakib Al Hasan -- banned from all cricket for two years, with one year of that suspended – has been named in Wisden's ODI team of the decade.

The list was made by a panel of writers who contribute to Wisden, colloquially the Bible of cricket. Shakib played 131 ODIs in the last 10 years, scoring 4276 runs at an average of 38.87. The all-rounder also scalped 177 wickets, the most by a spinner in the last decade.

His highest knock of 124 not out came against West Indies in the World Cup in England. He ended up as the third-highest run-getter at the World Cup with 606 runs at an average of 86.57.

The players in Wisden's ODI team of the decade:

England were mistakenly awarded an extra run during their nail-biting World Cup win over New Zealand at Lord’s, a member of the sport’s chief rules committee told media on Monday.

A freak fielding deflection off Ben Stokes’ bat that raced to the boundary saw the team awarded six runs with three balls to go in the final over on Sunday.

Scores were tied at the end of regular play and the resulting Super Over shootout, with England then handed their first-ever World Cup victory for their superior boundary count.

But former umpire Simon Taufel told Fox Sports Australia that umpires had made a  “clear mistake”, as the batsmen had not crossed for their second run.

“They should have been awarded five runs, not six,” he said, adding that England’s Adil Rashid should have faced the second-last ball instead of Stokes as a result.

The Australian defended the match umpires, who he said had to make a complicated judgement, and said it would be  “unfair” to say the decision altered the outcome of the tournament.

“Unfortunately that sort of thing happens from time to time. It’s a part of the game that we play,” Taufel said.

“I don’t wish to nitpick, just hope it never happens in such moments ever again.” England, who have often cited a humiliating defeat by New Zealand at the 2015 World Cup as the catalyst for their climb to the top of the one-day international rankings, finally have a World Cup win to go with their three losing appearances in the 1979, 1987 and 1992 finals.

By contrast, defeat is devastating for New Zealand, who were also looking to win the trophy for the first time after being well beaten by Australia in the 2015 showpiece.

But what is he like away from the global spotlight and the pressure-cooker situation of international cricket? What kind of power does he wield in his own home with his beloved wife and three-year-old daughter? Or how big a foodie is he?

In an uncharacteristically frank conversation with The Daily Star's Mazhar Uddin at his residence today, Shakib answered many of those questions and more.

Bangladesh all-rounder Shakib Al Hasan returned to Dhaka yesterday morning  alongside the team following a three-match ODI series in Chattogram and refreshingly he was available to reporters and fielded questions after turning up in the afternoon to fulfil a commercial commitment.

All and sundry were curious to know about his availability for the upcoming Test series in South Africa after Bangladesh Cricket Board (BCB) president Nazmul Hassan confirmed on Monday that Shakib was going to play the Tests. "Since he isn't playing in the IPL, there is no other option," the BCB chief informed after the third ODI against Afghanistan in Chattogram.

However, Shakib was in no mood to talk shop. Instead, he appeared elated to share his passion towards music and riding bikes.

Shakib said that he loved to ride in his hometown of Magura and sometime attempts to do the same in Dhaka around midnight when the roads are free. He also underlines the importance of taking all necessary safety measures before driving a bike.

The premier all-rounder added that he loved music and tunes were a must when driving around. He also elaborated on his love affair with a classic instrument, the guitar.

Despite these unusually enthusiastic tangents, reporters remained keen on knowing his decision regarding the Tests series in South Africa.

Hassan had added during his earlier comments: "After the game today (Monday), I had a talk with Shakib from afar. I can't go near. I told him that when you return after playing the South Africa Tests, I will sit down with you. He told me with a smile 'whatever you say'."

Yesterday, Shakib responded only with a wry smile when queried about those comments.

The gloomy weather yesterday in Cardiff, where it rained heavily until late afternoon, did no favours to Bangladesh ahead of today's World Cup match against World Cup favourites and hosts England.

Skipper Mashrafe Bin Mortaza, Sabbir Rahman, Mushfiqur Rahim, Mohammad Mithun and Mosaddek Hossain were all restricted to indoor practice while the rest of the team opted to take a break from practice because they could not train outdoors. For a team that places great importance on momentum, it was not the ideal preparation for perhaps the toughest examination of their campaign, especially as they are coming off a loss against New Zealand in their last match.

The defeat threw light on the less-than-ideal form of some important players, and skipper Mashrafe Bin Mortaza included himself and star opener Tamim Iqbal in that category. Mashrafe has conceded 81 runs from 11 wicketless overs in the two matches so far, while Tamim has scored just 40 runs from 67 balls after getting starts against both South Africa and New Zealand -- uncharacteristic for a player who has been known for cashing in on good starts for the past four years.

"We are in the middle of the tournament now, so it is not as if we can change a lot through practice," Mashrafe told reporters yesterday. "But for some players, practice sessions are very important. If you talk about me, then obviously today practice was very important to top up certain things that are not happening for me on the field. Tamim is feeling the same. In that regard, I think we have been a little unlucky. For some of us the practice session was important, to get used to the wind, not being able to do which may not be a positive sign for us. But you can't do anything about the weather; we have to try to keep our confidence levels high."

Mushfiqur is one of those in form, but he has been a target of criticism for letting off Kane Williamson in the two-wicket loss against New Zealand, when he disturbed the bails with his elbow and negated a sure run-out at a crucial juncture.

"I think Mushfiqur is completely okay, and there is no reason not to be normal," said Mashrafe when asked about Mushfiqur's state after a social media barrage against the keeper. "And of course, there will be criticism surrounding those who are working. It is easy to do that. The team is supporting each other. It is normal, the people who are talking about it are the ones not able to take it normally."