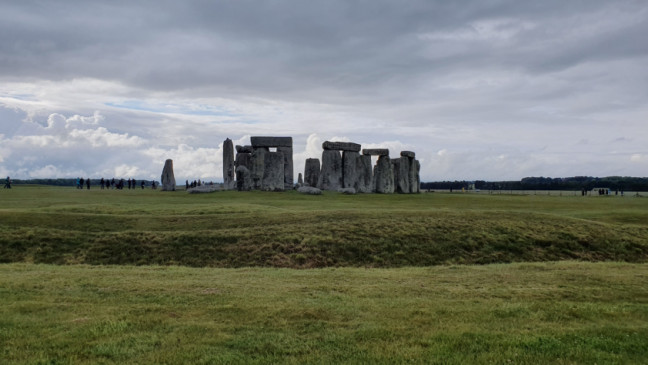 Wallpaper in the flesh, or stone

That opens up possibilities to do a bit of sightseeing and Taunton offered the opportunity to make the 60-mile drive to the east to visit Stonehenge. For those old enough to remember, as well as being the subject of many documentaries and posters, the prehistoric monument in Wiltshire was an iconic wallpaper on Windows 95, which lent a nostalgic element to visiting a site and monuments that are up to 5,000 years old.

The centrepiece of Stonehenge, the entirety of which covers an area of 26 square kilometres, is of course the ring of standing stones arranged in a circle that has engendered many theories surrounding its creation, including those of alien intervention.

Today, 13-feet high stones arranged in a circle may not immediately induce awe, but considering that the main site -- there are other simpler monuments dotted across the wide open landscape -- was built at around 2200 BC, the scale of the construction is awe-inspiring. The function of the stones, the method of creation is all up for debate. All that can be ascertained around 4,000 years later is that the structure is aligned to the sunset in winter solstice and the opposing sunrise in summer solstice. As with everything, the group of Bangladeshi journos were undecided about whether the trip was worth it based on just the stone circle, but there was agreement that it was worth it to see a wallpaper in the flesh -- or stone.

For this reporter, however, getting to Stonehenge and back was almost as big a treat as seeing the prehistoric site because, having suffered the slings and arrows of outrageous Dhaka traffic, it was an opportunity to drive a car in a land where laws are actually obeyed. But by the end of the day, that had also proved to have its downsides. Making our way back to our hotel from Taunton town centre through the motorway was a veritable odyssey. Having completely surrendered ourselves to Google Maps, we were sent round and round because, as we realised after the second trip back from nowhere, the motorway that serviced our hotel was shut down for repair work (even though it seemed perfectly fine earlier in the day). In Bangladesh, we would just have gone the wrong way.

Otherwise driving was a pleasure. The biggest adjustment, of course, was actually paying attention to red lights and sticking to a lane, failing which the dirty looks from fellow motorists hurt as much as verbal abuse from bus drivers back home.

The only worry is, when we get back home, I will have to cop the verbal abuse when I alone am halted in front of a red light on Bijoy Sarani.