Why England of all places! 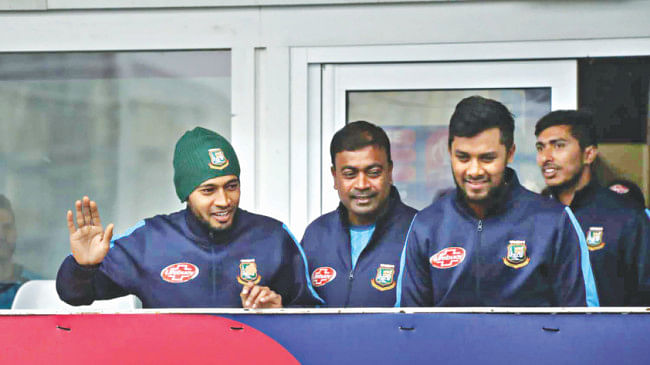 Mushfiqur Rahim (L) was seen waving to their fans with a look that said ‘no luck today’ before their World Cup match against Sri Lanka was called off due to rain. PHOTO: BCB
Sakeb Subhan Sakeb Subhan

As rain lashed the County Ground in Bristol yesterday, which it had for the last week and will for the foreseeable future, it became apparent long before the 4:00pm cut-off time that the World Cup match between Bangladesh and Sri Lanka would be abandoned. There were hundreds of Bangladesh fans, some who travelled from London. There were about 30 Bangladeshi journalists at the venue. Bangladesh wicketkeeper-batsman Mushfiqur Rahim was seen on the dressing room balcony as early as 10:50pm while much of the team remained ensconced at the team hotel.

“Score a century today Mushfiqur,” was one cry from the gallery opposite after Mushfiqur came out of the dressing room to help lift the spirits of his adoring countrymen. “We will beat India,” was another that rose up from among about two dozen Bangladesh fans there. Mushfiqur just raised his right hand beyond the railing of the balcony, letting the steady drizzle splash his palms, smiled and shrugged as if to say: “No luck today, guys.” He was standing beneath a sign that read ‘Cricket’s greatest celebration’.

This was the second match abandoned at this venue after the Sri Lanka-Pakistan game met a similar fate on June 7, and the third of the ongoing World Cup to end in a no-result. Among the fans huddled under whatever shelter that could be gotten beneath the stands, there were murmurs to the effect of “It’s not a good time for cricket here” and “I wonder why they would schedule the World Cup here.”

Others ruefully nodded agreement. But all this was taking place behind the sightsceen of a ground that was bought by WG Grace in 1889, whose name along with Gilbert Jessop’s and Wally Hammond’s grace the three apartment buildings that dominate the view behind the stands opposite. Grace is one of the most storied cricketers of all time, hailed as the father of modern batting, mostly because he revolutionised the sport in its birthplace. So as we wondered why a World Cup was taking place in this blighted weather, a bigger, more salient question popped up as we gazed upon the three buildings through the miserable drizzle being driven sideways by a cold wind.

Why indeed England? What kind of mentality and perverse tendency towards misery would compel a nation to invent a game that takes eight hours out of a day, knowing that eight hours without rain is not the likeliest scenario even during what they call ‘summer’?

Maybe that is why they like underdogs, or profess to anyway, and have made a culture out of making a fuss out of every exercise (take any royal ceremony as an example) -- because every simple thing has to be a fraught endeavour. Cricket in the summer? Not likely!

Or perhaps, the entire British drive to colonise the world was so that, having foolishly invented a game that they could not play at home, they could pursue their ‘summer sport’ in drier, more predictable climes. A leap too far? What else would you expect of a sports journalist forced to become a weatherman?