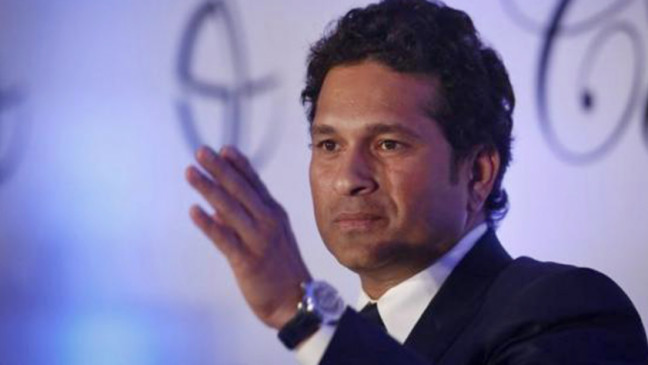 India need to space out their experienced batsmen at the World Cup in England and veteran Mahendra Singh Dhoni is best suited at number five, according to batting great Sachin Tendulkar.

Having Dhoni, whose 341 ODI appearances makes him the most experienced player at this year's World Cup, at number five would ensure the former India captain could nudge along before exploding in the final overs, believes Tendulkar.

"My personal opinion is Dhoni should be batting (at) five," Tendulkar, part of the Dhoni-led squad who won the 2011 World Cup on home soil, told ESPNcricinfo.

"I still don't know what the team combination would be, but if you are going Rohit and Shikhar as openers, to Virat at No. 3 and whoever at No. 4 then Dhoni could be No. 5. Then Hardik Pandya, an explosive player, follows them.

"That way the experienced batsmen are well spaced out and Dhoni can stretch the game towards the end where he himself can be explosive along with Hardik.

"From No 5-8 you are looking at finishers, who stay till the end and soak in that pressure. I feel we are well equipped to do that."

Dhawan is the lone left-hander in India's strong batting lineup and Tendulkar said the opener must bat deep into the matches to help dominate the bowlers, especially the leg-spinners.

"A left-right combination always helps because that means the bowler has to adjust his line every now and then and the (bowling) captain has also to keep thinking," said Tendulkar, who remains the only cricketer with 100 international centuries against his name.

"And if there is a partnership the job becomes even more tougher. So, yes, it is important for a left-hander to be there to put pressure on the legspinner or for that matter any bowler."

England's home series against Pakistan has convinced Tendulkar that it would be a high-scoring World Cup played on flat tracks and with two new balls which negate reverse swing.

"I believe if you have quality spinners to bowl in the middle overs they would end up picking wickets.

"It is all about bowling in partnerships - if quality bowlers could bowl in tandem and create pressure on the batting line-up, that is one way of countering all these factors (that) I feel are not in favour of the bowlers."

Cricket great Sachin Tendulkar called on Indians to keep sport "free from personal attacks" after a Sikh player from the national team suffered a torrent of online abuse for dropping a catch in a match against Pakistan.

Most of the vitriol directed against Arshdeep Singh, after he dropped an easy catch at a crucial moment in the Asia Cup clash on Sunday, focused on the fact that he is from India's Sikh minority.

His Wikipedia entry was briefly altered to link him to the Khalistan Sikh separatist movement and Twitter users accused him of having ties to Pakistan.

There were also large numbers of tweets supporting him.

Former player Tendulkar, the top run-scorer of all time who still enjoys huge adulation in India, tweeted on Tuesday that all "athletes representing the country give their best and play for the nation always.

"They need our constant support & remember, that in sports you win some & you lose some. Let's keep cricket or any other sport free from personal attacks," he wrote.

It is not the first time that cricketers from Hindu-majority India's religious minorities have faced such attacks.

Last year Muslim player Mohammed Shami became a target of abuse after India were thrashed by Pakistan in the T20 World Cup.

India's hopes of qualifying for the Asia Cup final on Sunday are all but over after defeat to Pakistan was followed by losing to Sri Lanka on Tuesday in Dubai.

If Pakistan beat Afghanistan later Wednesday, they will knock out India and face Sri Lanka in Sunday's final.

Mahendra Singh Dhoni has stepped down as India's limited-overs captain but will still be available for selection, the Indian cricket board (BCCI) said on Wednesday.

"Mahendra Singh Dhoni has informed the BCCI that he wishes to step down as the captain of the Indian Cricket Team from the One-Day Internationals and the T20 Internationals formats of the game," the BCCI said in a statement.

Chief selector MSK Prasad stuck to the usual line that Yuvraj had been "rested" and not "dropped" – but was non-committal when asked if Dhoni would feature in India's plans for the 2019 World Cup, Times Of India reported.

"We will see, we will see. The legend that he is, we don't want to make it (public)...but yes we have a plan (for him)," said the former India wicketkeeper,” Prasad said.

"We don't say it is an automatic thing... but we will see. We are all stakeholders (in Indian cricket). We all want the Indian team to do well. If he is delivering, why not? If he is not, we will have to look at alternatives," said the 42-year-old Prasad.

Prasad hoped that Dhoni’s career would mirror that of Andre Agassi, the tennis star who returned to the top of the world in the later days of his career.

The India selectors have decided to introduce ‘rotation policy’ to build for the 2019 World Cup.

"You said that we have dropped him (Yuvi). Let me be very clear; we have started a policy where we have identified some set of players (around 25) who will be considered for the next four-five months, and we will rotate them in this period, after which we will come to a picture that these are players who will go on to play the World Cup.

“In that process we have started, we will rotate and rest some of the main players, so that we'll see how some of these youngsters do, and then take a call by the end of the year," Prasad said.

Skipper Eoin Morgan said England's batting collapse in the third Twenty20 international was their worst performance in recent times after India inflicted a crushing defeat in the series decider in Bangalore.

Leg-spinner Yuzvendra Chahal's Twenty20 best of six for 25 combined with Jasprit Bumrah's three wickets ripped through the English middle and lower order, with five batsmen being dismissed without scoring.

"I can't put my finger on it. We haven't produced a batting performance as bad as that in two and a half years," Morgan told reporters at Bangalore's M Chinnaswamy Stadium.

"We pride ourselves on our batting and it's been our strong suit for a long time but our bowlers have outperformed our batters."

Since their meek exit in the group stage of the 2015 World Cup, England have been a team transformed in short-form cricket and reached the final of the World Twenty20 last year under Morgan's captaincy.

Their batting line-up is seen as their great strength, with some of the most powerful hitters in the game.

But after reaching 119 for two, England suffered a stunning collapse with Chahal taking the wickets of Morgan (40) and Joe Root (42) off consecutive deliveries.

The 26-year-old spinner, playing his sixth Twenty20 international, took another three wickets in his fourth over.

"We committed the cardinal sin of losing two in players in one over and the allowed India to build pressure. We weren't up to it at all. It's really disappointing," said Morgan.

"Take your hat off to India. They played well and put in a performance worthy of winning the series. We weren't good enough to win this series."

The defeat capped a miserable period in India for England, who lost the five-Test series 4-0 last year and went down 2-1 in both the subsequent one-day internationals and the Twenty20s this year.

England coach Trevor Bayliss acknowledged the team's inability to handle world-class spin, but insisted the visitors played "some pretty good cricket" at times during the ODI and Twenty20 series.

"We are certainly not world-class players of spin. We are mainly a young group making their way in international cricket," Bayliss told the BBC.

"Bit disappointing in the way we finished our series there, certainly doesn't reflect the type of cricket we've played here."

England are scheduled to tour West Indies for a three-match one-day international series next month ahead of hosting of the 50-over eight-team Champions Trophy in June.

India captain Mahendra Singh Dhoni wants more matches in the United States despite a chaotic Twenty20 clash against the West Indies on Sunday ending in a rain-hit no result.

Heavy rain forced the game at the Central Broward Regional Park to be abandoned with India well-placed on 15-0 off two overs in pursuit of a modest 144-run target.

The outcome completed a miserable day for the organisers who were forced to delay the start of the game by 40 minutes after technical problems caused a loss of television pictures.

West Indies, the world champions in the format, claimed the two-match series after winning the first game on Saturday by just one run.

Dhoni, whose side conceded the third-highest total of all time in the format of 245 in the opening clash, said he defintely sees a future for T20 cricket in America's crowded sports market.

"This is one place where we can come back and play cricket -- a triangular or four-nation series," Dhoni said at Sunday's presentation in comments carried by the cricinfo website.

"A tournament like that can give us more time to spend in the US. Yes, it will be a cramped schedule, but modern-day cricketers won't mind it.

"This is one place where spectators will come. The timing suits us. So it's a win-win situation. It's a good venue to continue cricket."

Carlos Brathwaite, leading the West Indies for the first time after the sacking of Darren Sammy, also looked forward to returning to Florida.

"For me as a young leader to lead the players is an exciting experience. We want to remain champions and entertain the West Indies crowd. Most definitely we would love to come back here again," he said.

West Indies struggled to 143 all out in their innings with slow bowler Amit Mishra claiming a career best 3-24.

But the Florida pitch -- and eventually the weather -- turned its back on the strokemakers on Sunday.

Saturday century-maker Evin Lewis, again standing in for the injured Chris Gayle, mustered just seven runs before he was caught at mid-off from the bowling of Mohammed Shami.

Fellow opener Johnson Charles looked set for another 50 but was dismissed seven runs short by recalled leg-break bowler Mishra, who enticed a chance to Ajinkya Rahane at long-on.

The bowlers continued to apply the brakes with Ravichandran Ashwin and Jasprit Bumrah getting rid of Lendl Simmons (19) and Marlon Samuels (5) respectively with the total on 76 by the 10th over.

Two overs and 22 runs later, the West Indies were six down with Ashwin having Kieron Pollard lbw for 13 and Bumrah clean bowling Andre Fletcher for three.

West Indies crawled past the 100-run mark in the 14th over; on Saturday, they were into three figures in the eighth.

Dwayne Bravo (three) tried to put his foot on the gas but his charge down the wicket was undone by a Mishra googly.

Andre Russell eked out 15 off 13 balls before he holed out off Bhuvneshwar Kumar with the score on 123.

Brathwaite (18) smashed a six and four off Mishra in the 18th over but the captain was bowled off the Indian's last ball of his impressive spell.

Shami mopped up Samuel Badree for one with two balls of the innings left.

In the mood for Samba!