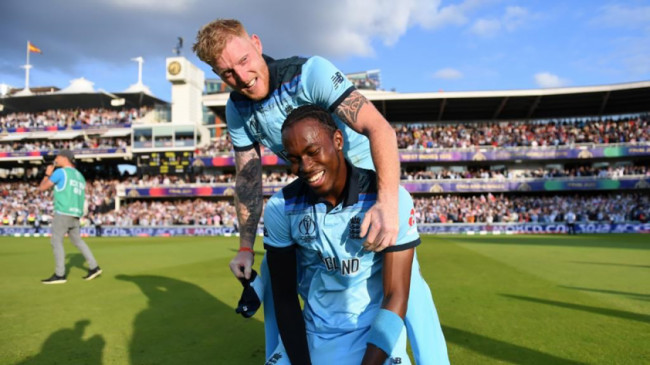 Arguably the best ODI match ever, the World Cup final between England and New Zealand at Lord’s yesterday went right down the wire before being decided on boundary-count as the match and the Super Over ended in ties. For two of England’s heroes -- Ben Stokes and Jofra Archer -- it was a moment to bask in glory. PHOTO: ICC
Sakeb Subhan Sakeb Subhan

‘The world’s greatest cricket celebration’ was the tagline for the 2019 World Cup in England and Wales. Yesterday, the catchy marketing slogan was proven true by two of the most deserving teams in champions England and runners-up New Zealand. The high drama that unfolded in the final at Lord’s Cricket Ground, cricket’s most revered venue showed cricket at its most exalted, containing a world of possibilities within its boundaries and seemingly endless scope for poetic justice, injustice and irony.

Ben Stokes was the last-over villain in England’s 2016 World Twenty20 final defeat against West Indies, when he was hit for four successive sixes by Carlos Brathwaite as England lost a final they should have won. Yesterday, he became the last-over hero but not without inflicting injustice, albeit unintentional, on New Zealand when he dived to protect his wicket and the throw from Martin Guptill deflected off his bat and went for a boundary that was not earned. Stokes, on his knees, held up his arms towards New Zealand’s fieldsmen to say that it was not intentional. Kane Williamson also had his arms stretched wide, as if to ask why that would happen when they were just about to win the match, and also knowing that it mattered not a hoot if it was intentional or not. Cricket allowed for it.

Guptill had been the hero when his direct hit ran out MS Dhoni at a crucial juncture of a hard-fought semifinal against India at Old Trafford just four days ago. His throw to run Stokes out, which would have left England needing eight runs off the last two balls to win with Stokes back in the hut, was also homing in on the stumps but because of an accident of positioning, brought the equation down to three from two and ended up costing his team the World Cup.

Less than half an hour later, in front of a thoroughly entranced Lord’s crowd, New Zealand were left needing three runs off two balls to win the Super Over and the World Cup. A fast ball from Archer only allowed Jimmy Neesham to get an inside edge for a single. It was Guptill again who would have to take two runs from one ball -- the same equation that Stokes dealt with a while ago and failed to convert to a win. An identical outcome played out, a run-out trying to complete a second run, but this time the despairing dive going against New Zealand. This time there was no uncertainty however, as England celebrated the run out, knowing that having hit more boundaries during the match they had won the tie-breaker to a tie-breaker. There was much that rhymed in that series of coincidences, but there was also a whiff of injustice in something as random as boundaries deciding the winner in a game of runs and wickets.

But there has to be a winner and there has to be a loser. Before that, those assembled at Lord’s yesterday saw a true battle between bat and ball as both sides scampered to save every run, run every hairy two, and absorb every ounce of pressure in delivering the win.

It is futile trying to explain the workings of cricket as seen yesterday, and better to focus on the obvious. Kane Williamson can say much about that.