‘We get down during partnerships’ 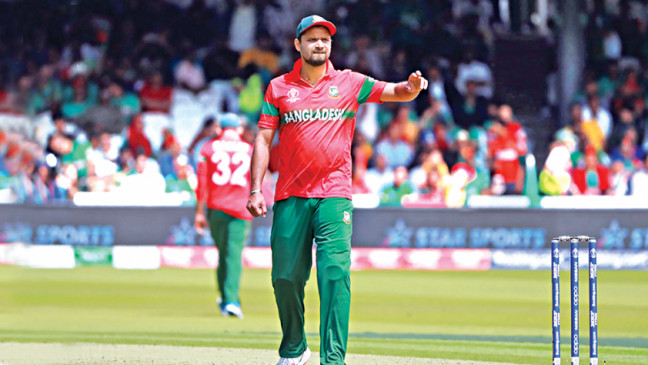 Bangladesh’s inspirational captain Mashrafe Bin Mortaza would have hoped for much more from his final World Cup match, but all of the Tigers’ flaws came to the fore as they fell to a 94-run defeat to Pakistan at Lord’s yesterday. PHOTO: BCB
Sakeb Subhan Sakeb Subhan

Although it was an academic match for Bangladesh, skipper Mashrafe Bin Mortaza admitted in so many words after the 94-run defeat to Pakistan in their last World Cup match that the result coloured how their campaign would be remembered.

"If we could finish the match on a good note, we could have said that luck has not been with us," the 35-year-old Mashrafe, appearing downcast after what was his last World Cup match, said in the post-match press conference. "We have been really good in a few things, but a few things have not been with us."

One of those few things that were not on the Tigers' side was their fielding. Having let go of opportunities in crucial moments during the matches they lost -- against New Zealand, England, Australia, India and Pakistan -- Mashrafe did not mince words when it came to their failings on the field.

"In some matches, fielding really cost us -- ground fielding especially. It helps the bowlers when fielders back you up," Mashrafe said. "Catches were dropped, it happens, but when it keeps happening questions will of course be asked.

"Fielding, it has been a concern all of my career. When there is a partnership, we get down," Mashrafe said. "This is the part that a player can change. I think we really need to improve fielding."

Getting down when the going got tough was a theme of Bangladesh's performance on the field. Although Pakistan would also have had little motivation to do well as they needed to bundle Bangladesh out for seven runs to progress to the semifinals, they stuck to their task and finished their World Cup proudly. Mashrafe thought that it was the teams' contrasting lead-ins to the last game that made the difference.

"It was not like we took the field not thinking of a win, but when the team knows that they are not in the semifinals, in the back of the mind you are a little upset. In these situations it is difficult for both teams. Pakistan were in good touch in the last few matches. Momentum was with them. In our last match it was confirmed that we were out of the World Cup."

Looking back at the World Cup, Mashrafe said that a seventh-placed finish was not bad, and that there were a few positives.

"If we won today, we could have gone to five. We had a chance to go to five till our last match," Mashrafe said. "If we won against India, we could have had a certain type of momentum. I wouldn't say that seven is a very bad place to be.

"I was worried about all three departments before the World Cup and I thought that we lagged behind in all three. After the World Cup I see that there is a big difference in bowling and an even bigger one in fielding," Mashrafe said when asked where Bangladesh lacked against the big teams. "But after the matches against Australia and India, I think we are in a similar position in batting."

The Bangladesh Cricket Board (BCB) yesterday announced a 15-member squad, featuring the uncapped right-arm pacer Hasan Mahmud, for the T20I series against Pakistan which will begin on January 24 in Lahore.

Mahmudullah Riyad, who led the Tigers during their three-match T20I series in India last November, will remain at the helm for the upcoming series.

And although the men in red and green will be without the services of stalwart Mushfiqur Rahim, who opted out due to security concerns, veteran batsman Tamim Iqbal is set to make his national return after having last played for Bangladesh during their three-match ODI series in Sri Lanka last July.

Tamim had turned down the following tour of India on personal grounds.

Although Taijul Islam, Arafat Sunny, Mosaddek Hossain and Abu Hider were all included in the T20 series against India, they were excluded for the Pakistan tour while Rubel Hossain, Najmul Hossain Shanto and Mahadi Hasan were recalled to the side.

The Tigers will leave for Lahore on January 22 following a three-day training camp, scheduled to begin today.

Shakib Al Hasan, who was banned by the ICC for failing to report corrupt approaches from a bookie, has wished the Bangladesh team success for their upcoming tour of Pakistan.

The Bangladesh team are set to depart for Pakistan today to play three T20Is from Jan 24 to Jan 27. Shakib Al Hasan attended a programme at The Daily Star premises today to announce his contract extension with Lifebuoy, where he wished the Tigers success for the upcoming series.

The Pakistan series had been entangled in security concerns and before both the BCB and the PCB agreed to a three-phase tour in order to make it easier for the Bangladesh players to test the waters of the tight security blanket that will be present in Pakistan.

"I hope that everyone travels safely and return after a good series with success for Bangladesh," Shakib said during the event.

Bangladesh will be missing the services of Mushfiqur Rahim for the tour but Shakib feels that the Tigers have a chance to get a good result.

"Sri Lanka recently won the T20 series 3-0 against Pakistan so we should get a good result too," he said.

Asked if missed playing cricket, Shakib said: "When you are involved with something, whether you like it or not, you will miss it when it's gone and it's normal. It's no different for me."

Bangladesh ODI captain Mashrafe Bin Mortaza returned to business as usual with the willow and leather following a short break from cricket but it was Mohammad Saifuddin who guided Abahani to a 14-run victory over Brothers Union with an allround performance in a Dhaka Premier League encounter at the Sher-e-Bangla National Stadium in Mirpur yesterday.

Apart from Saifuddin's match-winning effort, a five-wicket haul from Ziaur Rahman and hundreds from Anamul Haque and Yasir Ali were highlights of the day at three different venues.

Yasir could have the hero of the match but his fine unbeaten 112-ball 106-run innings went in vain due to a lack of support from other batsmen as Abahani rode on a good team effort to win their third match on the trot.

Abahani recovered from 95 for four to put up a 236 for six in their share of 50 overs, courtesy of Nazmul Hossain's 72-ball 44, captain Mosaddek Hossain's 95-ball 54, Saifuddin's 45-ball 59 and Mashrafe's unbeaten 15-ball 26.  Brothers also made a poor start by losing four wickets for 62 runs and eventually finished their 50-over quota on 222 for eight despite Yasir's effort. Mashrafe and Sabbir Rahman claimed two wickets each but Rubel Hossain and Mosaddek also did a good job with some economical bowling even though they remained wicketless.

In a low-scoring affair at the Khan Shaheb Osman Ali Stadium in Fatullah, Ziaur shone with the ball as his fifer and a four-wicket haul from Salauddin Sakil helped Sheikh Jamal Dhanmondi dismiss Shinepukur Cricket Club for 94 runs and secure a 12-run victory; their first success in three matches.

Earlier Shoriful Islam and Sabbir Hossain dictated the terms with the ball as Sheikh Jamal were bundled out for 106.

With there being much speculation surrounding Bangladesh skipper Mashrafe Bin Mortaza's future, there was some tension in his post-match press conference yesterday. He had already announced that this was to be his last World Cup, but there was an outside chance that the 35-year-old -- no stranger to impulsive decisions -- would make a surprise announcement in his last press appearance.

However, he doused all that with a straight-batted answer when asked what his future plans were after Bangladesh closed their World Cup campaign with a 94-run loss to Pakistan at Lord's yesterday.

"My future plan is obviously going home from here, and I will have a rethink," was the anticlimactic answer delivered with a straight face.

Bangladesh have a tour of Sri Lanka later this month, and much of the interest following the World Cup will be around whether Mashrafe is on the plane to Colombo.

Mohammad Ashraful, who was banned for five years for his involvement in match and spot-fixing in the BPL, today returned to the scene where it all started going bad for him as he is featuring in the opening fixture of the BPL for Chittagong Vikings. He was not shy in his first appearance after the ban as he became involved in a comical scene with none other than Bangladesh ODI captain and Rangpur Riders skipper Mashrafe Bin Mortaza -- a newly elected MP for Bangladesh.

The diminutive right-hander came to the crease at the fall of the first wicket to face the Rangpur skipper who had just gotten the wicket of Cameron Delport in the fourth delivery of the over. What followed can be termed as a dash and smash or perhaps a Mash and Ash coming together.

Ashraful played the Mashrafe delivery towards third man and then ran straight as an arrow towards the other end with the Rangpur skipper going back to his run-up mark unaware of what was happening behind him. Ashraful, hilariously so, proceeded to run straight at Mashrafe and barged into the Rangpur captain to general astonishment and cheers from the ground.

Mashrafe, not one to miss out on the odd bit of humour that BPL avails, welcomed Ashraful with a cheeky kick on the backside which the latter tried to evade. The two former teammates enjoyed a light moment in the very first match of this year's BPL.

Ashraful's tenure at the crease did not last long however as he fell to Shafiul Islam in the next over.

Earlier, Rangpur were bowled out for just 98 with Ravi Bopara's 44 enabling the defending champions to put on a fighting total on the board after they slumped to 7 for 35.