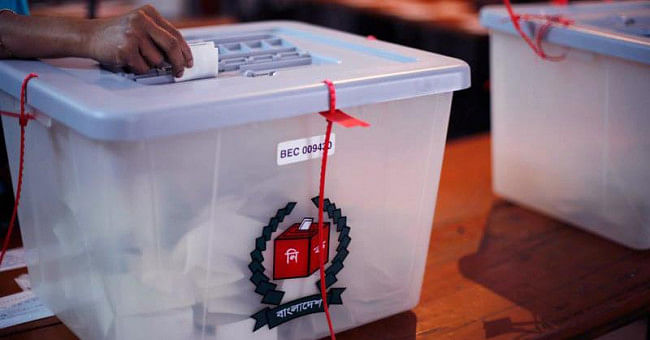 Re-balloting at three polling centres under Brahmanbaria-2 constituency, where voting was suspended during the December 30 election, will be held today.

Re-voting is necessary as the margin of votes between Sattar and Moyeenuddin is 10,159, less than the total votes at the three centres.

Leading Indian newspapers editorially commented today on the outcome of parliamentary elections in Bangladesh saying Prime Minister Sheikh Hasina's return to power is "good news" for relations with India, but cautioned against her government's "authoritarian" strait.

Hindustan Times termed Awami League's landslide victory in parliamentary polls as "stunning" and The Times of India described it as "massive" while The Hindu opined Hasina "remains immensely popular" on the back of a "formidable record of economic growth and social progress."

The editorial in Hindustan Times said "in the last decade of her rule, Ms Hasina has had a mixed track record. While Bangladesh's economy has surged ahead, her record on human rights leaves a lot to be desired."

"Even as Bangladesh is on the brink of shedding its tag of least developed country, the government has crushed all opposition forces in that country. Ms Hasina's regime has harassed journalists, arrested opposition leaders and remained passive to the killing of bloggers," it said adding "New Delhi would do well to quietly remind her from time to time to keep her authoritarian instincts in check."

The Times of India editorial said "it cannot be denied that Hasina remains a hugely popular and under her Bangladesh's economy has posted strong growth …and the country is poised to join the developing countries category by 2024."

It also said "Hasina and the Awami League have a secular vision for Bangladesh …Additionally, the Awami League dispensation has cracked down hard against Islamists and local terror cells. Plus, the ties between India and Bangladesh have soared under Hasina…"

Pointing out that "Hasina's return at the helm of Bangladesh should further aid New Delhi and Dhaka ties," the Times of India said "one of the issues the opposition campaigned on, justifiably, was the increasing authoritarian ways of the Awami League government. Hasina would do well to redress this quickly. Failing to do so would provide scope for the Islamists to stage a comeback."

The Hindu commented that the Awami League "set the agenda for the election and dominated the campaign. Still, the scale of the victory would have taken even her supporters by surprise."

"There was a crackdown on the opposition in the run-up to polling day. Pro-opposition websites were taken down, thousands of activists were jailed, and political violence was unleashed to target BNP members. The situation was so grave that even one of the election commissioners said there was no level playing field. …Her otherwise impressive record has been marred by her government's authoritarian character.

"The (election) victory is a chance for Ms. Hasina to mend her ways, to be more inclusive and run a government that respects the rule of law, the basic rights of citizens and institutional freedom," The Hindu said.

It added that "For India, Ms. Hasina's victory is good news. New Delhi and Dhaka have deepened economic, security and strategic ties under her leadership. This should continue, no matter what the general election outcome in India in 2019."

The editorial in The Economic Times said the Hasina government's "strong arm measures that give the discredited opposition the chance to cry foul were eminently avoidable."

It said "the shrinking political presence of the Bangladesh Nationalist Party, which backs Islamists, will ensure that the country becomes far less hospitable to Islamists."

The newspaper said Sheikh Hasina's electoral victory "is important for New Delhi in the context of countering China's influence in the region. India must continue to partner Bangladesh in its economic growth, encouraging Indian companies to invest and working together in climate change, terrorism, migration and energy."

BNP today blasted the ruling Awami League for celebrating its victory in the 11th parliamentary election; saying it was a mockery with the people.

They picked crores of money out of the pockets of the public to hold a so-called rally, he said at a press conference at BNP’s headquarters in Nayapaltan.

“Now, when we are recovering from the horrific news of Parul Begum for voting for the Sheaf of Paddy in Noakhali’s Subarnachar, we heard another such news of local Jubo League activists gang-raping a mother of three,” Rizvi said.

After a fake victory in the election, their leaders and activists have become reckless and indulged in diabolical oppression and repression, Rizvi said.

Expressing grave concern over such repressive acts, Rizvi said that no government can sustain in power without the people’s mandate.

The anti-graft watchdog also voiced concern as the election was "questionable and debatable" due to allegations of violations of code of conduct, use of force, and death of 19 people.

In a statement issued today, its Executive Director Dr Iftekharuzzaman said: "The set of violence and multifaceted violations of election code that has raised doubts over the election and its results must be investigated impartially.”

He said: "We demanded that level playing grounds be created for all stakeholders from the beginning. However, news of attacks, repression and lawsuits intended to harass the candidates and their supporters of a contending alliance as reported by the national and international media is an ominous sign for democracy."

"Such harassment allegedly continued even the night before and day of elections. The most worrying fact is that people might lose their confidence on the system of democracy."

He goes on saying: "The way the chief election commissioner tried to shrug off the allegations that the polling agents of an alliance is embarrassing and the concern has deepened whether the commission could effectively carry out its constitutional duty."

“This is a huge event in the history of Bangladesh as the voting to the 11th parliamentary election took place in a very free, fair and peaceful environment under a political government,” he told reporters at the EC Secretariat here on the outcomes of the election.

He said many local and foreign observers have expressed their satisfaction over the voting.

Helal said the Awami League-led Grand Alliance gained a massive victory in this election to run the government for a straight three terms.

He also informed the media that so far the results to some 298 constituencies out of 300 have been announced since the election to three centres at Brahmanbaria-2 has been withheld. “There’ll be re-voting in these three centres.”

The EC Secretary extended gratitude to all the political parties, including Awami League, for taking part in this election amid festivity.

He said the Commission was taking preparations over the last one year to hold the election in a successful way and in this process they prepared voters list, completed delimitation of 300 constituencies, appointed the returning officers and assistant returning officers after announcement of the polls schedule, and held meetings with political parties.

Helal Uddin said about 15 lakh polling officials and members of law enforcement agencies were engaged to help hold the election in a free and fair manner with the participation of some 39 political parties and 1,846 candidates.

This election was a huge event in national life except some sporadic incidents as the EC has stopped polling at 22 centres for sporadic clashes and incidents out of the overall number of around 40,000 centres, he said quoting Chief Election Commissioner KM Nurul Huda as saying.

About the EVM use in voting, the EC Secretary said EVMs were used in six constituencies and there were curiosity, interest and anxiety over the use of these machines.

“But, we’ve been able to successfully use the EVMs…we’ll use EVMs in the upcoming elections. We will consider on how to get the results from these EVMs much earlier in the future,” he added.

Helal Uddin said the Commission is yet to calculate the overall percentage of votes casted in this election, adding their next big task will be to publish the gazette notification of the election results.

“Thus it will hand over it to the Speaker of Parliament for taking next steps and proceedings.”

The EC Secretary congratulated the Awami League for gaining the overwhelming victory side by side thanked the other political parties to cooperate with the EC for holding this election successfully.