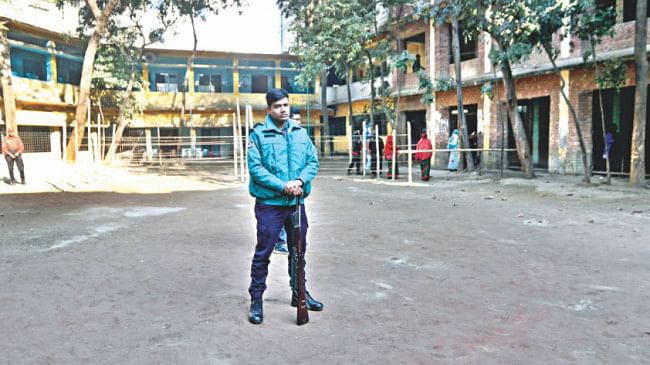 A policeman stands guard at Faridabad High School in Shyampur where voting started after more than a 40-minute delay for reasons unknown. Moreover, few voters were seen there when the photo was taken around 9:45am yesterday. Photo: Prabir Das
Star Report Star Report

The ruling party supporters were seen stuffing ballot boxes from 1:45pm to 2:15pm at Gulshan Model School and College in Dhaka yesterday.

They did it at booth no. 1 on the first floor while law enforcers and election officials were present, witnessed a correspondent of The Daily Star.

After seeing this at 1:45pm, the correspondent left the scene and returned again at 2:15pm. Al Amin, a sub-inspector who was blocking the entry, allowed him access without a camera. The police officer followed the reporter and signalled the youths stuffing the ballot boxes with a shout, “Go out... go out...”

Police on duty at Government Titumir College, which housed three centres, held back voters in long queues for hours saying the centres would be crowded otherwise.

They allowed only 10 voters at a time.

The voters in the queues said they were waiting for more than three hours at the college gate.

The correspondent entered the college at 3:15pm and found only a few voters inside with the polling booths empty.

Abul Hashem Md Farid, presiding officer of centre no. 85, said, “Voters' entry is controlled by police. What can I do?”

Noor-E-Azam, presiding officer of centre no. 86, echoed him.

However, many voters, tired and exhausted after hours of waiting, had already left. At this stage, the ruling party activists took control of the entrance to let their chosen people enter during the final minutes of voting.

At Block-D in Mirpur-12, our correspondent entered Al-Quran Academy around 10:00am and was immediately escorted by an SI. Asked why he was accompanying him, the SI replied, “Because I was asked to.”

When the correspondent reached booth No. 201, he found three people wearing badges of “boat” symbol there.

One of them quickly left the booth, while two others were seen stuffing the ballot boxes.

Long queues of around 1,000 voters were seen in front of Monipur School and College branch-3 under Dhaka-15. Many of the voters alleged that the booths of the centre were empty.

The main entrance to Morgan Girls School in the city remained shut since 11:30am with more than 100 voters waiting in the queue outside. One of the voters said at 1:30pm the gate remained closed for two hours.

A correspondent saw four women locked in an altercation with the armed police members at the gate as they were furious from hours of waiting.

As the correspondent wanted to enter the centre, police stopped him saying it was lunch time for polling officials. This further enraged the voters, who alleged that police even chased some of them away.

“Police chased us again and again. It seems we have come here to commit a crime,” said an aggrieved voter.

Around 60/70 voters were still waiting to cast their votes; they lost their patience around 4:00pm and started desperately knocking on the gate. Three police vehicles led by Narayanganj Sadar police Officer-in-Charge Kamrul Islam arrived on the scene immediately and dispersed them.

Contacted, the OC claimed they were outsiders and the law enforcers dispersed them to bring the situation under control.

The main entrance to Narayanganj Government Mahila College under Narayanganj-5 was found shut by police from inside around 2:30pm with 30-35 voters waiting outside.

The mini-gate was open under police guard, but the voters were not allowed to enter for more than half an hour.

At this stage, a voter came out and said there were almost no voters inside. “I went inside but was not allowed to cast my vote,” said the voter wishing anonymity.

The main entrance to Bar Academy High School in Narayanganj city was closed since 1:00pm for “lunch and prayer break”. Around 100 voters were waiting outside.

“I am still waiting to cast my vote,” said Kalpana Begum from the queue around 3:00pm.

Julfa Begum, a technician of a private hospital, said after waiting for two hours she returned without casting her vote.

The newly elected parliament members will be sworn in tomorrow and the new cabinet may take oath on Sunday.

A number of ministers informed this to journalists yesterday.

Talking to reporters during a dialogue with Bangladesh Secretariat Reporters Forum, Information Minister Hasanul Haq Inu said the newly elected MPs would be sworn in tomorrow.

The government would formally announce the date, he said at the media centre of his secretariat office.

The gazette on the MPs-elect was published yesterday.

The minister also said the Jatiya Party would be the main opposition in parliament. “The party can also take part in the new government if the prime minister offers them and they accept it.”

Inu said the Awami League-led Grand Alliance is the people's alliance and it has won the national election by a huge margin as it has tried to work for the people.

About the rejection of polls results by the BNP, Inu said the party did so as “part of its conspiracy”.

Seeking anonymity, a senior AL minister told The Daily Star that the new cabinet would be sworn in on Sunday.

However, AL General Secretary Obaidul Qauder yesterday said the process to form the new government was likely to be completed by January 10.

Quader, also the road transport and bridges minister, was talking to reporters after placing wreaths at the portrait of Bangabandhu in front of Bangabandhu Memorial Museum in the city's Dhanmondi.

“After the oath-taking of the new MPs, Prime Minister Sheikh Hasina will meet the president. The president will then request the prime minister to form the government.”

Asked about the Jatiya Oikyafront's decision not to take oath, Quader said, “The Election Commission will deal with the issue. Everything will be done according to the constitution. If any candidate fails to take oath, the Election Commission will take necessary steps in line with the constitution. A new schedule will be announced for holding a by-election in that constituency.”

The minister said he still believed the Oikyafront, led by the BNP, would not “disobey the people's verdict”.

“Earlier, they had made a mistake by boycotting the 2014 general election. Whether they are satisfied or dissatisfied [with the polls results], it is their party's matter. But I hope those who have been elected MPs this time will not show disrespect to the people's verdict by not taking oath.”

The minister said many democratic countries have started congratulating Prime Minister Sheikh Hasina. “If they [BNP] do not participate in the democratic process, it will not remain halted.”

Quader urged AL leaders, activists and supporters not to be revengeful to the opposition men and behave with them carefully.

In the December 30 parliamentary, the AL-led Grand Alliance won 288 seats against the BNP-led Oikyafront's seven.

The High Court will deliver its order today on a writ petition that challenged the legality of oath-taking of lawmakers elected in the December 30 national election.

Advocate Md Taherul Islam Tawhid filed the petition on January 14, praying to the HC to issue a rule asking the Election Commission and the government to explain why the oath taking should not be declared illegal.

The lawyer also sought necessary HC orders on the authorities concerned to block the new lawmakers from discharging their functions.

During the hearing, Taherul's lawyer Barrister AM Mahbub Uddin Khokon argued that the oath-taking violated articles 123(3) and 148(3) of the constitution of Bangladesh.

According to article 123(3)(a), parliamentary election shall be held within 90 days of dissolving the incumbent parliament.

“As the 11th national election was held without dissolving the 10th parliament, the polls have breached the constitution,” Barrister Khokon said.

Moreover, as per article 148(3) if a person is required to make an oath before entering an office, s/he shall be deemed to have entered office immediately after the oath.

Following article 148(3), the new lawmakers shall be deemed to have taken office right after they were sworn in, Khokon added.

However, the 10th national parliament which first sat on January 29, 2014 still exists and will continue till January 28 this year as per Article 72(3) of the constitution, he said, adding, “the oath-taking of the lawmakers is hence unconstitutional”.

On the other hand, Attorney General Mahbubey Alam opposed the writ petition saying that the petitioner lacks locus standi or sufficient interest in the matter in question.

“Advocate Tawhid is neither an elected lawmaker nor a candidate of the December 30 election,” the AG said, adding that there is no legal basis for the court to consider the petition.

A Supreme Court lawyer yesterday filed a writ petition with the High Court, challenging the oath-taking of lawmakers elected in the December 30 polls last year.

Earlier in the day, another HC bench of Justice Syed Refaat Ahmed and Justice Md Iqbal Kabir Lytton refused to permit Advocate Taherul to move the same petition before it, saying that the petition is “premature” as all the elected lawmakers are yet to take oath, Barrister Saqeb Mahbub, a lawyer for the petitioner, told The Daily Star.

He also said the writ petition might be filed and moved today before the bench led by Justice Moyeenul Islam Chowdhury.

Barrister AM Mahbub Uddin Khokon appeared for the petitioner seeking permission from the HC benches to file and move the petition before the court.

Citing the petition, Barrister Shanjid Siddique, another lawyer for the petitioner, told this newspaper that oath-taking of the persons elected in 11th national polls violated articles 123(3) and 148(3) of the constitution, as the tenure of the 10th parliament is yet to expire.

BNP today blasted the ruling Awami League for celebrating its victory in the 11th parliamentary election; saying it was a mockery with the people.

They picked crores of money out of the pockets of the public to hold a so-called rally, he said at a press conference at BNP’s headquarters in Nayapaltan.

“Now, when we are recovering from the horrific news of Parul Begum for voting for the Sheaf of Paddy in Noakhali’s Subarnachar, we heard another such news of local Jubo League activists gang-raping a mother of three,” Rizvi said.

After a fake victory in the election, their leaders and activists have become reckless and indulged in diabolical oppression and repression, Rizvi said.

Expressing grave concern over such repressive acts, Rizvi said that no government can sustain in power without the people’s mandate.