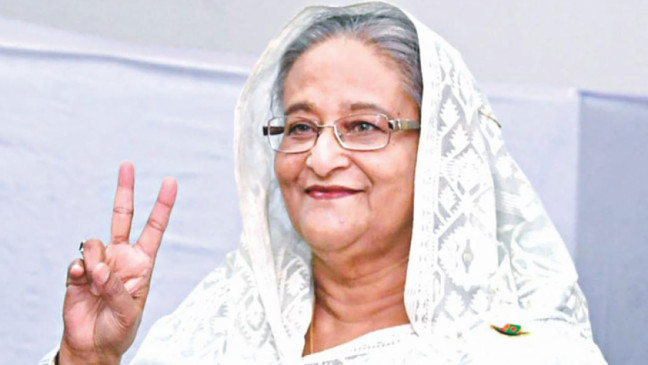 Leading Indian newspapers editorially commented today on the outcome of parliamentary elections in Bangladesh saying Prime Minister Sheikh Hasina's return to power is "good news" for relations with India, but cautioned against her government's "authoritarian" strait.

Hindustan Times termed Awami League's landslide victory in parliamentary polls as "stunning" and The Times of India described it as "massive" while The Hindu opined Hasina "remains immensely popular" on the back of a "formidable record of economic growth and social progress."

The editorial in Hindustan Times said "in the last decade of her rule, Ms Hasina has had a mixed track record. While Bangladesh's economy has surged ahead, her record on human rights leaves a lot to be desired."

"Even as Bangladesh is on the brink of shedding its tag of least developed country, the government has crushed all opposition forces in that country. Ms Hasina's regime has harassed journalists, arrested opposition leaders and remained passive to the killing of bloggers," it said adding "New Delhi would do well to quietly remind her from time to time to keep her authoritarian instincts in check."

The Times of India editorial said "it cannot be denied that Hasina remains a hugely popular and under her Bangladesh's economy has posted strong growth …and the country is poised to join the developing countries category by 2024."

It also said "Hasina and the Awami League have a secular vision for Bangladesh …Additionally, the Awami League dispensation has cracked down hard against Islamists and local terror cells. Plus, the ties between India and Bangladesh have soared under Hasina…"

Pointing out that "Hasina's return at the helm of Bangladesh should further aid New Delhi and Dhaka ties," the Times of India said "one of the issues the opposition campaigned on, justifiably, was the increasing authoritarian ways of the Awami League government. Hasina would do well to redress this quickly. Failing to do so would provide scope for the Islamists to stage a comeback."

The Hindu commented that the Awami League "set the agenda for the election and dominated the campaign. Still, the scale of the victory would have taken even her supporters by surprise."

"There was a crackdown on the opposition in the run-up to polling day. Pro-opposition websites were taken down, thousands of activists were jailed, and political violence was unleashed to target BNP members. The situation was so grave that even one of the election commissioners said there was no level playing field. …Her otherwise impressive record has been marred by her government's authoritarian character.

"The (election) victory is a chance for Ms. Hasina to mend her ways, to be more inclusive and run a government that respects the rule of law, the basic rights of citizens and institutional freedom," The Hindu said.

It added that "For India, Ms. Hasina's victory is good news. New Delhi and Dhaka have deepened economic, security and strategic ties under her leadership. This should continue, no matter what the general election outcome in India in 2019."

The editorial in The Economic Times said the Hasina government's "strong arm measures that give the discredited opposition the chance to cry foul were eminently avoidable."

It said "the shrinking political presence of the Bangladesh Nationalist Party, which backs Islamists, will ensure that the country becomes far less hospitable to Islamists."

The newspaper said Sheikh Hasina's electoral victory "is important for New Delhi in the context of countering China's influence in the region. India must continue to partner Bangladesh in its economic growth, encouraging Indian companies to invest and working together in climate change, terrorism, migration and energy."

“I still think that they (Oikyafront) would not dishonour the people’s verdict,” Quader made the call while addressing a press conference at AL President Sheikh Hasina’s Dhanmondi political office in Dhaka this afternoon.

Claiming that BNP made a mistake by not taking part in the January 5, 2014 national election, Quader suggested the Oikyafront leaders not to recur the similar mistake by staying aside from the oath-taking.

BNP yesterday hinted that their leaders elected in the polls will not take oath as they have already rejected the results, alleging mass irregularities including ballot stuffing and ouster of their polling agents from voting centres.

The Oikyafront yesterday in its formal reaction over the election announced that they would submit memorandum to the Election Commission on Thursday and announce next course of action programme to press home their demand.

Responding to a query in this regard, Quader, also road transport and bridges minister, said BNP does not have any preparation to wage a movement in the country.

“Did you (Journalist) see their (BNP leaders) faces yesterday how nerves and frustrated they were? They have lost their moral strength, how their workers can be rejuvenated by them?” he said.

Prime Minister Sheikh Hasina today called upon all, including the leaders and activists of Awami League and its associate bodies, to plant at least three saplings to make Bangladesh a much greener country.

The government wants to ensure overall economic development of the country while protecting its environment and surroundings, Hasina said.

Hoping to see a livelier and much better environment in the country, she mentioned that the government is implementing various programmes to this end.

The Prime Minister said forestation in Bangladesh has gone up to 22 percent from a mere 7 percent due to massive afforestation across the country under her governance.

Hasina said such steps will help improve the country's environment. Alongside expanding afforestation, this is how Bangladesh will be able to set an example in the world.

She requested the leaders, workers, and well-wishers of Awami League and its associate bodies as well as those who believe in Bangabandhu's ideology to plant at least one fruit, one wood, and one medicinal sapling.

Once constructed, the dedicated dual-gauge double-track railway bridge over the Jamuna River, which will be built some 300 metres upstream of the Bangabandhu Bridge that has a single rail line, would be the largest dedicated rail bridge in the country.

The main bridge will be constructed in two phases. Two separate agreements have already been signed with Obayashi-TOA-JFE, Japan and IHI-SMCC JV, Japan for eastern and western parts of civil works respectively.

As per the agreements, land was handed over to both contractors in July this year.

The project is scheduled to be completed by 2025.

“Repression on children will not be tolerated anymore. People involved in killing and torturing children must have to face the toughest punishment,” she said, addressing a function marking the birthday of Sheikh Russell, youngest son of Father of the Nation Bangabandhu Sheikh Mujibur Rahman.

The premier said, “People have been encouraged in killing and torture of the children since August 15 in 1975 when not only the President, but also the children and women were killed. But they were not given punishment at that time.”

“Instead of punishing them, a law was enacted to stop the trail for the heinous killings, rather the killers were rewarded. They even didn’t allow us to file any case in this regard,” she added.

Describing the recent killing of a child reportedly by his father as the outcome of a perverted mentality, she said, “Such a killing might not take place, if the trial of the killings of women and children were held at that time.”

The premier said that her government has been working to ensure beautiful life for each of the children so that none of them has to face the same fate of Sheikh Russell.

Nothing that Father of the Nation Bangabandhu Sheikh Mujibur Rahman had enacted Children Rights Act in 1974 for protecting the rights of children, she said, “We have formulated the National Children Policy in 2011 and taken measures to protect children’s rights and given special attention so that children can get the scopes for education, sports, physical and cultural exercises.”

Prime Minister Sheikh Hasina will address the nation this evening on the occasion of Victory Day.

Her speech will be aired by Bangladesh Television, Bangladesh Betar as well as private TV channels and radio stations.