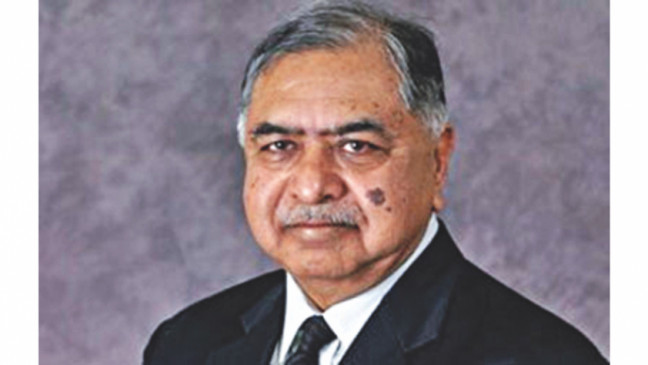 The Jatiya Oikyafront has urged the international community to take notice of the prevailing electoral atmosphere in Bangladesh where opposition candidates are being frequently attacked.

The opposition alliance told foreign diplomats in Dhaka that at least 70 opposition candidates could not campaign in their constituencies for the December 30 polls.

It handed out a statement to the diplomats at a view-exchange meeting with them at a city hotel yesterday.

Oikyafront leader Dr Kamal Hossain briefed the envoys about the overall situation in the country ahead of the election.

Organised by the alliance, the meeting was attended by ambassadors, high commissioners and representatives of nearly two dozen foreign missions, including that of the USA, India, China, Germany, Japan, Australia and Pakistan.

Dr Kamal, also president of the Gonoforum, told them that around 21,000 opposition leaders and activists were arrested since the announcement of the election schedule, meeting sources told this correspondent.

Following the 90-minute meeting, Kamal told journalists that the observations of the diplomats and what the combine conveyed to them were very similar.

Alleging that police are “abnormally” active, the eminent jurist said, “They are arresting people without any reason. The government is creating a fearful situation. It wants to keep the opposition parties away from the polls.”

In reply to a query, US Ambassador Earl R Miller told journalists that he hoped the EC would carry out its responsibilities properly.

About electoral violence, the envoy said all parties must avoid violence to maintain a congenial electoral atmosphere.

The combine's statement said, “The current spate of violence that has been launched constitutes another step on the direction of manacling the opposition and tightening the noose of exclusion.

“There is dire danger that all opposition candidates will be targeted one by one either through character vilification, fake news or outright intimidation, even injury. And it appears that the politicised police have taken up the role.”

It further reads, “It is for the international community to take cognisance of a situation where democracy is being derailed by an authoritarian government. At stake is the inalienable right of the people of Bangladesh to franchise and to choose their own representative.”

Pointing out that Oikyafront candidate Reza Kibria left his constituency on December 16 due to insecurity, the alliance leaders told the diplomats that at least 70 opposition candidates could not run polls campaigns. Some of them even could not go to their constituencies fearing attacks.

Some candidates could somehow reach their areas. But they failed to contact voters as their houses were surrounded by “the goons of the ruling party”, said the statement.

It alleged that the entire electoral machinery, including administration, police and magistracy, has been totally politicised by the government.

The alliance said the road to the election is pitted with “serious obstacles, threats, intimidation, and violent attacks on motorcades”.

“These are not stray incidents but controlled and premeditated actions designed to systematically exclude opposition leaders and candidates by [causing] injury and even death,” it said, giving accounts of recent incidents of electoral violence.

While some may consider this election as inclusive and participatory, the electioneering is marred by violence against the opposition, it mentioned.

Claiming that there is no congenial election atmosphere in the country, the combine alleged that ruling party men attacked opposition candidates but police remained silent.

“What a ridiculous lamentation, the chief election commissioner expressed when he finds no obstacle for opposition candidates to run their campaigns. Then it is assumed what kind of election he is going to deliver to the nation!”

Oikyafront leaders provided the diplomats with copies of the manifestos of the combine and the BNP.

Reflecting on it today, the party's Secretary General Mashiur Rahman Ranga said: “The party expected to win more than 22 seats in the election”.

However, he said, “Our party is now stronger than before”.

“We will decide tomorrow whether we will remain as an opposition in the parliament,” he said; adding “the joint meeting will be held with the newly elected lawmakers and standing committee members at 11:00am tomorrow”.

Taiwan is a part of China and no one can change that, Chinese Defense Minister Wei Fenghe said on Wednesday during a rare phone call with U.S. Defense Secretary Lloyd Austin, according to a statement from Beijing.

"If the Taiwan issue were not handled properly, it would have a damaging impact on Sino-U.S. relations," Wei added, according to statement published by the defence ministry.

The bodies of 46 dead migrants were discovered inside a tractor-trailer on Monday in San Antonio, Texas, city officials said, in one of the most deadly recent incidents of human smuggling along the US-Mexico border.

A San Antonio Fire Department official said they found "stacks of bodies" and no signs of water in the truck, which was found next to railroad tracks in a remote area on the city's southern outskirts.

Sixteen other people found inside the trailer were transported to hospitals for heat stroke and exhaustion, including four minors, but no children were among the dead, the department said.

"The patients that we saw were hot to the touch, they were suffering from heat stroke, exhaustion," San Antonio Fire Chief Charles Hood told a news conference. "It was a refrigerated tractor-trailer but there was no visible working A/C unit on that rig."

Temperatures in San Antonio, which is about 160 miles (250 km) from the Mexican border, swelled to a high of 103 degrees Fahrenheit (39.4 degrees Celsius) on Monday with high humidity.

The city's Police Chief William McManus said a person who works in a nearby building heard a cry for help and came out to investigate. The worker found the trailer doors partially opened and looked inside and found a number of dead bodies.

McManus said this was the largest incident of its kind in the city and said three people were in custody following the incident, though their involvement is not yet clear.

A spokesperson for US Immigration and Customs Enforcement (ICE) said that its Homeland Security Investigations division was investigating "an alleged human smuggling event" in coordination with local police.

The deaths once again highlight the challenge of controlling migrant crossings at the US-Mexico border, which have reached record highs.

The issue has proven difficult for US President Joe Biden, a Democrat who came into office in January 2021 pledging to reverse some of the hardline immigration policies of his Republican predecessor Donald Trump. Republicans have criticized Biden's border strategy ahead of the midterm congressional elections in November.

Mexico's Foreign Minister Marcelo Ebrard called the suffocation of the migrants in the truck the "tragedy in Texas" on Twitter and said consular officials would go to the hospitals where victims had been taken to help "however possible."

A spokesman for the Honduran foreign ministry told Reuters the country's consulates in Houston and Dallas would be investigating the incident. Ebrard said two Guatemalans were hospitalized and Guatemala's foreign ministry said on Twitter that consular officials were going to the hospital "to verify if there are two Guatemalan minors there and what condition they are in."

The I-35 highway near where the truck was found runs through San Antonio from the Mexican border and is a popular smuggling corridor because of the large volume of truck traffic, according to Jack Staton, a former senior official with ICE's investigative unit who retired in December.

In July 2017, 10 migrants died after being transported in a tractor-trailer that was discovered by San Antonio police in a Wal-Mart parking lot. The driver, James Matthew Bradley, Jr., was sentenced the following year to life in prison for his role in the smuggling operation.

Staton said migrants have regularly been intercepted in the area since the 2017 incident. "It was only a matter of time before a tragedy like this was going to happen again," he said.

A man who was naked but for a green jacket shot and killed at least four people and wounded at least three others at a Waffle House restaurant near Nashville, Tennessee early today, authorities said.

The gunman, armed with what was described as an AR-15 style assault rifle, walked into therestaurant in Antioch, in suburban Nashville, shortly before 3:30am (0830 GMT).

Travis Reinking, 29, of Morton, Illinois, is shown in this undated photo obtained April 22, 2018. Reinking is wanted as a person of interest by police after a fatal shooting at a Waffle House restaurant near Nashville, Tennessee, US, April 22, 2018. Photo: Metro Nashville Police Department/Handout via Reuters

The man opened fire on the patrons, the Metro Nashville Police said in a statement on Twitter, adding that "A patron wrestled away the gunman's rifle."

The gunman's vehicle was registered to Travis Reinking, 29, of Morton, Illinois, who police identified as a person of interest in the shooting.

One of the injured died at Vanderbilt University Medical Center, said hospital spokeswoman Jennifer Wetzel. Two others still at the hospital are in critical but stable condition, she said.

It was not immediately known where the fourth person was being treated.

Police told CNN the man shed his jacket before fleeing on foot. A shirtless man wearing pants who was believed to be Reinking was spotted in woods near the restaurant, police said.

Police were searching for the man early Sunday and it was unclear if he had another weapon. Local media reported that a second shooting nearby might be connected to this incident.

The public was cautioned that the man is to be considered still armed and extremely dangerous.