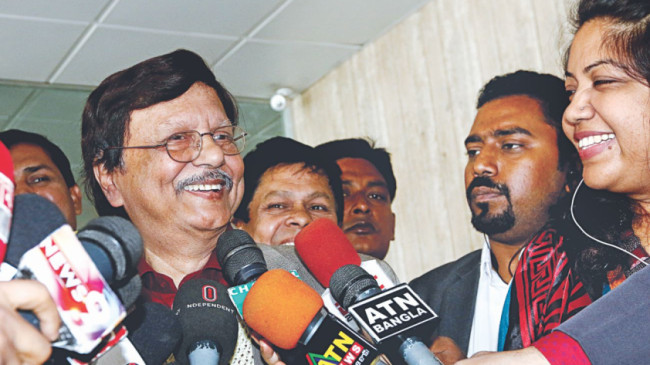 The EC yesterday held appeals hearings of 150 aspirants. Their nominations had been rejected by the returning officers concerned on December 2.

Gonoforum leader Reza Kibria's nomination for Habiganj-1 had been rejected for his failure to pay Tk 5,500 credit card fee. The returning officer concerned rejected Rana's nomination because he did not pay Tk 4,149 he owed in electricity bill.

After the EC allowed him to run following his appeal hearing yesterday, Rana told the media that he had paid the bill. “I had confidence in the Election Commission,” said the candidate for Barishal-2.

The Daily Star could not reach economist Reza for his comments.

There were 21 BNP leaders among the appeal winners yesterday.

Hawlader's lawyer Abdul Baset Majumder said, “My client is not a loan defaulter … We will take the matter before the High Court for justice.”

Hawlader's fall from the JP chief's grace came a day after his nomination was rejected by the returning officer concerned for default of loan.

Party insiders claimed that Ershad was unhappy with Hawlader due to allegations of “nomination business” against him.

In the first two days of appeals hearings, 158 appellants have been allowed to run for parliament, 141 were denied, and the cases of 11 have been kept pending.

As many as 3,065 nominations were submitted and the ROs rejected 786 of them during scrutiny on December 2.

A total of 543 appeals were filed against the ROs' rejections.

EC Secretary Helal Uddin Ahmed yesterday told journalists that some appeals were kept pending and those would be heard today.

Today, the EC is scheduled to hear 244 appeals, including those of BNP Chairperson Khaleda Zia.

Candidates who had their hearings completed yesterday did not get the certified copies of the EC order.

Many candidates and their representatives were seen waiting for the copies at the EC yesterday.

EC Joint Secretary Selim Mia told The Daily Star, “We, including our commissioners, were busy at appeals hearing. That's why we could not issue the certified copies.”

He, along with his wife Hameeda Hossain, is scheduled to land at Hazrat Shahjalal International Airport at around 12:50am.

He will be landing in a Thai Airways flight, Gonoforum central leader Rafiqul Islam Pathik confirmed The Daily Star.

Chief Election Commissioner Kazi Habibul Awal said if he had been made the CEC of New Zealand or Britain, he could have finished the election by sitting on a chair sipping tea.

He said this while inaugurating the voters' list update programme-2022 at Savar in Dhaka today (May 20, 2022), reports our local correspondent.

"I told my colleagues that if I were the Chief Election Commissioner of New Zealand or Britain, I could have finished the election by sitting on a chair and sipping tea," he said.

"In many countries of the world, elections/voting rights are exercised, as you know, and I also know that no violence happened there. Everyone stands in queues and everyone goes and exercises their rights to vote," he added.

"I didn't have any kind of stress, and would not suffer from high blood pressure. But the situation in Bangladesh makes us stressed during the elections. We have to be careful," said the CEC.

"The Election Commission alone can never make an election a success. But here those who are employees of the Republic, such as police administration, and district administration have to play a very important role during the elections," he also said.

"Yesterday I read a report of violence during elections in a newspaper. We want competition and a participatory election. But sometimes violence takes place in the vote. Chase and counter chases happened. A writer said that this is not our election crisis, it is our cultural crisis," he went on saying.

"How our culture has developed that we have to commit occurrence during elections. In many cases, this makes us sad. We need to get out of this exercise and maybe it will take some time," he added.

Md Humayun Kabir Khandker, EC secretary, also spoke at the event and called upon people, local government representatives, and administration to come forward for the cooperation of the staff engaged in the updating process of the voters' list.

BNP today alleged that the Election Commission (EC) is not allowing army personnel in discharging their duties to improve the law and order situation.

“The Election Commission is not allowing the army personnel to work independently,” BNP Senior Joint Secretary General Rizvi Ahmed said while addressing a press conference at the party’s Nayapaltan central office in Dhaka.

Citing several instances of attack on BNP candidates, Rizvi alleged, “All the incidents are taking place under the supervision of the prime minister and the chief election commissioner.”

Rizvi also blasted Awami League President Sheikh Hasina for her comment that the opposition quarter may unleash subversive activities ahead of the election.

“It is well-known to all that AL is a production house of elevated lies,” the BNP leader said.

Rivzi said members of different law enforcement agencies along with the ruling party men have created a terrifying situation by carrying out attacks on the BNP leaders and activists across the country.

The ruling party cadres with the help of police yesterday carried out attacks on BNP candidates and their activists and drove their poling agents, workers and supporters out of their own areas, he said.

Rizvi, also spokesperson of BNP, claimed that around 10,833 leaders and activists of the party were detained since the announcement of the polls schedule on November 8.

Alongside, the ruling party activists carried out around 2,896 attacks on BNP men that left nine people dead, the BNP leader claimed.

Despite this, the countrymen have united in favour of the “Sheaf of Paddy” symbol by forming resistances at different places ahead of the election, he added.

Sheikh Hasina yesterday said that the opposition BNP appeared to have sensed their defeat in the December 30 elections which could lead them to sabotage the polls.

“Remain careful about any subversive activity of BNP and their cohorts,” Sheikh Hasina said, wrapping up the election campaign for her Awami League and the ruling party-led Grand Alliance as she addressed four election rallies outside through video conferencing.

Apart from this, an Awami League delegation on the same day handed over a written complaint to the Election Commission (EC) alleging that the BNP-Jamaat alliance was engaged in conspiracies over the Sunday's election to unleash anarchy and violence across the country today.

Gonoforum's another MP-elect Mokabbir Khan (Sylhet-2) is going to be sworn in tomorrow, following the footstep of party MP Sultan Mohammad Mansur.

In response to a letter sent by Mokabbir to Speaker Dr Shirin Sharmin Chaudhury today, an arrangement has been made to administrate oath to him at 12:00pm on Tuesday at the Jatiya Sangsad Bhaban.

In the letter sent in a letterhead of Gono Forum, the MP-elect said, "Me and my party has decided to take oath either on April 2 or 3."

Talking to UNB, Mokabbir said he sent the letter as per the decision of their party's presidium members. "The party leaders and its president Dr Kamal Hossain are aware of it."

Replying to a question, he also said Dr Kamal gave him the green signal to take oath. "Besides, the people of my constituency also requested me to be sworn in."

On March 7, Sultan Mohammad Mansur (Moulvibazar-2) took oath as a member of the 11th Parliament.

Earlier on March 3, two Gonoforum MPs-elect sent separate letters to the Speaker requesting her to arrange their oath-taking ceremony on historic March 7.

However, Mokabbir Khan did not take oath on that day.

BNP along with Gonoforum and some other parties joined the December-30 election in alliance under the banner of Jatiya Oikyafront. BNP bagged six seats while Gonoforum two in the election.

The alliance turned down the election results bringing the allegation of 'massive vote robbery' and decided not to join parliament.

Gonoforum expelled Sultan Mansur hours after he had joined parliament.