Re-polling in 3 centres of B'baria-2 on January 9 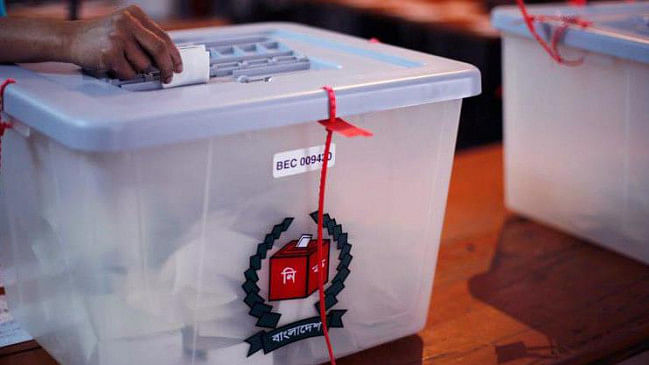 The Election Commission yesterday decided to hold re-elections in three polling centres of Brahmanbaria-2 on January 9, as the polls there were suspended on Sunday.

In a notice, signed by EC Joint Secretary Forhad Ahammad Khan, the commission said that elections in three of the 76 polling centres were suspended following deterioration of law and order during Sunday's national election.

During voting hours on Sunday, supporters of two candidates were locked in a heated argument after which voting was suspended in the three centres. The incident occurred around 11:00am.

EC officials said that the BNP candidate Abdus Sattar Bhuiyan was leading the polls in the constituency with 82,723 votes while independent candidate Moyeen Uddin bagged 72,564 votes.

Ruling Awami League activists in Cumilla today flexed their muscles to release a party man from the custody of local police just two days ahead of election.

Over a hundred men of the party surrounded a local police station to free one of the supporters after the latter was detained, our local correspondent reports.

Awami League activist Syed Raihan was detained around 2:00pm by Cumilla Kotwali Police for reasons not ascertained, according to local police sources.

AKM Bahauddin, current lawmaker from Awami League for Cumilla-6 and a candidate of the seat in the election, went to the police station hearing the news.

Bahauddin went inside and talked with the officer-in-charge, and after a short while, Raihan was released without further ado.

Asked about it, Abu Salam Mia, officer-in-charge of the police station, told The Daily Star: “The detention was made out of a misunderstanding. He did nothing wrong.”

Seeking anonymity, some local Awami League activists told The Daily Star that Raihan was a member of a rival group of the party, but switched sides recently to work for MP Bahauddin.

Tariqur Rahman Jewel, general secretary of Cumilla Sadar Awami League, told The Daily Star: “Since there were no cases against him, our lawmaker went to the police station to get him out so that he is not harassed without reason.”

BNP candidates of Dhaka-4 and Dhaka-19 constituencies are fearing further attacks on their campaigns and activists.

They both complained of inaction from the authorities despite repeated complaints, they claimed at separate press conferences today.

Dhaka-4 candidate Alhaj Salauddin Ahmed held a press conference in his Shyampur residence, alleging of police threats to his supporters.

Expressing fear for his life and family, he alleged law enforcers are continuing drives to arrest and harass the opposition leaders and activists.

“Several times I have lodged complaints to the Election Commission in this regard but did not get any response,” he said.

He claimed arrests of at least 19 top BNP activists in the locality and attack and vandalism of BNP’s campaign offices in the area.

Fearing further vandalism, he said he has halted the election campaign for a few days. He too alleged of authorities’ inaction despite repeated complaints.

Expressing concern over alleged harassment, intimidation and electoral irregularities in the December 30 election, Norway has called for a transparent investigation into the allegations.

“Norway is concerned about credible reports of harassment and intimidation, as well as the presence of serious obstacles to a level playing field throughout the election process. We deplore the violence and tragic loss of life during the campaigning period and on election day,” said Marianne Hagen, state secretary at foreign affairs ministry.

“Given the significant number of claims of irregularities, it is essential that these are investigated fully and transparently by the proper authorities.”

In a statement on Thursday, she said Norway commends the many Bangladeshis who exercised their democratic right to vote on election day, and welcomes the opposition's decision to contest the election for the first time in 10 years.

Hagen added, “Our countries' good and longstanding relations are based on mutual respect and the pursuit of common interests.

“Norway will continue to work with the government and the opposition, as well as other stakeholders, to further advance the democratic and economic development of Bangladesh.”

BNP candidate Abdus Sattar Bhuiyan has been elected in Brahmanbaria-2 following yesterday's re-polling in three centres of the constituency.

His closest rival Moyeen Uddin, an independent, bagged a total of 75,419.

Sattar had already been leading the polls with 82,723 votes, said Election Commission officials.

The number of constituents under the centres was 10,572. Only 4,300 voted yesterday, said Returning Officer Hayat-Ud-Dwollah Khan as he announced the unofficial result.

There were a total 132 polling centres in Brahmanbaria-2.

Including this, eight lawmakers have been elected from the BNP-led Jatiya Oikyafront. The Awami League-led alliance won 288 seats.