Alleges Oikyafront as its seven MPs-elect refuse to take oath 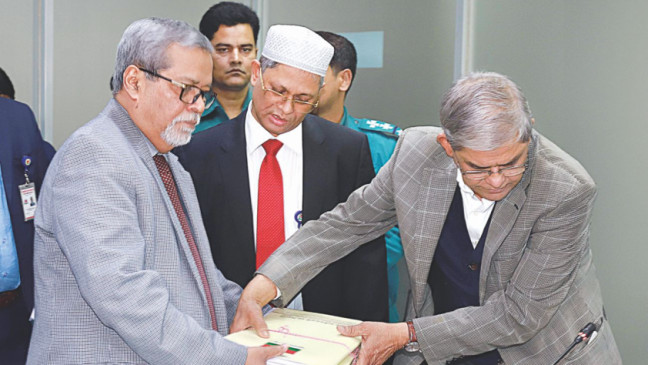 Seven MPs-elect of Jatiya Oikyafront yesterday refrained from taking oath and the alliance claimed that ruling party men had stuffed the boxes with “30 to 60” percent of the ballots the night before the polls.

In the memorandum, the alliance also alleged that the administration was blatantly used against the people. It was a "breach of trust and the voters were deceived”, the Oikyafront said.

"This election is a cruel mockery of the people,” Fakhrul, also the BNP secretary general, told reporters afterwards.

"There is no question of taking oath as we have rejected the results,” he said replying to a query about whether the seven lawmakers-elect would take oath.

The alliance yesterday submitted some “evidence of election-related anomalies and undue influence since the announcement of election schedule”.

"We've submitted evidence to the commission. We hope they [commission] will review those,” Fakhrul said. "The nation was pushed into darkness through this cruel drama in the name of election.”

The AL rowdies with the help of law enforcers forced all shops to close across the country before 9:00pm the night before the election to create a ghostly atmosphere, the memorandum said.

After stuffing the ballot boxes at night, they cast false votes during election day and voters were forced to vote for boat, it said.

It said ballot papers in almost all polling centres ran out by noon and in many cases polling officials took lunch breaks.

The night before the polls, AL men terrorised voters and threatened them with dire consequences if they went to vote, the Oikyafront claimed, adding that the AL men showed off their muscle power at intersections to intimidate voters.

“Law enforcers did not take any steps when help was sought.”

Counting of votes began before 4:00pm at many places, the Oikyafront said, adding that the EC's role was mysterious.

It said the EC and the courts cancelled candidature of 18 Oikyafront candidates and at least 16 other candidates were arrested.

There was no change in the civil and police administration. Judicial and executive magistrates were made inactive, it claimed.

“The media and the social media were controlled and the army was made inactive,” it said.

The EC must take the responsibilities of depriving the people of the country from exercising their right to vote, it said.

The Election Commission today withheld the by-elections to Gaibandha-5 constituency due to "malpractice".

Gaibandha-5 by-polls out of control: CEC

The decision came following the voting postponement at 51 polling centres.

Former chief election commissioners KM Nurul Huda and ATM Shamsul Huda today said participation of all political parties is a must for an "acceptable" election.

They were speaking at a discussion organised by Election Commission where former CECs and election commissioners expressed their views over the upcoming parliamentary election, based on their experience.

They also discussed the next course of action ahead of the national election.

Former CEC Nurul Huda said, "I believe that participation of all parties is required in the elections.  I'll win, I must win – we have to shed this mentality."

He added: "There is no need to deploy army for the elections."

Former CEC Shamsul Huda said, "If all parties don't participate, election will not be acceptable. How to bring all the parties to the polls depends on your (EC) ability to convince them."

"A political party cannot stay out of elections for long in a democratic country. We have to create that environment," he said.

"Let there be a truly-elected government through fair elections in our country. Let's cancel use of muscle power," he added.

Another former CEC, Justice Abdur Rauf, said, "If you keep things as is and do not dare to make any change, then set up one polling station for every 500 people. This will reduce the voting hours and voting will end between 8am and 12pm. You can complete counting of votes in the day time. The worst thing is that the counting of votes starts in the evening. And then we 'see jinns and ghosts' and everything else."

“The revolution of vote will be against the communal and evil forces,” Quader, also the minister for Road Transport and Bridges, said while inspecting repair works on the Feni-Noakhali-Laxmipur road in Jaylaskaer area of Daganbhuiyan upazila in Feni.

Expressing optimism that the election will be held in a free, fair and festive manner, he said the countrymen have been united in favour of “boat” and will engage in a vote revolution against the communal, evil forces that resort to terrorism and corruption.

“Those who are involved in politics with a Pakistan-inspired spirit have been hatching plots to create anarchy on the election day,” the AL general secretary said.

“Some of them may try to incite violence in the name of guarding polling centres. They will be resisted with iron hands and everyone must remain alert against them,” he also said.

Quader also pledged the Feni-Noakhali-Laxmipur road will be developed to four lanes if AL comes to power again.

Replying to a query, the AL leader said in order to continue the trend of development, AL will come to power again through the citizen’s “vote revolution”.

The Election Commission yesterday said it cannot force any political parties to take part in the next parliamentary election, but it sincerely hopes the participation of all parties.

It gave a set of opinions on the recommendations made by political parties during recently held talks.

"We sent our opinions to these ministries as many political parties made several recommendations regarding them. We just informed them."

The EC said having a polls-time government under interim, caretaker or all-party system is a matter of political decision.

It added that the proposal for appointing EC officials and other officials as returning officers instead of deputy commissioners is in "active consideration".

Installation of CCTV cameras in and around polling centres will be based on EC's capacity, the commission said, adding that online voting system would not be introduced.

Twenty-eight out of 39 registered political parties took part in the dialogue with the EC between July 17 and 31. They made a number of proposals for ensuring a participatory and credible election. Nine political parties, including the BNP, skipped the talks.

The BNP demands a neutral government as it believes free and fair parliamentary polls are not possible under the Awami League rule.

On July 24, BNP Secretary General Mirza Fakhrul Islam Alamgir called for handover of power to a neutral caretaker government and formation of a new EC to ensure a participatory election.

In reply, it cannot compel any party to take part in the polls and it will not make any such attempts.

At least 10 political parties that took part in the talks were in favour of a polls-time government under interim, caretaker or all-party system.

Regarding some political parties' demand that the public administration, home, defence and some others ministries be brought under the EC during the polls, the EC said it would be considered in line with the constitution.

The EC said proposals of introduction of a proportional representation system, bicameral legislature, increasing of parliamentary constituencies and direct election to the reserve seats for women are under the jurisdiction of parliament, the government and political leadership.

About the staggered national elections, the commission said the matter needs more scrutiny.

The commission said they would decide on using electronic voting machine later.

However, Election Commissioner Md Alamgir on Sunday said EVMs would be used in the polls. "It has yet been decided how many parliamentary constituencies will have EVM only voting."

Responding to political parties' allegations that ruling party activists bar oppositions from electioneering, the EC said it believes the ruling party men will refrain from violation of such electoral code of conduct.

The commission added that local and international observers would get access to overseeing the polls.

Quader made the remarks while talking to reporters after a meeting with Indian High Commissioner in Dhaka Harsh Vardhan Shringla at the secretariat.

Responding to a question about the size of the new cabinet, he said, “We have no idea at the moment. The prime minister will decide.”

In response to a question on how Awami League secured win in all the constituencies in Noakhali though it is a BNP stronghold, Quader said once there was organisational weakness of his party in the region and after he took charge as the general secretary of AL, the party successfully overcame the limitation.