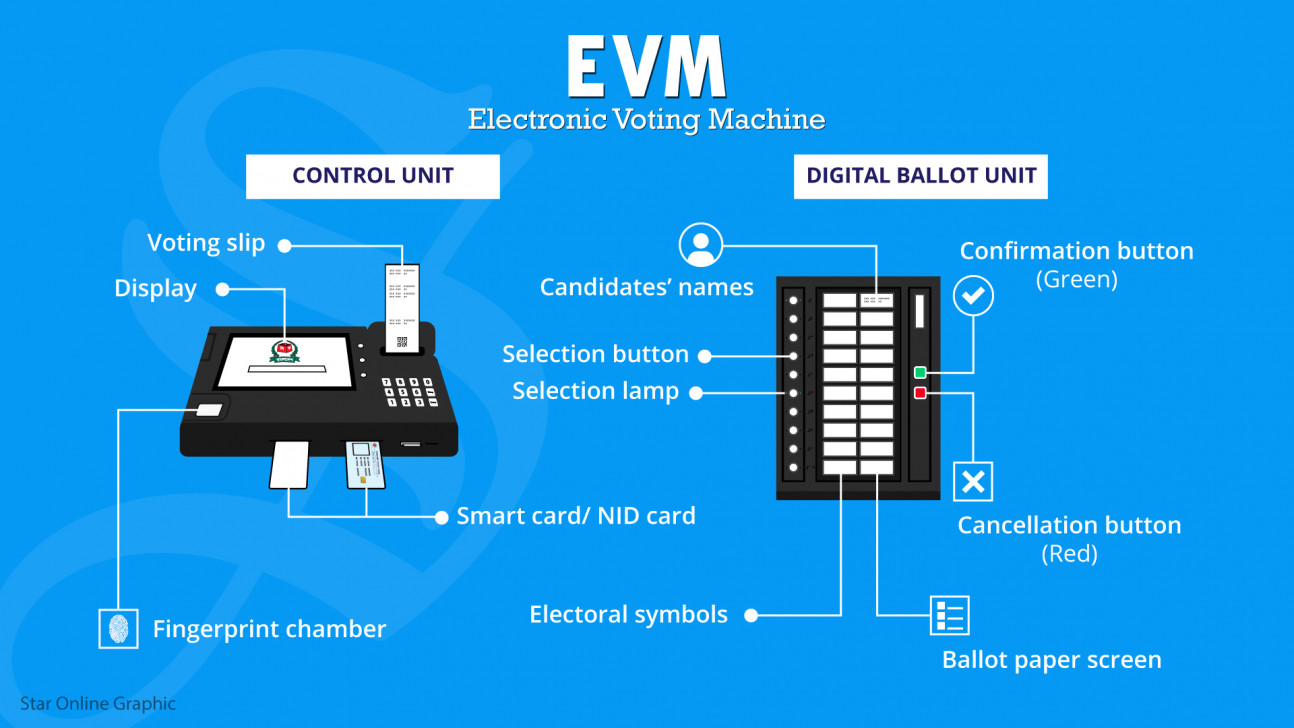 For the first time, Bangladesh’s parliamentary elections will be using Electronic voting machines (EVMs) and voters of Dhaka-6 and-13, Chattogram-9, Rangpur-3, Khulna-2 and Satkhira-2 will have the privilege of trying it out.

The Election Commission on November 24 decided to use EVMs in the six constituencies despite strong opposition from Jatiya Oikyafront, an alliance of BNP and several parties.

Recently, EC Secretary Helal Uddin said people would use EVMs to vote at 900 polling centres in those six constituencies and that no ballot papers would be needed there.

Electronic Voting Machines (EVMs) are used to cast vote without paper ballots. The voting machine is a combination of mechanical and electromechanical equipment which is used to define ballots, cast and count votes, and to display election results.

The only difference from a traditional ballot is, a voter will have to press buttons to cast vote instead of stamping on a ballot and folding it accordingly; as to not smear the ink.

HOW DOES THE MACHINE WORK?

Every machine has two parts – one ‘control unit’ and another ‘balloting unit’. Both the units are connected by a cable. The control unit is operated by an assigned polling officer and the balloting unit is used to cast vote in secret by pressing the button for the candidate’s name and symbol.

The control unit is considered as the ‘brain’ of the machine. The balloting unit is turned on only after the polling officer presses the ‘Ballot’ button on it.

Here is a guideline on how to cast vote using EVM.

A voter will be identified using smart card or fingerprint or voter number or national identification number.

Voter’s information will be displayed on the monitor of control unit if any of the four options is entered in the EVM machine.

After confirmation by the presiding officer, digital ballot unit which is kept in a secret room will be automatically activated.

Voters will enter the secret chamber located in the polling centre. There will be a “Digital Ballot Unit” in the secret room.

To cast vote, press the “Black Button” to the left side of the desired symbol. Then, the indicator beside the symbol will flash out. To confirm the vote, press the green button.

IN CASE OF CASTING THE WRONG VOTE

If you have identified the wrong symbol in any case, you will have the opportunity to correct the mistake unless and until you have pressed the “Green Button”.

To correct the mistake, press the “Red Button” of the “Digital Ballot Unit”. This will cancel the previous command. And the voter will get the chance to choose the symbol again. Then, confirm your vote by pressing the “Green Button” after the correction.

These guidelines have been prepared in light of the guideline of the Election Commission. Bangladesh first used EVMs in the 2012 Chattogram Municipality Election and later in the Cumilla and Narayanganj city elections.  The EVMs were also used in Khulna City Corporation election in May this year.