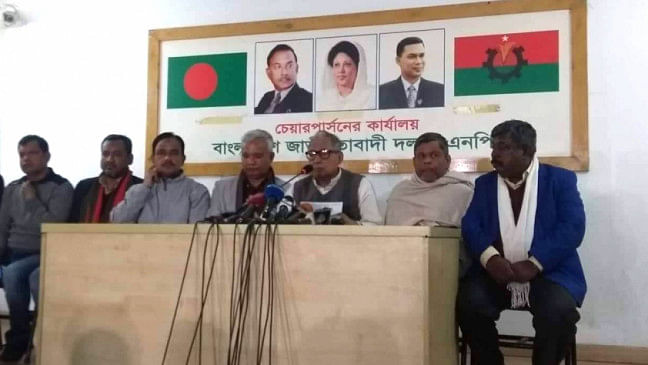 BNP leaders and activists are still getting obstructed, Khan, chairman of the party’s election management committee, said at a press conference.

The court has cancelled the candidacy of 16 BNP contestants after the election commission gave them validity, he said. The declaration came at the last moment.

“There was no time to give replacement candidates. The EC has conspired to gift those 16 constituencies to Awami League,” he alleged.

BNP candidates of Dhaka-4 and Dhaka-19 constituencies are fearing further attacks on their campaigns and activists.

They both complained of inaction from the authorities despite repeated complaints, they claimed at separate press conferences today.

Dhaka-4 candidate Alhaj Salauddin Ahmed held a press conference in his Shyampur residence, alleging of police threats to his supporters.

Expressing fear for his life and family, he alleged law enforcers are continuing drives to arrest and harass the opposition leaders and activists.

“Several times I have lodged complaints to the Election Commission in this regard but did not get any response,” he said.

He claimed arrests of at least 19 top BNP activists in the locality and attack and vandalism of BNP’s campaign offices in the area.

Fearing further vandalism, he said he has halted the election campaign for a few days. He too alleged of authorities’ inaction despite repeated complaints.

Subhash, a former leader of Bangladesh Chhatra League and a journalist, spoke about the fairness of the election and expressed his views over the allegations against ruling party.

Dr Sakhawat, on the other hand, spoke about the harassment, arrests and cases against opposition political activists to reflect on the situation on the field now.

Watch the video to know more…

BNP today placed promises for the ICT and outsourcing sector of the country in its election manifesto announced today.

Here are some of the significant promises from the party:

BNP Secretary General Mirza Fakhrul Islam Alamgir today unveiled the election manifesto of the party ahead of the 11th national elections slated to be held on December 30.

As voting for the 11th parliamentary election starts this morning, voters of some remote villages in Noakhali are passing days in fear as they doubt if they will be able to vote freely.

Many of them claim Awami League men warned them not to go to polling centres while police harassed and picked up those known to be opposition supporters.

In Noakhali-3 (Begumganj upazila), a number of locals alleged that ruling party men vandalised some 40 to 50 houses in at least five villages under Rajganj union around Thursday afternoon.

Divided in three to four groups, each consisting of 30 to 40 men, they carried iron rods, machetes and firearms and destroyed whatever was found in the tin-built houses, they added.

This correspondent visited Aladinagar, Bilalpur and Rajalyapur yesterday and found signs of vandalism as doors, windows and household items like television at some 15 houses were broken.

Alamgir Hossain, a grocer who lives in Aladinagar, alleged that ruling party men carried out the attack. The villagers went to local police station but “police refused to take any case just because they are BNP men”.

“I am not directly involved in politics. They vandalised my house because I just support BNP.”

Alamgir, however, said the villagers are united and they will go to the polling centres together this morning to cast vote in protest of the attack.

Firoz Molla, officer-in-charge of Begumganj Police Station, said a minor incident of violence centring on the polls took place in the area.

Seeking anonymity, a villager at Modhusudanpur under Narottampur union of the upazila said he is worried about his safety while casting vote today.

“I may not go to the voting centre if I see any untoward incident,” he said.

“The three were later handed over to local police. Their only offence was that they supported BNP,” Miron added.

He also alleged that ruling party men asked him to stay away from the polling centre.

Talking to this paper, BNP leader Moudud said he is hopeful of winning the election if it is free and fair as “he has a huge support base here”.

He alleged that many BNP activists were arrested by police.

Besides, ruling party men launched attacks during electioneering leaving over 100 of his party activists injured, he added.  “My only hope is the people. I will win if they can cast vote freely.”

Moudud said he has already selected some 1,200 polling agents, including the replacements in case anyone fails to reach poling centres due to police harassment and threats.

BNP candidate for Noakhali-4 Md Shahjahan also alleged that he was struggling to engage adequate number of polling agents on the same ground.

Tanmay Das, deputy commissioner of Noakhali and also the returning officer, said he is yet to get any written complaint over violence or harassment.

Based on some verbal complaints, he sent teams to some spots for investigations but the allegations were found to be “not true”.

Several officials, including the presiding officer of Nateshwar School centre, were injured in the attack around 11:00pm, Noakhali Superintendent of Police Ilias Sharif told The Daily Star.

The SP added that activists of BNP and Jamaat-e-Islami were involved in the attack.

The Daily Star could not independently verify the police claim.

AL General Secretary Obaidul Quader yesterday said the polls will be held under the supervision of the Election Commission while the government will assist it.

“It is going to be like the previous elections. It is on the right track,” he told reporters at AL's Noakhali district office.

On opposition alliance's directives to “guard the polling centres”, he said, “We will also guard the polling stations to maintain law and order so that voters can cast their votes peacefully today.

“Tomorrow's election will be held in a festive and peaceful manner and we are confident that we will win.