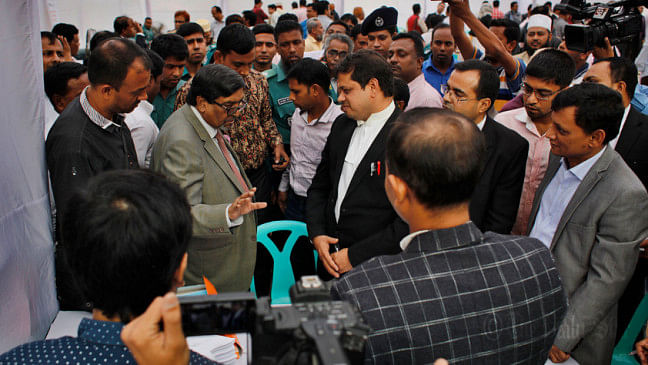 A total of 234 aspirants today filed appeals with the Election Commission as their nomination papers were cancelled by the returning officers during scrutiny.

With this, a total of 318 candidates mostly from opposition parties filed their appeals with the commission since yesterday, EC sources said.

The aspirants can file the appeal with the EC till tomorrow. The commission will start hearing on the appeals on Thursday.

Election Commissioner Mahbub Talukder today said the commission will hear rejection appeals of the candidates in a fair manner.

“We will be neutral during hearing the appeals,” Commissioner Talukder told reporters after a meeting with the 14-party alliance this afternoon.

Yesterday, 84 appeals were filed with the commission on the first day, after 786 applications to run for the upcoming general elections were turned down.

Election Commission has revised polls schedule, deferring the 11th general election by a week to December 30 – a decision taken in November.

As per the schedule, November 28 was the deadline to submit nomination papers, December 2 was the date for scrutiny and December 9 the last date for withdrawal.

Throughout the last half of November, major political parties were busy selecting their chosen candidates for the 300 constituencies across Bangladesh.

An election commissioner in Bangladesh usually does not have a positive image these days. But Mahbub Talukdar was an exception. He spent the entirety of his five-year's tenure under strict and difficult conditions. The Election Commission (EC), headed by Chief Election Commissioner (CEC) KM Nurul Huda, did not have a good impression; rather, it lacked public trust and was known to be the EC of overnight voting and voterless polls.

Being a member of such a controversial EC, Mahbub Talukdar had a completely different impression among the people – that he performed his duty with integrity and sincerity. Staying true to his commitment towards the people of the country, he spoke the truth at all times, despite all the difficulties he faced. He boldly stated what others did not, pointing out the flaws in our electoral system, criticising overnight ballot-stuffing, which elections were rigged, and how democracy was under duress. He was one of those rare people who did not hesitate to call a spade a spade.

Before becoming an election commissioner, Mahbub Talukdar was well-known as an author. One of the country's finest authors, he wrote stories, poetry, children's poems, novels, plays and research-based articles. He wrote for almost all the top newspapers in Bangladesh. The weekly Bichitra magazine used to publish his novels in its heyday.

His identity as an author was overshadowed to some extent when he became an election commissioner. Two of his books, Bongobhobone Paanch Bochhor and Amlar Amolnama, can be considered as valuable documents on the power structure of Bangladesh.

It is known that Mahbub Talukdar was the assistant press secretary of Bangabandhu Sheikh Mujibur Rahman's government. After forming BAKSAL, Bangabandhu told him to stay with him. Like many others, he too received Bangabandhu's affection and care.

After Bangabandhu and most of his family members were brutally killed on August 15, 1975, Mahbub's luck ran out. He was made an OSD (officer on special duty), demoted, and subjected to injustice and unfair treatment. He wrote in his book Amlar Amolnama, "Being made OSD after the change of regime in 1975 was a matter of pride for me. It is as if I finally got the seal of approval. When Bangabandhu and his family were killed, accepting this minor inconvenience made me feel compassion. It seemed like a natural occurrence. Later on, I realised that nothing could be more honourable [than being made an OSD] for standing by Bangabandhu. I would not have cared if I lost my job."

Mahbub Talukdar transcribed Bangabandhu's autobiography. Bangabandhu narrated, and he recorded and wrote. Covering the events in Bangabandhu's life from his birth till 1954, a manuscript of 300 pages was typewritten and prepared. Mahbub left the manuscript at his office on August 14, 1975. He could not retrieve it after August 15. Later on, Ershad burnt many documents from Bangabandhu's time in the government. It is assumed that the manuscript may have been among the documents that were reduced to ashes.

As his assistant press secretary, it was Mahbub's responsibility to record each and every one of Bangabandhu's speeches. He preserved speeches recorded in spools, many important documents, personal letters written to Bangabandhu, Pakistani intelligence files on Bangabandhu and many other archival materials. He handed all of these over to Prime Minister Sheikh Hasina in 2019. He mentioned all this in his unpublished book Nirbachonnama.

As an election commissioner, Mahbub Talukdar was depicted as anti-Awami League and pro-BNP. It is true that BNP had suggested his name for the Election Commission. When I spoke to him about this, he said, "I heavily criticised Ziaur Rahman in my book Bongobhobone Paanch Bochhor. I was made an OSD for 1,223 days during Khaleda Zia's regime. I was close with Bangabandhu, Sheikh Kamal, Dr Wazed Miah, Sheikh Moni and others. It pains me to speak against Bangabandhu's daughter Sheikh Hasina. But I have no other option if I think about the country and the nation's best interests. She is taking the country towards an unknown destination with fabricated elections and an authoritarian rule."

He elaborated on these thoughts in Nirbachonnama.

Three legacies of the Election Commission

In 1971, Mahbub was a student of Dhaka University. Soon after, he went to Kolkata and joined the first government of independent Bangladesh under Tajuddin Ahmed's leadership, working with the information ministry. He retired as an additional secretary in 1999. Throughout his career, Mahbub worked as the director general of many institutes including Bangladesh Shilpakala Academy. He also held critical secretarial roles in different ministries.

In the initial days of his career, Mahbub was a journalist working in The Daily Ittefaq. He also taught at the then Jagannath College, Bangladesh University of Engineering and Technology (Buet), and Chittagong University.

Mahbub Talukdar was an organised, skilled, efficient and industrious individual. He did not confine his work to the role of election commissioner. He wrote a 1,200-page book detailing his observations, incidents of injustice and anomalies and incidents happening behind the scene during his tenure.

"This book cannot be published while I am still alive. It contains highly sensitive information. It will be published posthumously," he had said.

‘My agenda has been to uphold democracy’

When Mahbub joined the Election Commission, he knew his days were numbered. Cancer had spread throughout his body. He contemplated his remaining years, but did not waste them thinking about death. He utilised every waking moment.

For five years in the EC, Mahbub Talukdar was like a lonely Sherpa. While the EC almost always maintained a servile attitude, he was an exception. He showed that there are still some people who have backbones, who can still take a truth-faring stance and challenge the overall status quo. Mahbub Talukdar's acts enraged the people in power, but gained people's love.

Mahbub was a man of many talents. He was a dependable bureaucrat, a skilled administrator, and a powerful author. The people of Bangladesh will remember him for his courage, firm stance, truthfulness and honesty.

Golam Mortoza is the editor of The Daily Star Bangla.

Speaking to reporters after a meeting with an American Department of Commerce delegation, Tofail said, “Although Election Commissioner Mahbub Talukdar’s name was recommended by BNP, the commission is neutral and we should not look into who is aligned with which political party”.

Tofail added that the formation of the current Election Commission was carried out a search committee, so everybody has been appointed based on their merits, reports UNB.

There may be conflict of opinion in the Election Commission and it is normal to disagree on something, the minister said.

Earlier today, Election Commissioner Mahbub Talukdar had opposed a move to amend the Representation of People Order (RPO) to incorporate the use of the Electronic Voting Machines (EVMs) in the upcoming parliamentary elections to be held at the end of December.

He later walked out of a commission meeting half-an-hour after it started over the planned amendment to the RPO and later sent a ‘note of dissent’ through an officer.

Tofail also said that the use of EVMs is completely up to the Election Commission’s jurisdiction and nobody else's.

“EVMs are used everywhere across the world, even in the United States. It was used in the recent Sylhet and Rajshahi city corporation polls in some of the centres, where BNP had won some and Awami League in the others,” the minister said, adding, “since the formation of the Election Commission, BNP and its allies have been trying to make it controversial”.

He believes the upcoming general election will be held successfully.

On January 31, 2017, a total of 25 political parties, including Awami League and BNP, submitted names to the search committee for reconstituting the Election Commission (EC).

Mahbub Talukder took part in the Liberation War in 1971 and joined the Ministry of Information of the Mujibnagar Government, according to the official website of Bangladesh Election Commission.

He was also engaged with the Swadhin Bangla Betar Kendra during the Liberation War.

During his public service, Mahbub also served as the Director General of Bangladesh Shilpakala Academy.

At the final stage of his service, he was made additional secretary of Parliament Secretariat in 1998.

Mahbub Talukder is also a noted author. He has so far published 40 books on poetry, memoirs and novels, among others. He received the Bangla Academy Award in 2012.

Information Minister Dr Hasan Mahmud today said Election Commissioner Mahbub Talukdar should quit his post before delivering the speech he has made recently.

EC Mahbub yesterday underscored the need for reforming the election process and said public representatives who are elected illegally have no commitment to people or democracy.

Hasan Mahmud said, “I think his statement regarding his failure is just a self-deception. He should quit his post before making such comment.”

According to the law ministry, the draft has been sent to the ministry with the exclusion of 11 basic and procedural provisions.

The most concerning issue is the abolition of the direct power of the RPO or Section 91 of the Representation of the People Order, 1972, to cancel the candidature of an individual, which was vested on the Election Commission, he said.

"I think it is a suicidal decision of the Election Commission to move away from the sole power of direct cancellation of candidature," Mahbub said.

Besides, in his "note of dissent", the election commissioner said, "I also disagree with the Election Commission's proposal to amend the local government body's election management act."

Election Commissioner Mahbub Talukdar today expressed grave concern over the present voting system and underscored the need for reformation of the electoral process.

"Public indifference to voting is now being noticed. It is an ominous sign for democracy," Mahbub Talukdar said while addressing a programme in Dhaka on the occasion of National Voters' Day.

The lack of trust in the voting system will have to be addressed at any cost, the commissioner said.

While addressing the same programme, Chief Election Commissioner KM Nurul Huda said that the number of voters in the country at present is around 10,98,19,112.

Some 360 transgender people were added in the voter list for the first time, he added.

According to an EC official, 55,79, 030 new voters were added to the updated voter list.