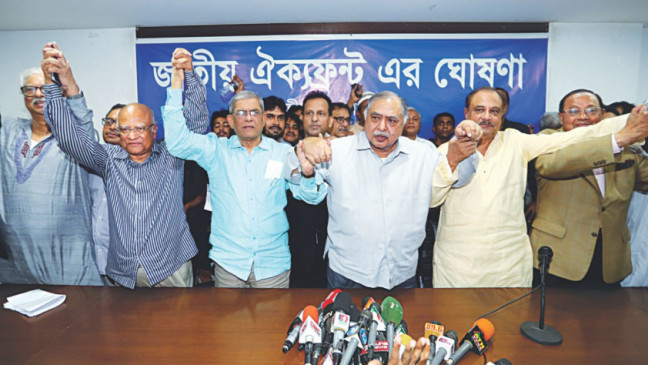 “EC is doing nothing to stop attacks on the opposition activists,” he said at a press conference at Oikyafront’s Paltan office in Dhaka this afternoon.

Criticising the commission’s role, he said: “The opposition candidates are being attacked everywhere, but there is no investigation by the EC”.

There is no legal action taken yet by the commission against the attackers, he alleged; adding that he finds slack in initiatives taken by the body.

Expressing concern over the matter, he said: “I have doubt over the EC whether it will be able to hold a fair and credible election if such situation is going on”.

He called on the party activists to stay alert so that the voters can go to the polling stations safely and cast their votes.

WHAT ARE THE ALLEGATIONS AGAINST GOVERNMENT?

BNP and JatiyaOikyafront have been blaming the government for carrying out mass arrest and harassment of their contenders, leaders and activists deliberately across the country ahead of the December 30 general election.

After announcement of the election schedule, BNP has been lodging complaints with the Election Commission (EC) seeking its step to stop the ongoing arrests and harassment for creating a level-playing field to hold the 11th parliamentary election in a credible manner.

WHO ARE THE TOP LEADERS WHO HAVE COME UNDER ATTACK?

On December 14, JatiyaOikyafront key leader Dr Kamal Hossain’s motorcade came under attack near Martyred Intellectuals Memorial at Mirpur while he was returning after paying tribute, leaving at least 25 to 30 people injured.

At least 10 people were hurt and four vehicles were also vandalised in the attack, according to BNP.

On December 15, BNP leader Mirza Abbas reportedly came under attack when he was electioneering near Shegunbagicha area of Dhaka. Seven to eight BNP activists were wounded in the attack.

He said their party president went to Thailand from Singapore after receiving treatment at Mount Elizabeth Hospital there.

On January 19, Dr Kamal and his wife went to Singapore for medical purposes.

Pathik said Dr Kamal Hossain was supposed to return home early Monday, but it was deferred for some unavoidable reasons.

Jatiya Oikyafront Convener Dr Kamal Hossain yesterday said it was a mistake on the part of his party Gonoforum to have joined the December 30 polls with Jamaat-e-Islami leaders contesting under the alliance banner.

He also said they would put pressure on the BNP to sever its ties with Jamaat in order to keep the unity of the Oikyafront intact and strong.

Dr Kamal made the statements following a meeting of his party's central committee at its office in the capital's Arambagh.

"I've already publicly said that I was not aware of Jamaat's participation in the election [under the banner of the Oikyafront]. When I gave consent [to contesting the polls under the alliance's banner], I was not informed about Jamaat. I think you can call it a mistake," he told journalists.

Around 70 leaders from the Gonoforum's central committee participated in its first meeting after the 11th parliamentary polls. It began at 10:00am and concluded around 3:45pm.

The meeting was organised to discuss the party's next course of action following the election.

The Awami League-led grand alliance won the polls bagging 288 out of the 299 seats. The election to the remaining seat of Gaibandha-3 will be held on January 27.

The Jatiya Oikyafront won eight seats, including six for the BNP and two for the Gonoforum.

Twenty-two Jamaat leaders contested the election with the “sheaf of paddy”, the BNP's electoral symbol.

One of the framers of the country's constitution, Dr Kamal had earlier been criticised for allowing Jamaat leaders to take part in the polls under Oikyafront's banner.

Jamaat-e-Islami had opposed the country's 1971 Liberation War and its top leaders were involved in crimes against humanity.

The BNP has claimed that whoever contested the election with the “sheaf of paddy” symbol were candidates of their party, not of Jamaat's.

The AL said that one of the reasons for the Oikyafront and the BNP's defeat in election with a margin so huge was that they allowed Jamaat leaders to participate in it.

The AL rejected the demand.

After Gonoforum's meeting, Dr Kamal told reporters that he never did politics along with Jamaat and would not do so in the future either.

"My position is clear. We never did politics along with Jamaat nor [are we] thinking of doing so in the future. Whatever you've said about our politics involving Jamaat, we were not aware of it," he said.

When asked what the Gonoforum's position would be if the BNP did not sever its ties with the Jamaat, he said, “We will talk about it if it happens.”

Gonoforum General Secretary Mostafa Mohsin Montu said their party forged the alliance with the BNP, not with the 20-party or the Jamaat.

Asked whether his party's two elected MPs would take oath, Montu said they would discuss it and decide later.

At the meeting, he said their leaders discussed the post-election atmosphere and worked out their party's future course of action.

Montu said their leaders strongly believe that to wage a democratic movement in the days to come and to “restore democracy”, there was no other alternative to national unity.

Dr Kamal said there was no disagreement among the people regarding the formation of the parliament through a fair and acceptable election.

“No one apart from the ruling party spokesmen are saying that a fair election was held on December 30, while there is no scope for saying it. I don't think it's a big deal to resolve such a problem. The government should hold a fair election within two to three months, enabling everyone to cast votes in the interest of the country and the constitution.

“People should be given a chance so that they can cast their votes as per their will. If you get the majority of the votes in a fair election, it'll be meaningful. If a government is formed through a fair and credible election, it will be easier for it to discharge its duties properly.”

Speaking to The Daily Star, several Gonoforum leaders who were present at the meeting said they discussed the strengthening of the Oikyafront in such a manner that no one can “malign its reputation because of the Jamaat and the BNP Acting Chairman Tarique Rahman.”

The meeting also decided to hold its central council on March 23 and 24.

Main opposition alliance Jatiya Oikyafront leaders today asserted that they would not give in to any obstacles on the polling day.

“Your one vote will ensure Khaleda Zia’s release. Keep this in mind and go to vote, along with your neighbours on voting day,” Mirza Fakhrul Islam Alamgir, a top leader of Oikyafront, said.

Fakhrul, also secretary general of the BNP, also urged the voters not to leave the polling centres before the vote counting ends.

He was speaking at the rally of Oikyafront in Narayanganj. In the starting, the leaders introduced the candidate for Narayanganj-5 constituency SM Akram and sought vote for him.

Urging the law enforcers and administration to carry out their duties neutrally, Fakhrul said: “You are oath-bound to work neutrally. The nation expects that you will be the people and protect peoples’ interests.”

“Take steps to hold a free and fair election otherwise step down. People of the country will not accept any unjust,” he said.

Dr Kamal Hossain today called upon all to take to the streets to bring down the government instead of just holding indoor meetings.

“No more indoor meetings. We will unite and take to the streets to keep the movement going,” said Dr Kamal Hossain, Jatiya Oikyafront convener, while speaking at a meeting demanding BNP Chairperson Khaleda Zia’s release on the occasion of the second anniversary of her imprisonment.

The meeting was organised by Oikyafront at Dhaka Reporters Unity.

Khaleda was sent to jail after a lower court sentenced her to five years’ imprisonment in the Zia Orphanage Trust graft case on February 8, 2018.

He said they are tolerating a farce in the name of election. “Unelected people usurped power and are ruling the country. People will not accept that,” said Dr Kamal, also president of Gonoforum.

The Jatiya Oikyafront top leader said that if people are deprived of freedom they become victims of corruption and looting. “None can give autocracy an institutional shape. People who had tried faced dire consequences,” he added.

He said that celebrating 50 years of independence, while depriving people of their rights, is nothing but a farce.

Speaking about Khaleda Zia, Dr Kamal Hossain said, “The term political prisoner sounds strange 48 years after independence. It is unimaginable that demand of release of Khaleda Zia need to be placed and meetings are held for that.”

BNP standing committee member Abdul Moyeen Khan urged all to unite and wage a movement to oust the government.

Jatiya Samajtantrik Dal President ASM Abdur Rab at the programme cautioned the government that if they want to leave power peacefully, they have to release Khaleda Zia.

Oikyafront leader and Gonoshasthaya Kendra trustee Zafrullah Chowdhury opined that it would not be wise to take part in the any elections without the release of Khaleda Zia.

“I am demanding release of all political prisoners including Khaleda Zia before Eid so that we can observe Eid with our dear and near ones,” Kamal said in a statement.

Kamal, also convener of Jatiya Oikyafront, extended Eid greetings to the countrymen and sought blessings ahead of the Eid-ul-Fitr.

He urged the authority concern to stop repression and harassment on opposition party men.

He also urged to withdraw of all cases lodged against Khaleda Zia and others opposition leaders and activists.