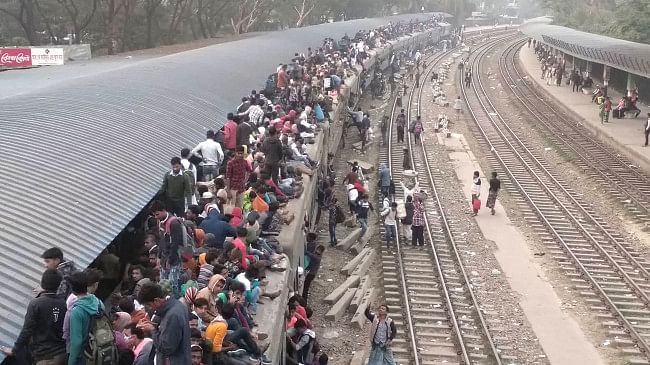 Dhaka city dwellers are leaving the city on December 28, 2018 for their home in masses ahead of the upcoming general election to be held on Sunday. The photo was taken at Airport Railway Station. Photo: Star/ Palash Khan
Star Online Report Star Online Report

Dhaka city dwellers are leaving the city for their home in masses ahead of the upcoming general election to be held on Sunday.

The home rush began yesterday, as the two weekends, today and tomorrow, make up an ideal three-day holiday to visit ancestral homes.

Because many of the dwellers are voters of their home districts, they must travel back to their home land to cast their ballot and exercise their franchise.

People were seen gathering on all the exit points of the city. Gabtoli, Kamlapur and Sadarghat were teeming with outbound people since this morning.

The home-goers are expecting to enjoy happy times with their near and dear ones along with exercising their democratic rights to vote.

“Every moment we are getting information about attacks on our leaders, activists, and supporters by the BNP-Jamaat men. Hundreds of campaign offices have been vandalised,” he said at a press conference at the media centre of the AL central office.

Imam demanded that the Election Commission withdraw permission given to nine local election observer organisations. He said the organisations were set to send around 6,585 observers in 140 constituencies and most of the observers were activists of the BNP and Jamaat-e-Islami.

Talking to The Daily Star, Rezaul Karim Chowdhury, executive director, Coast Trust, said, “HT Imam is a gentle man. But he misunderstood us.

He also said BNP-Jamaat in 2008 and recently had complained against them “for favouring the AL”.

“As questions have been raised against us, we are considering not getting involved in election observation activities,” he added.

A delegation of ruling AL yesterday urged the EC to allow journalists to use motorcycles during the election so that they could cover the polls better.

After the meeting, they told reporters that they also urged the commission to stay alert about criminals cloning phone numbers of EC and admin officials to misdirect field-level officers.

The BNP and Jamaat men were attacking AL activists and police and were using black money in their campaigns, the delegation claimed. They said

“We're demanding immediate arrest of all BNP-Jamaat cadres involved in terror attacks and violence … bring them to book … ,” Akteruzzaman added.

Ruling Awami League activists in Cumilla today flexed their muscles to release a party man from the custody of local police just two days ahead of election.

Over a hundred men of the party surrounded a local police station to free one of the supporters after the latter was detained, our local correspondent reports.

Awami League activist Syed Raihan was detained around 2:00pm by Cumilla Kotwali Police for reasons not ascertained, according to local police sources.

AKM Bahauddin, current lawmaker from Awami League for Cumilla-6 and a candidate of the seat in the election, went to the police station hearing the news.

Bahauddin went inside and talked with the officer-in-charge, and after a short while, Raihan was released without further ado.

Asked about it, Abu Salam Mia, officer-in-charge of the police station, told The Daily Star: “The detention was made out of a misunderstanding. He did nothing wrong.”

Seeking anonymity, some local Awami League activists told The Daily Star that Raihan was a member of a rival group of the party, but switched sides recently to work for MP Bahauddin.

Tariqur Rahman Jewel, general secretary of Cumilla Sadar Awami League, told The Daily Star: “Since there were no cases against him, our lawmaker went to the police station to get him out so that he is not harassed without reason.”

He formally joined the ruling party after offering bouquet of flower to AL President and Prime Minister Sheikh Hasina at her official residence Gono Bhaban this evening.

A member of prime minister's press wing confirmed the development to The Daily Star.

The Election Commission yesterday decided to hold re-elections in three polling centres of Brahmanbaria-2 on January 9, as the polls there were suspended on Sunday.

In a notice, signed by EC Joint Secretary Forhad Ahammad Khan, the commission said that elections in three of the 76 polling centres were suspended following deterioration of law and order during Sunday's national election.

During voting hours on Sunday, supporters of two candidates were locked in a heated argument after which voting was suspended in the three centres. The incident occurred around 11:00am.

EC officials said that the BNP candidate Abdus Sattar Bhuiyan was leading the polls in the constituency with 82,723 votes while independent candidate Moyeen Uddin bagged 72,564 votes.

Two makeshift election campaign camps of the local BNP candidate in Meherpur have been vandalised.

He alleged, ruling party activists led by local UP Member Liton Hosen vandalized two of his election camps in Chatian and Bamundi areas.

He claimed, he did not get any help from police or the returning officer of the area to this end.

UP Member Liton has denied his involvement and said he did not know who were behind the attacks.

Shukumar Biswas, officer-in-charge of Gangni Police Station, said that nobody filed any complaint over the incidents.