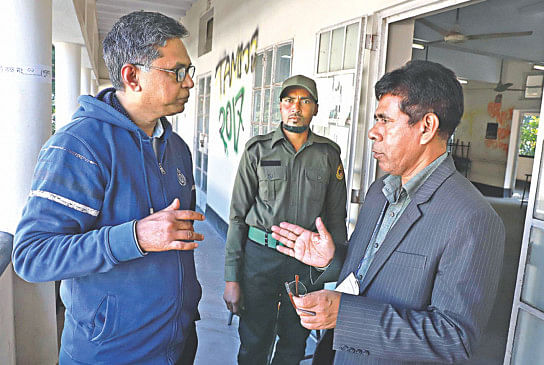 A voter who had his national ID card talks to the presiding officer of Viqarunnisa Noon School & College polling centre yesterday after being told he was not a voter of that centre. The man despite being a local was denied at two polling centres. He eventually left without casting his vote.
Staff Correspondent Staff Correspondent

An unspecified number of voters had to give up their voting right and go back home in anger and frustration yesterday, as polling officials refused to help them find their voter serial number.

Touhida Tasnim, along with several other women, came with their national identity cards to centre-67 at Gulshan Model School and College but they did not know their serial numbers. They were seen frantically wandering and requesting whoever they came across to help them find the serial number. Finally, when they approached the presiding officer of the centre, Md Intajuddin, he turned down their request.

“I am sorry, I can't help you in this. The Election Commission has not given any instruction about helping in finding voter serial numbers,” said Intajuddin, as The Daily Star correspondent, present at the scene, asked him how a voter could know about his or her serial number.

Voters asking a party activist for their serial numbers at Khilgaon Model College centre in Dhaka.

Talking to The Daily Star, Touhida said, “This is absurd. We have national identity cards; still we are unable to vote because we can't find the voter serial number at the polling centres.”

Many voters like Touhida were seen leaving Gulshan Model School and College without casting votes.

Usually, supporters of candidates voluntarily help voters with the serial number outside polling stations, but this year it was only the ruling party followers providing the service. They, however, abruptly stopped helping voters after 1:00pm at many polling stations.

In a similar fashion, scores of voters were seen going back from the polling centres at MDC Model Institute in Mirpur, where law enforcers declined to let in voters who did not know their serial number.

Voters checking their phones for their voter numbers at Ali Ahmed Majumder School and College in Dhaka's Goran. Many were turned away after failing to find the number.

The Daily Star correspondents witnessed hundreds of voters leaving polling centres without casting votes at several other centres including Kamalapur School and College, Khilgaon Model College, Siddheshwari Girls School, and Monipur School and College in Shewrapara. Many of them told The Daily Star that they would go back home rather than casting votes.

“As per rules, the polling officials at the voting centres are bound to find the voters' serial numbers whenever a voter comes to the centre,” said SM Asaduzzaman, joint secretary of the Election Commission, while talking to The Daily Star.

It is not even mandatory for voters to carry national ID cards to know the voter serial number while going to polling stations for casting votes, he said.