CEC rules out any scope of re-election

Says voter turnout was 80 per cent 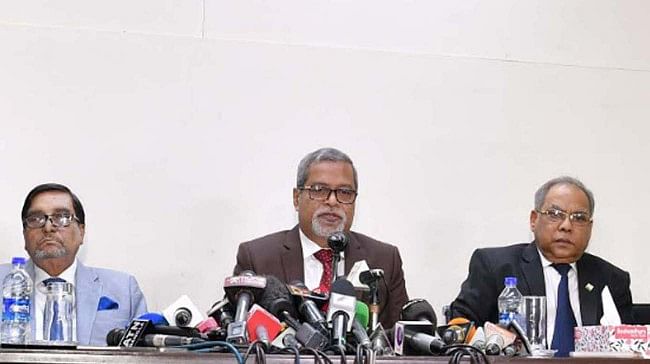 Besides the CEC, two ministers criticised the report.

Information Minister Hasan Mahmud said the TIB report was a “deliberate falsehood” and it echoed the speech of opposition alliance -- Jatiya Oikyafront -- regarding the December 30 polls.

On Tuesday, the TIB in its study titled “Review of Election Process of 11th National Election” said irregularities took place in 47 out of the 50 constituencies it surveyed.

It termed the polls “partially participatory, non-competitive, questionable and faulty" and demanded a judicial inquiry into the reported irregularities.

The TIB study found ballot boxes filled-up before polling even began in 20 constituencies; voters forced to cast ballots for a particular symbol in 26 constituencies, casting of fake votes in 41 seats, silence of the administration and law enforcing agencies in 42 seats and obstructing and driving out polling agents in 29 seats.

In the 50 constituencies, not all the polling centres necessarily saw the anomalies. Irregularities happened in one or more centres of a seat, the watchdog said.

“We are completely rejecting the TIB report on the election. It is baseless,” the CEC told reporters after an orientation programme of the newly appointed Election Commission officials at the Nirbachon Bhaban in the capital yesterday.

The CEC said there was no similarity of the TIB report with those published in newspapers and accounts of other observers on the voting day.

Information provided by the election enquiry committees, executive magistrates and EC officials and others on the polls also do not match the TIB findings, he said.

The CEC also slammed the TIB's allegation that the EC failed to act neutrally and the role of some polling officers and law enforcement agencies were biased, saying, “The speech is disrespectful ... They should not speak like that.”

He said the commission would not take any step against TIB over its report.

“The TIB has come up with the fairy tale long after the election,” Quader told journalists after an extended meeting of Dhaka South City unit Jubo League at AL's central office on the Bangabandhu Avenue.

“The TIB has cooked up so many imaginary and unbelievable stories. The countrymen will give a reply to the report.”

He termed the December 30 election transparent and excellent.

“Did any agent of BNP and Oikyafront candidates make any objection about the transparency of the election on the voting day?” Quader questioned.

In another development, Information Minister Hasan Mahmud said, “There is no difference between the TIB    report and the speech of the Oikyafront. In fact, the TIB just published a report in favour of BNP and Jamaat-Shibir.”

He was addressing a press conference in his Dewanji Pukur Par lane house in the port city yesterday, reports a staff correspondent in Chattogram.

The minister added that though the TIB usually claimed that its reports were based on research findings. But in fact, no proper research was actually done.

“If any situation that needs to be controlled arises in front of the army, they will go there on their own and bring the situation under control," he said.

The army personnel have been deployed to restore voters' confidence, Huda said, urging all the political parties to maintain a congenial atmosphere for the December 30 election.

He made the comments while visiting a trial voting session on using electronic voting machines (EVM) at Dhaka Residential Model School and College.

Army personnel started discharging election duties yesterday to help ensure a peaceful atmosphere and maintain law and order across the country for the polls.

The CEC urged all the political parties to ensure that the election was held the way it should be. He also asked them to shun violence, remove “misunderstandings” and dedicate themselves only to electioneering.

In this regard, the army's role would be helpful, he pointed out. “I do believe, from now on, anything untoward will be controlled.”

Responding to a query, Huda said Election Commission officials would be in charge of operating the EVMs while skilled army personnel would assist them.

Asked if the BNP would be allowed for a rally at the capital's Suhrawardy Udyan on Thursday, he said he would communicate with the Dhaka Metropolitan Police over the matter.

'NOTHING TO BE DELIGHTED ABOUT'

"The army has taken positions in districts to discharge duties for the sake of a free and fair election. A quarter is much delighted over the army deployment. But they should remember that they [Army] would not work for any particular party. Their role will be neutral,” he said.

Quader urged all not to make the army controversial.

Yesterday, the AL also sought steps from the EC to stop “attacks on its activists across the country during campaigning”.

He hoped that the polls environment would improve as members of the armed forces were deployed.

Meanwhile, Islami Andolan Bangladesh lodged a complaint with the EC, saying its activists were facing attack and harassment across the country, said the party's Senior Joint Secretary General ATM Hemayetullah.

The High Court (HC) today rejected a writ petition that challenged the legality of oath taking by lawmakers elected in the December 30 general election.

The court came up with the order saying that there is nothing illegal in taking oath taken by the lawmakers as they took charges of their offices on January 30.

Earlier on February 6, the court concluded hearing on the petition and fixed today (February 18) for passing an order.

On that day, AM Mahbub Uddin Khokon argued that oath taking by the lawmakers on January 3 was unconstitutional as the tenure of the 10th parliament expired on January 28.

“Therefore, there were two parliaments from January 3 to January 28 -- which is unconstitutional,” he told the court on February 6.