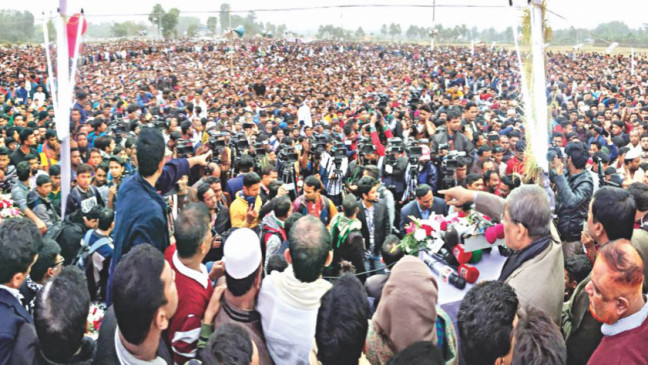 Top leaders of the Jatiya Oikyafront yesterday said December 30 would be the “day of freedom” for the country's people as no one would be able to snatch their victory in the 11th parliamentary election.

Addressing rallies in Cumilla's Daudkandi, Chandina and Soagazi, they also called upon the people to go to polling stations and stage a vote revolution, braving all obstacles and intimidation.

“If we remain united, no one can rob our victory,” said Mirza Fakhrul Islam Alamgir, an Oikyafront top leader, while speaking at a roadside rally at Daudkandi on his way to Chandina and Soagazi.

He also called upon the voters to ensure the victory of “sheaf of paddy”, the electoral symbol of the BNP, through a “vote revolution” on December 30 to free BNP Chairperson Khaleda Zia from jail and “restore democracy”.

“Cast your votes for 'sheaf of paddy' to bring democracy back, free Khaleda Zia and ensure Tarique Rahman's homecoming,” he said.

BNP men started swarming at Phultoli playground in Soagazi hours before the Oikyafront leaders arrived there around 2:15pm.

Yesterday's rallies were the first of the alliance in Cumilla.

Local BNP leaders alleged that they could not conduct election campaign in the area due to police harassment and intimidation by ruling Awami League men.

The locals crowded the venue, getting a chance to raise their voice, the leaders added.

Women were seen gathering in nearby houses to hear the alliance leaders' speeches.

Fakhrul started his journey for Cumilla from BNP chairperson's Gulshan office around 10:00am.

In his speech at Soagazi, the BNP secretary general said the countrymen did not want to see this government in power anymore, as it destroyed democracy as well as the country. “We all are now united. We will drive the government away from power.”

Mentioning that numerous people were victims of enforced disappearance, killing and arbitrary arrest, Fakhrul said people wanted to get rid of the “oppressive government”.

In an emotion-choked voice, he sought votes for “sheaf of paddy” for the sake of freedom of the jailed BNP chief.

Fakhrul urged the party men to remain in the election race and not to bow to any danger or fear of arrest. “Go to every house to seek votes till December 30.”

Kader Siddique, a leader of Oikyafront and president of Krishak Sramik Janata League, said, “You have to cast votes on December 30 if you want to get your leader [Khaleda] out of prison.”

The only candidate of “sheaf of paddy” is Khaleda and the contenders across the country are just her representatives, he said, urging all to vote for the alliance contestants.

Chowdhury Saima Ferdous, daughter of Monirul, asked party leaders and activists to guard the polling centres on the voting day to bring victory for her father.

“No power is stronger than the power of the mass. We will not be afraid of bullets on December 30,” said Saima, also a Dhaka Universtiy teacher.

Holding their hands high, the grassroots leaders promised her that they would guard the polling centres on the voting day at any cost.

In Chandina, the Oikyafront leaders campaigned for its candidates Redwan Ahmed and Kazi Mujibul Haque who are contesting in Cumilla-7 and Cumilla-3 respectively.

Speaking at Dr Redwan Ahmed University College ground, Fakhrul alleged that there was no atmosphere of holding the polls in a free and fair manner.

“The election is going to turn into a farce. But people understand this very well. The government's conspiracy and evil design will be washed away in the face of people's united efforts,” he added.

Kader Siddique alleged that the ruling party men were attacking opposition candidates as they got frightened due to their huge popularity.

The two traded greetings and shared some light moments during the exchange, according to several men who were present at the scene this afternoon.

A close aide of Fakhrul told The Daily Star, the meeting took place when Fakhrul was waiting at the airport to return to Dhaka and Quader in the VIP waiting room.

Obaidul Quader entered the room where the senior politician was waiting and went forward.

Quader said: “As we are politicians, it will be better to keep our doors open for discussion,” Biplab Barua, deputy office secretary of the Awami League, who was present, told The Daily Star.

Quader said: “I was waiting for you at Dhaka airport. But, I heard that you were not coming. It would be good if we could come together and talk.”

Responding to Quader’s remarks, Fakhrul said he had to change schedule for family affairs.

“Our paths can be different in politics but there can be a formal relation between us. As we do politics, the path of talks should remain open,” Quader said to have said.

Yesterday, both the top leaders were scheduled to reach Sayedpur Airport in Nilphamari by the same flight, but Fakhrul later cancelled his schedule.

Sakku was dismissed from all posts in the party, including primary membership, for his involvement in activities that violated party discipline, said a statement signed by BNP's Assistant Office Secretary Taiful Islam Tipu today (May 19, 2022).

From now on, party leaders have been requested not to keep in touch with him, read the statement.

Declaring BNP's acting chairman Tarique Rahman and his wife Dr Zubaida Rahman as "fugitives", the High Court today (June 26, 2022) rejected their writ petitions challenging the initiation and filing of a Tk 4.82 crore corruption case filed during the caretaker government in 2007.

The HC also withdrew the stay order on the case and directed the lower court concerned to complete the trial proceedings in the case as early as possible.

The chief metropolitan magistrate of Dhaka has been asked to send the record of the case to the Metropolitan Sessions Judge's Court in Dhaka in 10 days.

The bench of Justice Md Nazrul Islam Talukder and Justice Kazi Md Ejarul Haque Akondo pronounced the verdict after hearing arguments on whether Tarique and Zubaida, who have been living in London since 2008, are fugitives in the case.

The question was raised before the bench on June 5 when it was dealing with three separate writ petitions filed by the accused, challenging the filing and initiation of the case under the then Emergency Power Rules (EPR).

The full text of the verdict was not released.

On September 26, 2007, the ACC filed the case with Kafrul Police Station against Tarique Rahman, his wife Dr Zubaida Rahman, and her mother Iqbal Mand Banu for amassing assets worth Tk 4.82 crore through illegal means and concealing information in their wealth statement.

Three top leaders of BNP today failed to meet their party chief Khaleda Zia, now in Dhaka's old central jail, as the jail authorities did not allow them to enter the jail.

Fakhrul, along with the party's standing committee members Mirza Abbas and Nazrul Islam Khan went to the old jail on Nazimuddin Road in Dhaka around 3:00 pm.

“Based on prior permission, we came here to meet our party chief Khaleda Zia, but failed as the jail authorities didn’t allow us,” BNP Secretary General Mirza Fakhrul Islam Alamgir told reporters in front of the jail gate this afternoon.

BNP Secretary General Mirza Fakhrul Islam’s motorcade was intercepted by unknown criminals on his way to attend an election rally in Bandar Upazila of Narayanganj this afternoon.

Fakhrul was scheduled to address a rally organised by Jatiya Oikyafront in Sonakanda of the upazila this afternoon, reports our local correspondent.

Later, Fakhrul and other party members continued their journey through a different route with the help of the local administration, the correspondent said.

When contacted, Naryanganj Additional Superintendent of Police Mominul Islam said “We are investigating the incident”.