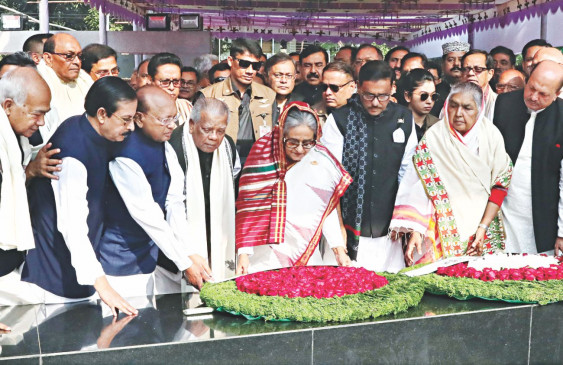 The ruling Awami League will hold a grand rally in the capital's Suhrawardy Udyan on January 19 to celebrate the party's landslide victory in the December 30 polls.

The programme will start at 2:30pm and AL President Sheikh Hasina will be the chief guest, said a press release.

AL General Secretary Obaidul Quader called upon all leaders and activists of the party to attend the rally to make it a success.

Besides, Quader will hold a joint meeting with the general secretaries of the AL's different fronts and associate bodies at the party's central office on the Bangabandhu Avenue this morning.

Hasina is going to form the government for the third consecutive term as the AL-led grand alliance secured 288 out of the 298 seats in the national election. The AL itself bagged 257 seats.

On Tuesday, the Election Commission published the election results and issued a gazette notification in this regard.

The BNP got just five seats and the Gonoforum two. Manju-led Jatiya Party (JP) bagged one seat and independent candidates got three.

Outgoing ministers yesterday expressed hopes that the new cabinet members would play a key role in accelerating the pace of development.

After holding the office for 10 years, outgoing finance minister AMA Muhith said, “I think the change that has been brought is good….It is fine.”

Muhith, who turns 85 this month, smiled as he told reporters that he was glad that he didn't have to leave the post “in disgrace”.

“It is a matter of happiness that no one had to show me the door, I myself took farewell.”

At the commerce ministry, outgoing minister Tofail Ahmed told a farewell ceremony that the new faces in the cabinet were qualified and tested leaders of the Awami League, reports BSS.

“I hope the newly formed cabinet will play a vibrant role in accelerating the ongoing development. Bangladesh will witness new feats of development….” he said.

He urged officials of the commerce ministry to discharge their duties with sincerity and honesty to implement the ongoing development programmes within the next five years.

Addressing a farewell ceremony at the shipping ministry, Shahjahan Khan said, “I will not retire from politics till my last breath. I'll cordially accept any responsibility that Prime Minister Sheikh Hasina bestows on me.”

Former social welfare minister Rashed Khan Menon urged officials of the ministry not to neglect the plight of people with disabilities.

With the Election Commission not being able to give the number of press passes it has issued for today's election, there are allegations that many ruling party men managed the cards.

On the other hand, journalists of some mainstream media houses in Cumilla and Lalmonirhat alleged that they did not receive their press passes. Cumilla correspondents of television channels Maasranga and Ntv did not get those either, they claimed.

EC secretariat and returning officers in every districts issue cards to media personnel before election and, by using the cards, journalists can enter the polling centers to collect information.

While visiting the EC secretariat around 4:00pm yesterday, a correspondent of The Daily Star found many people were still waiting there to get their “press pass” and “vehicle stickers”.

Regarding the number of cards the EC issued yesterday, SM Asaduzzaman, director (public relations) of the commission said, “It is not possible to give the number now. It could be told tomorrow [today].”

Wishing anonymity, a number of Bangladesh Chhatra League (BCL) activists of Dhaka University told this newspaper that they had gotten blank press passes for the polls day.

“I have received around 200 press passes from a senior leader [of my organisation] who instructed me to fill the card with names of activists of different associate bodies of the ruling party.

I filled them up and, in the organisation category [of the card], I put names of different media houses at my will.”

Our correspondents from several districts also said they have heard such allegations. They said local ruling party men and even relatives of local top leaders allegedly obtained press cards using the names of so-called newspapers.

Meanwhile, several journalists from Cumilla said they did not get their pass cards until 8:00pm yesterday.

Masud Alam, local correspondent of Dhaka Tribune and Bangla Tribune, said, “Although, I am an active journalist, I did not get a press card but many post holders of local political parties obtained them.”

Imtiaz Ahmed, editor of local newspaper Ajker Cumilla, also did not get a pass.

“I am still trying to get a press card,” Imtiaz, also the local correspondent of Banglanews24.com, told our Cumilla Correspondent around 8:00pm yesterday.

In Lalmonirhat, local correspondents of Alokito Bangladesh, Naya Diganta, Sangram, and Jagonews were not given press cards until 8:30pm, reports our district correspondent.

Asked about the allegations, Asaduzzaman said the EC has already issued directives for press cards and, after proper verification, the cards were issued.

However, there are journalists who are also involved with politics and such allegations may arise in such cases, he added.

Police yesterday arrested two more people for their alleged involvement in the gang rape of a woman in Noakhali's Subarnachar upazila.

They are Hasan Ali Bulu and Jashim Uddin. Their names were not mentioned in the first information report, but police held them based on information gleaned from other arrested accused.

With the two, seven people, including Awami League leader Ruhul Amin who allegedly ordered his accomplices to rape the mother of four for voting for “sheaf of paddy”, have been arrested in connection with the rape that sparked protest and condemnation.

Four of them were mentioned in the FIR. Nine people were sued over the incident.

The name of Ruhul, also a former union parishad member, was not included in the FIR.

Talking to reporters, the SP said Bulu was the personal assistant to Ruhul. During investigation, it was revealed that Bulu had hired people for Tk 10,000 to rape the woman.

The police officer also said Bulu had an altercation with the victim at a polling station in Sunday's national election and he also threatened her following the quarrel.

“Whoever is the offender will not be spared,” the SP said, adding that they would arrest others involved in the incident soon.

The woman was gang-raped allegedly by 10 to 12 accomplices of Ruhul, who is the publicity affairs secretary of Subarnachar AL, at her home early Monday.

Meanwhile, expressing deep concern over the rape, Gonoforum President Dr Kamal Hossain yesterday said, “This incident put our democratic and fundamental rights, and the freedom of expression under threat.”

“The incident made us disgraceful as a nation. Such an incident is difficult to imagine in any democratic country.”

He also demanded the perpetrators be brought to book, said a press release of Gonoforum.

A team of Left Democratic Alliance yesterday visited Noakhali General Hospital where the 35-year-old victim was being treated.

It demanded immediate arrest of the culprits and their punishment through quick trial.

In another development, a delegation of 15 senior BNP leaders, led by its Secretary General Mirza Fakhrul Islam Alamgir, will visit Noakhali General Hospital today to enquire about the victim, said a release.