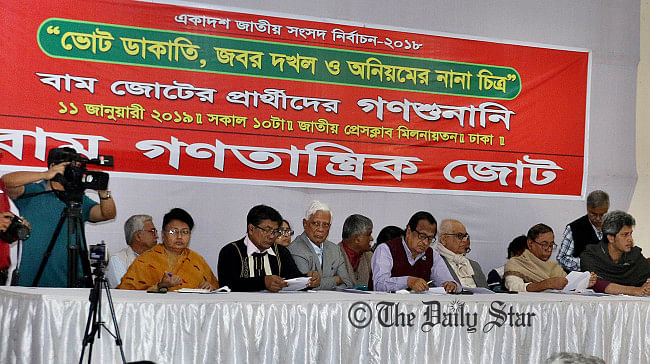 Ambassador of Switzerland to Bangladesh René Holenstein today said Switzerland commended all parties for their participation in 11th Parliamentary Elections in Bangladesh.

“Switzerland took note of the results of the 11th Parliamentary Elections and commended all parties for their participation in the process,” said Holenstein during a meeting with Bangladesh Foreign Secretary M Shahidul Haque today.

The Swiss ambassador deplored the violence that occurred before and during the elections causing unnecessary suffering and pain, according to a statement.

Referring to reported accounts of intimidation, irregularities and further obstacles to a level playing field throughout the process, which have tainted the electoral campaign and the vote, Ambassador Holenstein underlined the need to address these reports in full transparency and according to the rule of law.

“Switzerland trusts that the new Government of Bangladesh will uphold the democratic values it was elected upon and that it will support the people’s will to move towards democracy in full respect of human rights and fundamental freedoms,” he said.

He assured the foreign secretary that Switzerland looked forward to its continued partnership with Bangladesh.

A journalist has been arrested in Khulna in a case filed under the Digital Security Act for publishing “false” information on the number of votes cast in a constituency during Sunday's polls.

Hedayet Hossain Mollah, local correspondent of the Dhaka Tribune, was arrested yesterday, a day after the case was filed against two reporters, including him, with Batiaghata Police Station in the district.

The other accused is Rashidul Islam, staff reporter of the daily Manab Zamin, reports our correspondent in Khulna.

According to the initial announcement of the election results, the number of votes cast in Khulna-1 was higher than the total number of voters in the constituency. As the matter was brought to the returning officer's attention, he said it was a mistake and later came up with a correction, said local journalists.

By the time the correction could be made, the two media outlets ran reports saying the number of votes cast was around 22,000 higher than the actual number of voters, they said.

Documents provided by the returning officer's office showed 45,000 of the 2,59,420 voters did not cast their ballots.

The case statement said the accused published false, fabricated and provocative information on the voting with the use of electronic devices, including laptops, which might confuse people and create a chaotic situation.

Such activities made the “fair election” questionable, the statement said.

Mahabubur Rahman, officer-in-charge of Batiaghata Police Station, told The Daily Star that they arrested Hedayet near Gallamary Bridge in connection with the case.

However, several witnesses said the journalist was picked up near Picture Palace intersection in the city when he was returning home from the Khulna Press Club.

Hedayet's wife Sayida Laila Akhter told this newspaper that she called her husband over the phone but another man picked it up and introduced himself as the OC of the police station.

“Last night, the returning officer had requested my husband to apologise for the news. Otherwise, he said my husband would face action,” she said.

Despite repeated attempts, the RO could not be reached over the phone for comments.

Handcuffed, Hedayet was produced before a district court which sent him to jail.

Meanwhile, a former deputy secretary of the Election Commission has been picked up by detectives in the city's Agargaon area for “leaking information on the election”.

Shamsul Alam was allegedly collecting election results submitted to the commission from across the country and sending those to “others”, said police and EC sources.

He was picked up near the Nirbachan Commission office on Monday night, they said.

GG Biswas, officer-in-charge of Sher-e-Bangla Nagar Police Station, said the official was kept at the DB office on Mintoo Road.

Congratulatory messages have been pouring in for Prime Minister Sheikh Hasina and her party Awami League.

The Communist Party of China (CPC), the Developing Eight Organisation for Economic Cooperation (D-8) and the prime minister of Sudan in separate messages have congratulated Hasina and her party for the win in the December 30 parliamentary polls.

“Delighted upon hearing the victory of the Awami League [AL] in the 11th parliamentary elections of Bangladesh, the Central Committee of the Communist Party of China [CPC] wishes to extend to the AL our heartfelt congratulations,” said a CPC message on Friday.

It said the long-standing friendly relations between the two parties have played the role of political guidance in the development of Bangladesh-China strategic cooperative partnership.

“On the threshold of new and important opportunities for the development of China-Bangladesh relations, the CPC stands ready to strengthen exchanges and cooperation with the AL in our concerted effort to build a new type of party-to-party relations that seeks to expand common ground while reserving differences, and enhances mutual respect and mutual learning and to promote the steady progress of China-Bangladesh relations at an even higher level,” the CPC said.

Meanwhile, Sudanese Prime Minister Mutaz Musa Abdalla in another message on Friday said, “On my behalf and the People and the Government of the Republic of the Sudan, it gives great honour to extend our heartfelt congratulations and best wishes for Your Excellency's re-election as the prime minister of the People's Republic of Bangladesh.”

In a message issued on Thursday, D-8 Secretary-General Ku Jaafar Ku Shaari felicitated Hasina and the people of Bangladesh on the AL's re-election.

“We, in D-8 Secretariat, share the same spirit with and join the people of Bangladesh in celebrating the outcome of this election. This decisive victory is a reflection of the people's aspirations for a prosperous Bangladesh and a stronger position and more assertive role in international affairs,” said the statement.

Hasina led the AL to a thumping victory in the December 30 polls, in which the ruling party-led Grand Alliance secured 288 out of the 300 seats.