Hasina set for 20yrs as PM

Her fourth term, third in a row, begins as president administers oath to 47-member council of ministers she leads 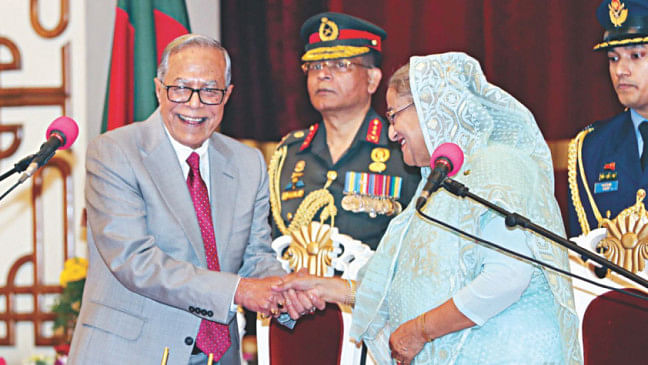 President Abdul Hamid administered the oath of office and oath of secrecy to Hasina and her new cabinet colleagues while Cabinet Secretary Mohammad Shafiul Alam conducted the programme at the Bangabhaban Darbar Hall.

After the swearing-in was over, Hasina signed the oath of office and oath of secrecy.

She has dropped 34 of the previous cabinet, including AL heavyweights Amir Hossain Amu, Tofail Ahmed, Mohammed Nasim and Matia Chowdhury, to induct 27 new faces and four former ministers into the council of ministers.

Of the 34 left out, 23 were full ministers, nine state ministers and two deputy ministers. Besides, Hasina chose two and dropped two of the four technocrat ministers who had resigned last month while forming the election-time government.

AL insiders say the prime minister picked new faces for the cabinet from the districts that had no representation in it for long.

Immediately after the cabinet members took oath, the Cabinet Division published a gazette distributing portfolios among them and the previous cabinet got abolished with this.

President Abdul Hamid is administering oath to the ministers and state ministers, of the Sheikh Hasina-led 47-member cabinet at the Bangabhaban yesterday. Photo: PID

Jatiya Party Chairman HM Ershad, who announced himself as the opposition leader in parliament, and his wife Raushan Ershad were not present at the ceremony.

Party insiders said Ershad couldn't make it due to illness. Five JP MPs including Fakhrul Imam, however, joined the programme.

Attired in a sky-blue jamdani saree, Hasina was looking confident. All gave her a standing ovation when she entered the Darbar Hall at 3:30pm. Minutes later President Hamid got in.

The ceremony began with the recitation from the holy Quran.

At the end of oath-taking ceremony, the president and the prime minister exchanged greetings with the new cabinet members and distinguished guests.

The PM exchanged pleasantries with the guests in the open field beside the Darbar Hall. She spent around an hour there.

Thousands thronged the Rajuk intersection to have a glimpse of the prime minister when she was on her way back home from the Bangabhaban.

After taking oath, Awami League General Secretary Obaidul Quader said members of the new cabinet must deliver as per the election manifesto of the party to retain their positions in the cabinet.

"Our prime minister is very serious about performances of cabinet members. Her decision will be strict in this regard. Those who will fail to deliver will lose their positions.

“Implementation of the election manifesto is one of our major challenges.”

He added: "The people of the country have taken the new cabinet positively. The cabinet involving new and old faces will be more dynamic.

“No one will be able to remain a minister without performing his/her duty with upmost sincerity. The formation of new cabinet will not create any internal feud in Awami League as there is no discontent over its formation.”

Responding to another question about dropping some senior leaders from the cabinet, the AL leader said, "It's not exclusion as it can be seen as changes in responsibilities."

Mentioning that the government and the party are two separate entities, he said senior leaders will now work for making the party well-organised.

“We should not say that they [senior leaders] were left out from the new cabinet… Their responsibilities just have been changed. They should concentrate on the party activities.”

Asked about not including anyone from allies, Quader said it cannot be said that leaders of the 14-party alliance won't be in the cabinet in the future.

He said the alliance partners in the grand alliance will support the new cabinet although they are not its members. The decision of Jatiya Party to perform as opposition party in parliament is good for democracy, he added.

Awami League Chief Sheikh Hasina takes oath as the Prime Minister for the third time at the Bangabhaban in Dhaka, Bangladesh on January 7, 2019. Photo: Reuters

After taking oath as information minister, Dr Hasan Mahmud said he would consider providing state assistance to good media outlets that fail to perform smoothly due to various obstacles.

"I'll look into how the state can assist the credible and good media houses in the truest sense -- they may be newspapers or televisions that can't do good work for various barriers," he told reporters after taking oath as minister.

Shahab Uddin, new minister for environment, told this correspondent that his first priority will be to tackle the adverse effects of climate change.

The new minister for health, Jahid Maleq, told The Daily Star that his first priority will be to improve quality of service in public hospitals and implement the ministry's ongoing development projects.

Sheikh Hasina along with members of her new cabinet is scheduled to visit the National Martyrs' Memorial in Savar this morning, party sources said.

The cabinet today approved the draft of 'The National Agriculture Policy 2018' incorporating nano-technology to control disease and determine generic nutrition.

Some new issues have been incorporated in the draft of the new policy including research on agriculture development, technology transfer and agriculture extension, mechanisation, specialised agriculture, ICT, marketing of agricultural products, women empowerment and nano-technology, Cabinet Secretary Mohammad Shafiul Alam told journalists after a cabinet meeting.

About the nano-technology in the agriculture sector, the Cabinet Secretary said, primarily nano-technology will be used to identify diseases in crops, determine the demand of generic nutrition and increase the capability of collection of nutrition.

Besides, sensor-technology will be used to examine the quality of land, he said.

The approval was given at the weekly meeting of the Cabinet held at Bangladesh Secretariat with Prime Minister Sheikh Hasina in the chair.

The policy aims to ensure profitable agriculture and nutrition and food security in the country, he said.

"The new agriculture policy has been formulated incorporating some new issues following the expiry of the Agriculture Policy 2013,"  he said.

Shafiul Alam said, "The main goal of the policy is to ensure food security and socio-economic development through productivity of crops, boosting production and raising farmers' income, diversifying crops, producing safe foods and developing marketing system, profitable agriculture and use of natural resources."

The cabinet also approved in principle the draft of "The Bangladesh Shishu Academy Bill, 2018" bringing some changes in the existing law.

The Cabinet Secretary said the draft bill is the updated version of the existing Bangladesh Shishu Academy Ordinance 1976 which was promulgated during the military regime.

In the draft bill, the post of director of Bangladesh Shishu Academy has been upgraded to Director General. "And the Director General will be a fulltime official," he said.

Shafiul Alam said the governance and administration of this academy will be entrusted with a 17-member management board headed by a chairman.

The other members will be Director Generals of Bangla Academy, Shilpakala Academy and Shishu Academy, Dean of Fine Arts Faculty of Dhaka University, joint secretary-level representative each from Women and Children Affairs Ministry, Finance Division, Social Welfare Ministry, Information Ministry, Cultural Affairs Ministry, Primary and Mass Education Ministry, Health Services Division and Shishu Kalyan Parishad and ICT Division as well as four persons, including at least two women, to be appointed by the government for their special contributions to development of children.

The cabinet secretary said a new provision has been incorporated in the clause 8 of the draft bill to confer fellowship titled 'honorary fellow' to the persons involved in flourishing children by their outstanding contribution to education, language, literature, Arts and culture, sciences and society.

There will be a 7-member committee for giving the Bangladesh Shishu Academy Honorary Fellow, he said.

Shafiul Alam said the headquarters of the academy will be in Dhaka, its branches can be set up in divisional cities on the government's permission.

Awami League President Sheikh Hasina is heading towards a fresh start forming her third consecutive government with 31 new faces of the 47-member cabinet.

The new cabinet will be comprised of 24 ministers, 19 state ministers and 3 deputy ministers.

Cabinet Secretary Mohammad Shafiul Alam announced the names of the lawmakers to be picked in the new cabinet.

The new members of cabinet members will take oath at the Bangabhaban around 3.30pm on Monday, he said at a press conference at the secretariat this afternoon.

THOSE WHO ARE GOING TO BE IN THE CABINET

Prime Minister Sheikh Hasina and the members of next cabinet are scheduled to be sworn in at the Bangabhaban on Monday.

“Prime Minister and members of the next cabinet will take oath at 3:30pm on Monday (January 7) at the Bangabhaban,” said Joynal Abedin, Press Secretary to President Abdul Hamid.

Meanwhile, President Abdul Hamid has invited Awami League President Sheikh Hasina to form government as she has gained the confidence of the majority of the members of the parliament.

The invitation came after the current Premier Sheikh Hasina went to meet him at the Bangabhaban this afternoon, said  Joynal Abedin.

Earlier in the day, the new parliament members including Sheikh Hasina were sworn in.

A grid failure at Haripur in Narayanganj resulted in shut down of a number of power plants in the country this evening, leaving many areas in the capital including parliament and Bangabhaban without power for up to an hour.

A number of areas including Tejgaon, Ramna, Bangshal, Kamalapur and Motijheel in Dhaka and many others in Narayanganj were affected by the power outage which started at 7pm.

However, the power supply resumed in Dhaka, half an hour later, said Kamrun Nahar, a spokesperson for the Dhaka Power Distribution Company Ltd.

Gono Bhaban and parliament were also affected but for only one minute.

Immediately after the power cut, top officials of the Power Development Board and DPDC were called at the PM's parliament office to explain the causes of the power disruption.

They informed that one of the phases of the Kalyanpur power supply line tripped off causing power cut at parliament and Gono Bhaban.

Prime Minister Sheikh Hasina made a courtesy call on President Abdul Hamid this afternoon at Bangabhaban and apprised him of the country’s overall situation.

The president and the prime minister exchanged Eid greetings during the meeting.

The prime minister apprised the president of various aspects of her recent Bulgaria, Japan and Saudi Arabia visits.

The president also discussed with the prime minister of various aspects of his recent visit to Bhutan.

On her arrival at Bangabhaban, the president welcomed the prime minister with a bouquet.

Secretaries of the President’s Office were present at the meeting.