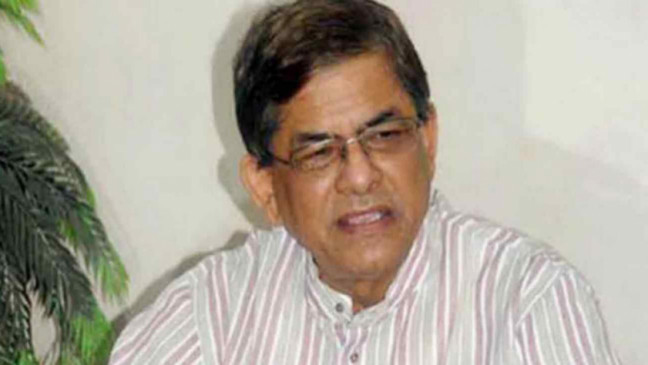 But, the BNP secretary general was defeated by AL candidate Ramesh Chandra Sen in Thakurgaon-1 constituency.

Sen bagged 2,25,795 votes with ‘boat’ symbol in all 175 centers while his nearest contestant Fakhrul got 1,27,067 votes with ‘sheaf of paddy’ symbol. Thakurgaon-1 constituency lies in Fakhrul’s home district.

"They (Awami League) think themselves as masters-they're the masters of the state. This has become their problem and they want to keep everything under their control," he said while responding to a question from reporters at his residence in Thakurgaon.

Awami League even wants to control how a political party will run its affairs though the constitution has guaranteed the right of all political parties to stage protest and hold meetings, he added.

Citing Awami League general secretary Obaidul Quader's statement that BNP does not have the courage or strength to hold meetings without seeking permission, Fakhrul said Obaidul Quader is suffering from "mental disorder".

The BNP secretary general said permission is required from Public Works Department (PWD) to hold meetings at Suhrawardy Udyan and from the police to do that on any street.

"The government comes up with one excuse or another for giving permission and gives its consent at the last minute. Then it becomes very difficult to successfully hold any meeting," he said.

BNP Secretary General Mirza Fakhrul Islam Alamgir today termed the government as “fascist” and called upon the party men to be united to go for a mass upsurge, restoring democracy in the country.

“We will go for a mass upsurge to restore democracy and to ensure release of Khaleda Zia and thus we are trying to unite people,” Fakhrul said this while addressing a programme at the Supreme Court auditorium in Dhaka this noon.

Claiming that “fascism” does not sustain forever, Fakhrul said, “Fascism is on and there is nothing except a person in the country. So, we will have to be united forgetting all difference in us.”

About BNP Chairperson Khaleda Zia’s release from jail, he said many accused like ministers and lawmakers in similar cases had earlier been granted bail while Khaleda Zia was being denied.

The BNP leader said people want ouster of the ruling quarter right now as they are suffering immensely due to the price hike of the daily commodities.

The BNP leader made the comments to The Daily Star at the Syedpur Airport in Nilphamari when he was returning to Dhaka from Thakurgaon after voting ended today at 4:00pm.

“This is the death of democracy,” he further added.

An activist of ruling Awami League (AL), who was injured in an attack allegedly by BNP men at a Rajshahi polling centre on election day, succumbed this morning.

With his death, the death toll from polls-violence reached 19.

Ismail Hossain, 50, died at Rajshahi Medical College Hospital where he was admitted after the attack, reports our Rajshahi correspondent quoting Abu Hena Mostafa Kamal, a senior doctor of the hospital’s ICU.

Deceased Ismail was the president of AL’s Election Steering Committee of Daogaon union in Godagari upazila.

HOW MAY PEOPLE KILLED ON ELECTION DAY?

Election violence claimed at least 18 lives yesterday, making it one of the deadliest polls in the country.

Among the dead, eight people were of AL and four of BNP.

WHAT IS THE ELECTION RESULT?

AL President Sheikh Hasina has led her party to a third consecutive win in parliamentary polls, securing two-third majority in yesterday's election held in an atmosphere dominated by the ruling party men.

Hasina is set to become the prime minister for the third straight time -- an unprecedented feat in the country's history.

Women in Noakhali-4 and Chattogram-2 constituencies alleged that ruling party men barred them from casting votes and harassed them physically.

In Noakhali-4, in front of Kallyan Pouro High School in Sadar, ruling party men barred a few women around 8:30am, our correspondent reports.

“The men told us that they will only let us cast our votes to Awami League,” the women said. “They also scuffled with us to not let us vote.”

In Chattogram-2 constituency, at Moddho Doulotpur Government Primary School polling centre of Fatikchori area, around 20-30 women alleged that ruling party men were bothering them as they were waiting in line to cast votes around 11:00 am.

“They also tried to bar us from getting out of our homes, but we managed to reach the centre, and tried to drive us away,” one of the voters said.

The Daily Star is not revealing the names of any of the voters because of their security.